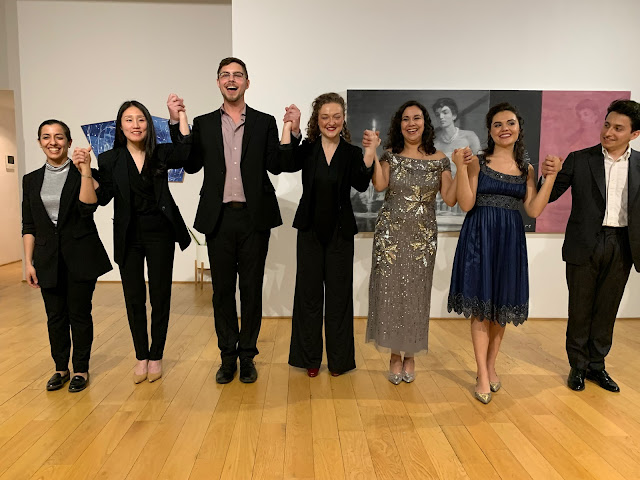 Maestro Michelle Rofrano, pianist Dura Jun, Nate Mattingly, Mary Rice,
Laura Soto-Bayomi, Kelly Guerra, and Scott La Marca
Last night, City Lyric Opera celebrated in high style with their Spring Gala, an auditory feast that was as bubbly as the bubbly that was served. We have been a fan of CLO for all six seasons and well recall when their name referred to their mission--opera that was accessible, relatable, and enjoyable. The name has changed but the mission has thankfully been preserved.
We don't know of any other opera company that is helmed and staffed by women and focuses on a female point of view. This past year, female composers have been celebrated.  Pauline Viardot's Cendrillon was a huge hit. Music Director Maestro Michelle Rofrano is now also the Artistic Director.
We were warmly welcomed by Megan Gillis, Co-Founder and Artistic Director, who announced the final offering of the season--Elizabeth Raum's The Garden of Alice. We had a sneak preview by means of an aria charmingly sung by soprano Laura Soto-Bayomi. To our astonishment, the aria was melodic which is a quality we rarely see in contemporary works. We are actually looking forward to seeing it! Watch our Facebook page for announcements.
Another major treat of the evening was that we got to hear THREE arias from zarzuelas! Zarzuelas are so full of passion and melody that we never fail to feel drawn into the story, even when there is only a solitary aria presented. Mezzo-soprano Mary Rice performed "Carceleras" from Chapi's Las hijas del Zebedeo with Latin flair and a fine Castilian accent. We loved the tongue-twisting rapid fire delivery, the intense rhythmicity, the word coloring, the gestures, and the polished vocalism.
Mezzo-soprano Kelly Guerra filled out "La Petenera" from Torroba's La marchenera with a rich tone and such brightness in the upper register that a soprano might envy. We particularly enjoyed the mercurial changes of mood.
From Vives' Doña Francisquita, tenor Scott La Marca performed "Por el humo se sabe dónde está el fuego" with intensity and passion.  The many "turns" on the vocal line were clean and precise. Mr. La Marca is gifted in conveying a mood as we heard in "Lonely House" from Kurt Weill's Street Scene which felt as lonely as an Edward Hopper painting. Furthermore, he created a very winning Nemorino in "Una furtiva lagrima" from Donizetti's L'elisir d'amore. By means of word coloration, he made each verse different from the others.  There was a very lengthy drawn out pianissimo on "morir" that had us holding our breath.
There were more Italian pieces on the generous program. Baritone Nate Mattingly seems to have a real flair for nasty characters, although he seems to be very pleasant in person. His mobile face and lengthy limbs serve him well in creating a character.  We wouldn't call Figaro a nasty character but he does have a nasty moment plotting against his employer Count Almaviva in "Se vuol ballare" from Mozart's Le nozze di Figaro. There are some rather colorful jokes for those who speak Italian that let us know just how nasty he is feeling. Don Basilio, on the other hand, is a truly nasty character always plotting to rain on someone's parade. Mr. Mattingly's delivery of "La calunnia" from Rossini's Il barbiere di Siviglia started with a whisper and built to a climax--the sound of the cannon. The way he rolled his "r"s had us laughing out loud.
From the same opera, Ms. Guerra did great justice to Rosina's "Una voce poco fa" in which the young heroine is also plotting--but not to hurt anyone else, just to get out from under the thumb of Don Bartolo. We enjoyed the steps she went through to come up with a plan.  There was not a bit of cliché in her performance,
Ms. Guerra is excellent at comedy. We are completely unfamiliar with Derrick Wang's opera Scalia/Ginsburg which has been around since 2015 but never produced in New York City (tant pis). We have been so fed up with boring contemporary operas that we began to tar them all with the same brush.  What a joy to hear excerpts from two that we enjoyed, one of which CLO will produce next month.  Perhaps they could be persuaded to do the Wang opera in the near future. The aria performed by Ms. Guerra, "You, Sir, are wrong here" was marked by clever rhymes and rhythms. We enjoyed every phrase.
Ms. Soto-Bayomi delighted us with "Stridono lassu" from Leoncavallo's  realismo opera I pagliacci. We have heard her perform it before and consider it her signature piece. For the opera to work we have to feel sympathy for a cheating wife and it is not only Leoncaallo's music that works on us but the artistry of the singer. In this case we saw the birds overhead and felt her longing for freedom.
Another side of her was shown in "Klänge Der Heimat" from Johann Strauss' Die Fledermaus.  There is our heroine disguised as a Hungarian countess and playing it to the hilt--a delightful performance.
There were also some ensembles on the program, well-directed by Mo.
Rofrano. The trio "Soave sia el vento" from Mozart's Cosi fan tutte allowed her to show her skill at balancing the three voices. In the quartet "Bella figlia dell'amore" from Verdi's Rigoletto each vocal line was given clarity and the whole exceeded the sum of the four parts.
Pianist for the evening was the talented Dura Jun who seems to be able to play handsomely in any style.
What a splendid evening! New York is fortunate indeed to have a company that can entertain us opera lovers so well; and young singers are fortunate to be valued and paid for their artistry.
© meche kroop
Posted by meche at 7:39 AM