THE RETURN OF AARON BLAKE 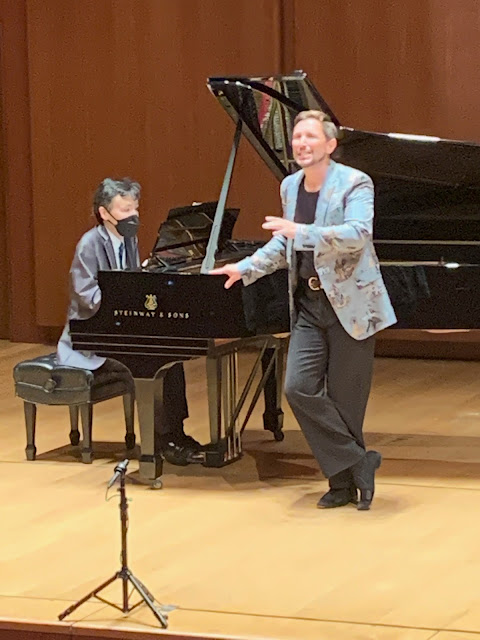 Aaron Blake and Ken Noda
Yesterday we had the good fortune of hearing a fulfilling recital at the Morgan Library given by tenor Aaron Blake with collaborative pianist Ken Noda. We have written about Mr. Blake for years; our familiarity with his artistry goes way back before he won the George London Competition in 2017 and now the George London Foundation had invited him back as a mature artist.
But we first heard him 10 years ago at the Licia Albanese-Puccini Foundation Competition Winners Recital when he sang "Oh Mimi, tu più non torni" from Puccini's La Bohème.  And how his career has blossomed! Since then, we have heard him singing with several opera companies and in various venues, from the lead in Gregory Spears' opera Fellow Traveller to an intimate gathering at one of Elad Kabilio's "Music Talks" where he dazzled us with Schubert's "Erlkönig". We even heard him sing in Czech (a rather bizarre Martinu opera) and in an adventurous production of Die Zauberflöte at the Mostly Mozart Festival.
This recital just added more lustre to his reputation.  The theme was "love in its many forms" and leaned heavily on our favorite period--Bel Canto. We thought we had our fill of this period the prior night at one of our salons at home (which we did not review, wishing to avoid a conflict of interests.) However, one can never have too much bel canto--like champagne.  The songs of Bellini and Donizetti served to highlight Mr. Blakes warm and flexible tenor and his artistry with fioritura.
Selections alternated between the two composers and moods varied. It is difficult to say which was "best" but we can say which ones moved us. We loved the contrast between the spirited "Me voglio fa' 'na casa" (Donizetti) and the propulsive "Malinconia ninfa gentile" (Bellini). The 6/8 time signature of Donizetti's "Il barcaiolo" had us swaying in our seat.
Mr. Noda, one of the most selfless collaborative pianists we have heard, was consistently superb.  Bellini's "La ricordanza" has a lovely piano introduction that he rendered with supreme delicacy.
The Bel Canto section was followed by another interesting set of contrasting composers--Richard Strauss and Tosti. If there is a more haunting melody than Tosti's "L'ultima canzone" we cannot name it. We love the contrast between the sorrowful introspection of the narrative interspersed with the lilting love song recalled by the narrator from happier days
Strauss' "Allerseelen" was meant to be sung at George London's centennial birthday, another casualty of Covid. We loved the way the final note just hung in the air; the entire audience seemed to be holding its collective breath.
A pair of Liszt's setting of the Petrarch songs lifted the excitement level. Again there was a lovely contrast between the anxious obsession of "Pace non trovo" which was introduced by the piano and the lyrical "I vidi in terra" with the piano inhabiting the upper register.  Again, the final note may have resolved harmonically but the effect was that of being suspended in air.
Perhaps our very favorite part of the program was Edgardo's aria "Tombe dei avi miei"  from Donizetti's Lucia di Lammermoor. We heard Mr. Blake sing this before (perhaps with New Amsterdam Opera?) and from it he wrings every drop of suicidal despair.
The last set of songs confirmed our opinion that American songs of the 20th c. belong in the art song canon without apology. We do believe that Steven Blier sees it the same way! We enjoyed George Gershwin's  "A Foggy Day" and Cole Porter's "It's De-lovely" meant to describe Nora London, and accompanied by a little Gene Kelly dance. Who knew Mr. Blake had such terpsichorean talent!
These jazzy numbers alternated with songs by Aaron Copeland.  "The Dodger" is amusing and Mr. Blake endowed the lyrics with abundant personality. The strophic nature of "Long Time Ago" must be Copeland's setting of a folk song; it reminded us of Brahms.
We were sitting there wishing the concert had ended on a more upbeat note; Mr. Blake and Mr. Noda made sure that it did.  The encore was the ever-popular "O sole mio" (by di Capua and Mazzucchi) expansively delivered. We left with a big smile.
What a well curated concert that was--a  real adventure departing from the standard "one set, one composer" tradition. Mr. Noda's piano was a true equal partner and Mr. Blake's admirable artistry was accompanied by a warm generous manner of addressing the audience, including some personal stories that left us feeling closer than in the usual concert.  Bravi tutti!
© meche kroop
Posted by meche at 7:13 AM