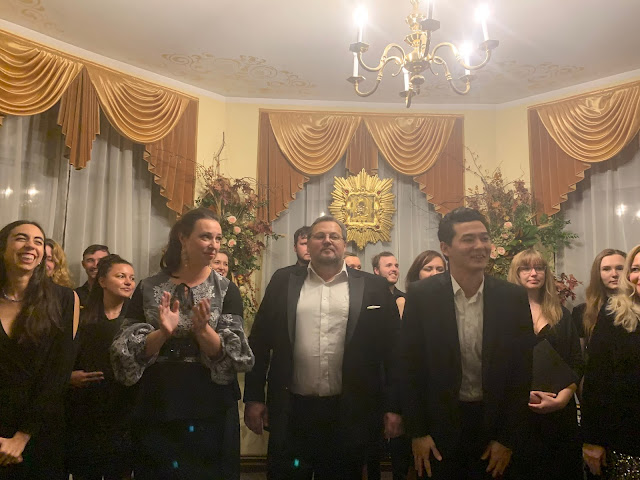 Eugenia Forteza, Zoya Gramagin, Mikhail Urusov, and Pavel Suliandziga
The charming theatre of St. Nicholas Cathedral was filled last night with lovers of Russian music. The varied program included operatic arias, art songs, and piano solos and duets. There was something for everyone! We were welcomed by Natalie Burlutskaya of Spotlight Artists Management as well as a pair of Patriarchs, one of whom welcomed us in Russian and the other in English.
The Chamber Chorus of the Cathedral both opened and closed the program. Sadly, we do not know what they were singing about but the harmonies were exquisite and delivered with commitment and sincerity.
Tchaikovsky got a great deal of attention with several selections from his opera Queen of Spades and Lensky's aria "Kuda, kuda" from Eugene Onegin, sensitively rendered by tenor Pavel Suliandziga. This must be his signature piece since we have heard him sing it several times. The young Lensky, in a trap of his own making, faces the upcoming duel with his friend Onegin and muses upon life and death.  What was a bit new this time (or maybe we hadn't observed it before) was the intensity with which Mr. Suliandziga sustained the feeling in the postlude, emphasizing the sorrow. There was also a diminuendo toward the end that was gracefully rendered. The performance elicited great sympathy for Lensky. "How misguided are the young" we thought, "making foolish and impetuous choices".
The selections from Queen of Spades were performed by sopranos Zoya Gramagin as Lisa and Eugenia Forteza as Polina and tenor Mikhail Urusov. The two women have very different voices and our favorite piece was their duet. We do believe that the role of Polina was written for a contralto but I heard no evidence of strain; it was just two voices of two friends in emotional concert. This worked in spite of the fact that Ms. Gramagin has a huge dramatic soprano and Ms. Forteza a gentle lyric soprano. We admired Ms. Gramagin's ability to reign in some of the power allowing Ms. Forteza's gentle spirit to shine. Ms. Forteza's solo aria could not have been better.
Ms. Gramagin certainly did have the opportunity to let out all the stops in Lisa's Arioso which was powerful and affecting. Similarly, in her duet with Mr. Urosov later in the program, she scaled her voice to match his huge sound and did not allow herself to be eclipsed.
Mr. Urosov made a powerful and frantic Hermann in both his solos. At times we found ourself wishing he would scale his voice to the room and allow other softer colors into his voice. Some contrast would have been welcome.
The art song portion of the program gave him and Ms. Gramagin another opportunity to perform a duet in Glinka's "Oh, do not tempt me without reason".
Mr. Suliandziga gave a lovely sweet performance of Tchaikovky's "Serenade" and Ms. Gramagin lent her impressive artistry to Rachmaninoff's "I am no prophet" and Tchaikovsky's "Whether day dawns" which, coincidentally, Mr. Suliandziga performed about 2 years ago at Around the World in Song.
As if all that gorgeous music wasn't enough, we also heard some wonderful piano pieces--a four-handed version of "Waltz of the Flowers" from Tchaikovsky's The Nutcracker, reminding us of our youthful passion for ballet. This was performed by Raina Wang in the treble position and Nikita  Stepanenko in the bass position. Mr. Stepanenko also performed Rachmaninoff's "Etude-Tableau Op.33 #6".
Rachmaninoff's "Prelude Op.23 No. 2" was offered by Alexander Chaplinskiy. It is always a pleasure to hear a collaborative pianist show off their solo skills. If only the piano had been of better quality, we would have enjoyed it even more.
Although we have always loved Russian instrumental music, we confess we didn't appreciate Russian vocal music until we started writing about it.  Now, we cannot get enough of it!
© meche kroop
Posted by meche at 7:15 AM No comments: 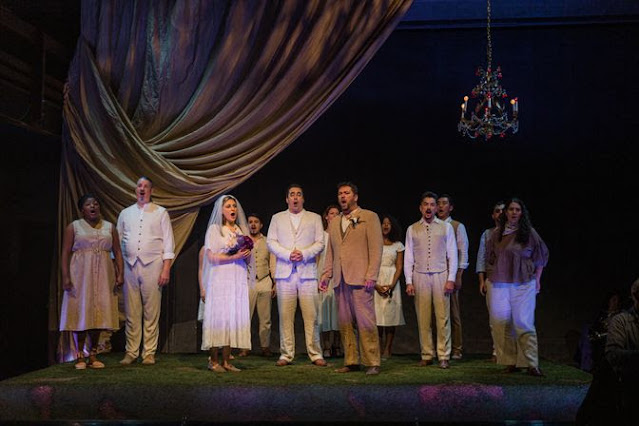 PRINCIPALS ALEXANDRA RAZSKAZOFF, MARCUS DE LOACH, AND JOHN BELLEMER
(PHOTO BY GUSTAVO MIRABILE)
Teatro Grattacielo is known for producing realismo operas that one is unlikely to see elsewhere. We have lost count of the the number of worthy works they have brought to our attention. So many of them have been heavyweight tragedies but yesterday's production of Mascagni's L'Amico Fritz was just what we needed after the prior night's tragic impact. For this we thank General Director and Artistic Director Stefanos Koroneos.
Cavalleria Rusticana is Mascagni's masterwork and we never ever turn down a chance to see it.  We recall seeing a rather odd production of his rather odd opera Iris at Bard College's Summer Festival a few years ago. But this may be our first exposure to the simple story of L'Amico Fritz.  Of course, any opera lover would have heard the "Cherry Duet" performed as a set piece.
This is a slight work but the simple story is easily relatable. A confirmed bachelor is tricked into marriage by his well meaning friend. In this case, the local rabbi David (baritone Marcus DeLoach) loves to get people married off but Fritz, a local landowner,(John Bellemer) is a confirmed bachelor. The nubile daughter (Alexandra Razskazoff) of one of his tenant farmers seems like a good match and David figures out a way to get them together. Bravi tutti!  A happy ending!
The outstanding features of the evening were the voices and the musicianship of the Queens Symphony Orchestra, conducted by James Bagwell. If the other two principal roles had not been so well sung, we would have said that Ms. Razskazoff ran away with the show. What made her performance so outstanding was not just her sweet finely produced soprano voice but her acting. She completely embodied a shy young country girl trying to deal with a crush on a man of high social status.
Due to the lack of a firm directorial hand by Mr. Koroneos and Malena Dayen, the cast pretty much stood around woodenly with nothing to do. Indeed it was billed as "semi-staged" but the fact that the theater has wrap around balconies that were put to use indicates that there was an attempt at story telling. The absence of set was unfortunate; a mere stepladder for Suzel to climb to pick cherries would have been welcome; we supplied one in our mind's eye. There was a huge chandelier that was eye catching but did not contribute anything.
Mr. Bellemer came alive dramatically as the evening progressed and Mr. DeLoach did his best but they seemed to be floundering onstage with nothing to do. We understand a concert performance in which singers use music stands but this was not the case. It would have been simple to have a couple pieces of furniture or props.
An attempt to involve multi-media seemed to us to be a complete failure. We will not mention the names of those involved but the projections were nothing if not distracting. We would not have minded a still shot in the background of a farm or a living room but the kinetic falling ellipses (cherry blossoms maybe) distracted from the singing. Even worse were the closeups of the singers' faces as they sang.
Costuming by Theresa Miles was generic but serviceable. Since the story is not particular to epoch or locale, it was fine. Except for Beppe, a gypsy of indeterminate gender whose costume was just weird.  Nonetheless, Mariya Kaganskaya did a lovely job with her aria.
There was a servant (Kiena Williams) and a couple friends (David Santiago and Rick Agster) who mainly just stood around and a chorus who made a nice vocal contribution.
Mr. Bagwell drew a lovely performance from the orchestra and we just loved the melodic arias and the aforementioned duet.
In sum, it was a delightful evening of music that only needed some directorial ideas and a few props to make it work as drama.
© meche kroop
Posted by meche at 5:41 AM No comments: 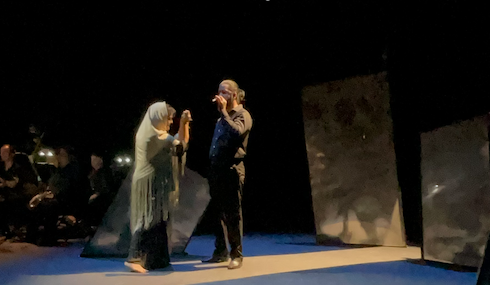 Nancy Fabiola Heerrera and Gustavo Feulien in Astor Piazzolla's Oblivion
The post-covid season of opera has been slow getting started, but for a weekend of delights we can thank the newly revived Opera Hispanica,  which has joined forces with Teatro Grattacielo. With Maestro Jorge Parodi at the helm, it seemed quite natural to begin with a work by Argentinian master of tango--Astor Piazzolla.
The first half of the program was his 1982 Oblivion which was used in the film Enrico IV. At this late stage of his life, Piazzolla was already famous for incorporating many musical styles into his tangos, from baroque to jazz. This work can be performed in a variety of instrumentations and we were fortunate to hear members of Metamorphosis Chamber Orchestra conducted by Maestro Parodi himself, comprising a string quartet augmented by flute (doubling on piccolo), oboe, trumpet and French horn. Double bassist Pedro Giraudo did some ear-catching riffs of rhythmic vitality and pianist Rodrigo Ilizaliturri provided support and unification to the individual parts.
The star of the instrumentalists was, of course, bandoneonista Rodolfo Zanetti, whose performance was filled with vitality. The structure of the work is a series of songs, mainly about the suffering of lost love. Baritone Gustavo Feulien, whose Onegin we so admired a couple of years ago, sang with full tone and a depth of anguish in voice, facial expression, and body language. A powerful singer as he is can make you feel the torment in one's own body.  Indeed, who has not loved and lost and suffered!
There were interludes of instrumental music, sometimes a tenderness given to the strings, sometimes a harshness given to the winds. Maestro Parodi kept a firm hand and a gentle touch, as called for by the music. Mezzo-soprano Nancy Fabiola Herrera made only a brief appearance but starred in the second half of the program in which Mr. Feulien only showed up incidentally.
Manuel de Falla's El Amor Brujo began life as a work commissioned by a renowned flamenco dancer and was scored for voice, actors, and chamber orchestra.  Its 1915 premiere in Madrid was not successful; it has gone through a number of changes--getting scored for full orchestra and a suite for piano and has also been performed as a ballet.
Ms. Herrera's electrifying performance gave full attention to both vocalism and dance. Not for a moment did our attention lapse as she created the role of Candela, a gypsy woman haunted by her dead husband. Dressed in black she haunted the stage, or rather the cave in which she sought una bruja to rid her of the ghost. Swirling her mantilla madly she employed a style of singing verging on the jondo flamenco style. Boundaries were transcended on the part of the artist and the audience; we nearly forgot we were in the theater. It was one of those performance one is unlikely to forget.
Troy Ogilvie is credited as choreographer yet Ms. Herrera's performance seemed spontaneous. The set and lighting design was by Jon de Gaetano; it was simple but effective--a few reflective box-like elements scattered about the stage.  At times they were lit so that they appeared as fireplaces, which was particularly effective. Direction was by Malena Dayen. The excellent subtitles were credited to Francisco Miranda
© meche kroop
Posted by meche at 3:43 AM No comments: