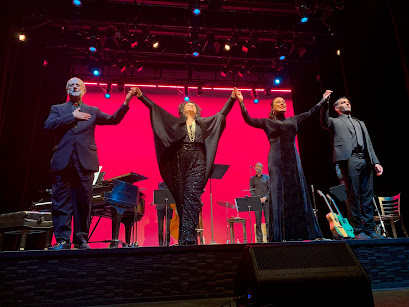 Pablo Zinger, Verónica Villarroel, Sonia Olla, and Ismael Fernández
Last night found us at the stunning theater of El Museo del Barrio for an exciting evening of Spanish music presented by the newly reborn Opera Hispanica. It was an exciting evening for us, dear Reader, not just because of the thrilling performances, but because we were there at the original birth of Opera Hispanica some years ago, with Daniel Frost Hernandez at the helm. We were overwhelmed with excitement that New York City would have a company to bring Spanish music to the forefront of the cultural scene.
And now, with brilliant conductor Jorge Parodi at the helm, Opera Hispanica is receiving a timely rebirth, just when we need Spanish music the most. Two years of pandemic restrictions and isolation have left our populace low in spirits and what could be better than Spanish music to lift them from lethargy to passion!
The title of the program Y Volver (I will come back) is not only the title of one of the songs on the program (Jorge Ramón Lucero/María I Lo Forte) but also symbolic of the comeback of Opera Hispanica and the comeback of the arts in NYC.
Starring in this extravaganza were world renowned Chilean opera star Verónica Villarroel,  Spanish flamenco dancer Sonia Olla, Spanish cantaor Ismael Fernández, and Uruguayan pianist Pablo Zinger who used his multiplicity of talents to provide interesting commentary on the program as well as to accompany.  As Musical Director, he also arranged many of the selections.
Before telling about the program, let us mention the fine guitar work of Olli Hirvonen, the double bassist Pedro Giraudo, and the percussionist Danny Mallon. Yang Yu's lighting design comprised brilliantly colored washes on the rear screen that consistently set off the artists' costuming and set the mood. As far as Anthony Riveron's sound design, it is worth mentioning, since we have no affection whatsoever for amplification, that is was never overamplified.
The program itself demonstrated the wide variety of Spanish and Latin American music. Not only was the singing in crossover mode but also the instrumentals.  Boleros, tangos, canciones populares, and Spanish art song existed side by side and melded into a guisado deliciosa.
Regular readers could probably guess that our personal preference lay in the unamplified delivery of Carlos Guastavino's "La Rosa y el Sauce", a tender art song that never fails to touch our heart. We have no doubt that Ms. Villarroel's voice could have easily filled the theater without amplification for the entire evening which we would have preferred.
Each artist had at least one selection that was unforgettable. Isaac Albéniz' "Tango in D" was stunningly delivered by Mr. Zinger and Mr. Giraudo.  We think Mr. Zinger must have a special connection with Albeniz because his performance of "Cádiz" was performed with particular attention to a gorgeous recurrent theme that lingered in the ear.
Mr. Fernández' emotional performance of Astor Piazzolla's "Oblivion" gave a flamenco slant to the tango master's composition,  accompanied by Mr. Zinger with Mr. Hirvonen's guitar solo capturing the ear.
Flamenco dance has long been a subject of our admiration but we have eschewed the sanitized over-choreographed performances that seem to have taken over the stage in recent years. We will probably never get to see a real tablao in a cave in Seville but Ms. Olla's performance surely satisfied our yen for authenticity. Her precise footwork was marked by rhythmic intensity; her arms were exquisitely expressive; the arch of her back was perfect. In one number she made great use of an enormous red mantoncillo--at first covering her entire body like a curtain and then swirling it around with great poetry of motion.
We always love the Canciones Españolas Antiguas which were arranged and popularized by Federico García Lorca; in this case they were jazzed up and amplified which may have pleased other members of the audience more than me.
Similarly, the romantic songs of the Mexican composer Maria Grever are among our favorites and we heard "Júrame" and the lovely "Te quiero dijiste".  Just the phrase "muñequita linda" gives us goosebumps. We would have preferred less jazziness. Still, we are always happy to witness a celebration of female composers. The program ended with the lovely "Gracias a la Vida" by Violeta Parra.
We have a quibble (when don't we?) that will not surprise our regular readers.  That quibble is the loathed music stand.  Just as amplification interferes with our auditory appreciation of a singer's natural voice, so does the music stand interfere with our visual connection. A phrase begins, we connect, the singer glances down, the connection is broken.  Just sayin'!
What we have seen and heard of Opera Hispanica' season has been exciting and rewarding. There is more to come and we refer you to www.operahispanica.org for details.
© meche kroop
Posted by meche at 8:10 AM