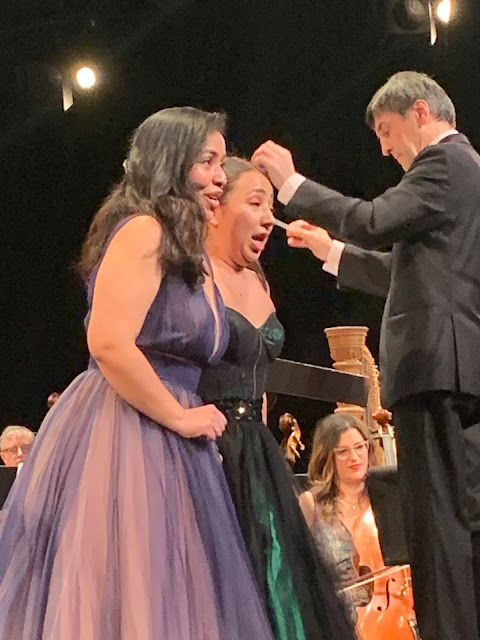 Sasha Gutierrez, Rosario Hernández Armas, and Maestro Predrag Vasic
Last night was special. It isn't every night that we get to witness two of our favorite young singers make a major step forward in their careers. We have been enjoying the scintillating soprano Sasha Gutiérrez and the marvelous mezzo-soprano Rosario Armas for the past few years but we have never heard them with full symphony orchestra. There is quite a difference between hearing a singer with a pianist in a small venue and hearing that singer in a large theater with full orchestral backing.
We were more than usually impressed by the manner in which these two lovely voices floated above the orchestra. The selections were wisely chosen both in terms of repertoire that suited their voices and personalities and also for accessibility by the audience, members of which may or may not have been opera fans. We are quite sure, as evidenced by the enthusiastic applause, that more than a few audience members became opera fans on the spot!
Each artist had a chance to shine alone as well as to exhibit her ability to share a duet with harmony of voice and spirit. "Si. Mi chiamano Mimi"  from Puccini's La Bohême can make or break a soprano so we are happy to report that Ms. Gutiérrez made a lovely Mimi. She made use of an affecting timbre and fine vibrato to limn the character of the shy seamstress introducing herself to her writer neighbor in a beguiling fashion, just short of flirtation.
Later in the program she showed her versatility by performing  Elena's Act V aria "Mercè dilette amiche" from Verdi's I vespri Siciliani. At this point in his long compositional career, Verdi still made abundant use of bel canto ornamentation and we enjoyed the artist's facility with fioritura, especially the very fine trill. We also noted how she brought variety to each verse.
Rosario Hernández Armas has an ample voice with true mezzo-soprano texture and endows everything she sings with individuality.  Last night she gave a powerful performance of La Principessa Eboli's aria "O don fatale" from Verdi's Don Carlo which we saw last month at The Metropolitan Opera. In this aria, Eboli blames her good looks for leading her into moral difficulties. It is as emotionally demanding as it is vocally challenging and Ms. Armas met the challenge successfully.
Fortunately we got to hear another aspect of her gifts in the "Habanera" from Bizet's Carmen, sung with self assurance in fine French. She played it straight with out indulging in the cliché of seductive posturing.  It was all in the vocal timbre which we found dusky and seductive.
Hearing the two women in duet was even more exciting. There was a lovely balance between the two in "Ah, guarda sorella" from Mozart's Cosi fan tutte. This was a perfect choice and came across as totally believable.
The harmonies of the voices came across even more than the silliness of Ms. Gutierrez' Fiordiligi and Ms. Armas' Dorabella. It probably has not been too many years since these two young artists were that age!
The characters in the Venice act of Offenbach's Les Contes d'Hoffman are meant to be somewhat more mature but our two lovely ladies were just as convincing as the courtesan Giulietta and Nicklausse, Hoffman's muse. The story halts here giving time and space for this gently lulling barcarolle "Belle nuit, o nuit d'amour". Such exquisite harmonies!  Such Gallic phrasing!
The UN Symphony Orchestra was conducted by Maestro Predrag Vasić and the program contained many lively pieces suited to the holiday period, particularly waltzes from Johan Strauss Jr.
We found pleasure also in "A Little Fanfare for a Dream", a contemporary piece by Alex Craven which was surprisingly melodic and well orchestrated. It concluded with a bright and brief brass chorale.
This was a night well spent!
© meche kroop
Posted by meche at 7:41 AM