BRUSH UP YOUR SHAKESPEARE 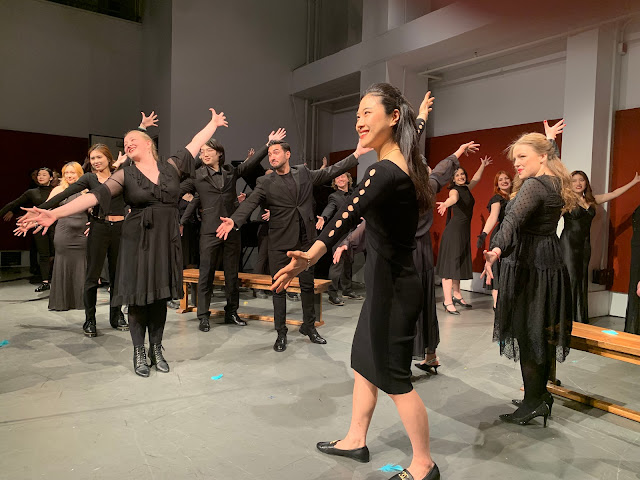 Students of Undergraduate Opera Theatre at Manhattan School of Music
"Brush up Your Shakespeare" from Cole Porter's Kiss Me Kate ws indeed the encore number of Scena Shakespearean: Scenes by the Bard and a clever choice indeed to end a delightful evening of scenes conceived and directed by A. Scott Parry who seemed to know exactly what to do with these talented youngsters, giving so many of them time onstage. It was difficult to decide who had more fun, the students or the audience.
Scenes were chosen from among works created in the 17th c. right up to the present time and languages included not only English (of course) but also German, French, and Italian. Coaches who accompanied the scenes were Travis Bloom, Djordje Nesic, and Chun-Wei Kang. There was no costuming and no sets; just a couple of benches and a stepladder. It was the fine direction, singing, and acting that provided such delight.
There were way too many admirable performances in the twelve scenes for us to single out any individuals so we will just share with you which scenes we enjoyed the most. Tops on the list was the final fugue from Verdi's Falstaff. Young singers rarely get to tackle anything by Verdi so it came as a delightful surprise. We have never taught or coached singers but we can't help wondering why, in a small hall and no orchestra over which to project, young singers cannot be given the Verdian experience. We would have loved to have heard the three witches from Macbeth, for example, or something from Otello.
On the other hand, the finale from Thomas Adès The Tempest has a stratospheric tessitura that was a bit much to tackle. What we most enjoyed was the terpsichorean Ariel. We heard a potential Queen of the Night.
We suppose these young singers will have to deal with contemporary music (more's the pity) but Anthony Davis' score for Lear on the 2nd Floor seemed to have nothing to do with Shakespeare and everything to do with a jagged unmusical vocal line.
Far better was the Act II trio from Berlioz' Béatrice et Bénedict in which the three young women filled the performing space with resonant overtones, so pleasing to the ear. Similarly the duet finale from Händel's Giulio Cesare had some gorgeous harmonies, as did the selections from Nicolai's Die lustigen Weiber von Windsor.
As far as more recent works, the prize goes to Bernstein's West Side Story in which Stephen Sondheim's lyrics and Bernstein's music joined to create what we consider a 20th c. American opera. Argue with us if you must!
© meche kroop
Posted by meche at 3:45 AM