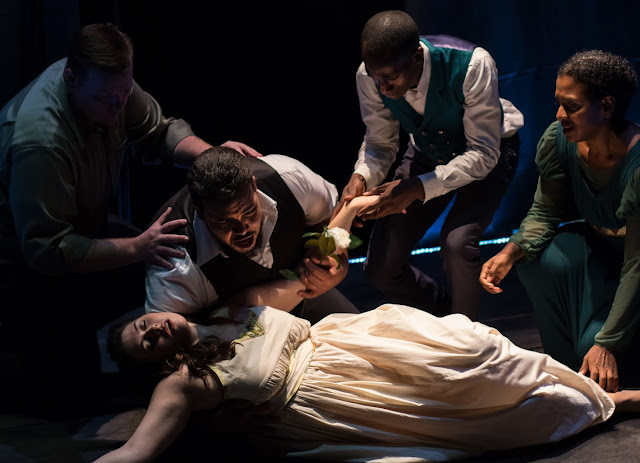 ALL HAIL THE DON AT SANTA FE OPERA

PUCCINI'S SPAGHETTI WESTERN (or Minnie, Get Your Gun)

DING DONG THE WITCH IS DEAD

We loved hearing the original German, although the projected titles were not translations of the German that we heard sung but rather rhymed couplets belonging to an English translation. Happily, the singing was as fine as the German diction.

Jessica Doolan has a lovely soprano and an engaging manner that made her a fine  childlike Gretel. Jessica Gonzales-Rodriguez' mezzo-soprano made a satisfactory Hansel but we hope that she will do some work on mastering masculine mannerisms, in order to be more believable in a pants role.

We particularly enjoyed baritone Louis Ong as a forceful father appropriately concerned about his children. Mezzo-soprano Rachael Gomes portrayed the Mother.  As the cannibalistic Wicked Witch, Isabella Stollenmeier needed a big dose of nastiness to be convincing, whereas Yen Yu Chen was all sunshine as the Dew Fairy. Rebekah Hartie did well as the Sandman.

The major pleasure of the evening lay in Maestro Chambers' effective conducting of the reduced orchestra in which the horn and clarinet played major parts.  Humperdinck made liberal use of folk melodies which he orchestrated with fine harmonies reflective of Wagner.  There were moments in the overture when we thought of Parsifal. The prayer is familiar, as is the sibling dancing song. But it is always a treat to hear the entire score.

We were not thrilled with Lisa Nava's direction.  Many of the instructions in the libretto were ignored and the characters rarely faced one another.  It appeared as if they were directed to face the audience. The four singers never seemed to form a family.  We wanted more menace from the witch.

The setting comprised a couple of tree stumps and some brooms made of twigs.  Nothing more was needed. Costumes were cleverly improvised with the Dew Fairy making quite an impression with her sunny yellow dress and parasol.

On the whole, Manhattan Opera Studio provided a delightful exposure to this wonderful opera.  We  were able to hear a single cast but would gladly have heard it twice.

OPERA TO DIE FOR


Judith Fredricks, Artistic Director of Opera New York, came up with the perfect theme for last night's Opera/Cabaret at The Metropolitan Room--it was all about operas ending in death. But she also came up with a compensatory final scene illustrated above--the "Libiamo" from Act I of Giuseppi Verdi's masterpiece La Traviata--a celebration of life.  This masterstroke ensured that the audience would leave smiling, not weeping over the sad fates of Violetta, Cio-Cio San, Turridu, Carmen, and Tosca.

Scenes from each opera were extracted and presented with narration by host Jason Graae (who plays a mean oboe).  The major focus seemed to be on Giacomo Puccini's Madama Butterfly. Soprano Veronica Loiacono made a touching Cio-Cio San with her intense acting matching the glories of her voice. As Suzuki, mezzo-soprano Jodi Karem made a fine supporting presence and tenor Edgar Jaramillo excelled as Lt. Pinkerton. We enjoyed the love scene, the flower duet which was performed in perfect harmony, and Cio-Cio San's lamentable suicide sung with heartbreaking intensity.

Scenes from Pietro Mascagni's Cavalleria Rusticana followed with a curious twist.  Ms. Loiacono performed the role of the seductive Lola which is normally given to a mezzo, and Ms. Karem took the lead as Santuzza, a role generally sung by a soprano!  That they both were extraordinarily effective is evidence of their versatility. Mr. Jaramillo took off his jacket and dug deep into the role of the fickle and ill-fated Turridu who gets stabbed offstage, in contrast with Cio-Cio San who committed hara-kiri in full view of the audience, leaving the ladies at our table gasping for breath.

Ms. Karem returned to her usual fach for the death scene from Georges Bizet's Carmen with Mr. Jaramillo as her murderously jealous lover Don José.  Ms. Loiacono jumped to her death as Tosca.

After these two brief numbers, a number of scenes from Verdi's La Traviata served to whet the appetite for the missing bits. Our tubercular courtesan Violetta was passionately performed by soprano Elena Heimur who had to negotiate three very different stages in Violetta's sadly truncated life.  In her Act I scene, performed with Mr. Jaramillo as her Alfredo, she is about to fall in love.  In Act II, after Mr. Jaramillo did justice to Alfredo's joy in "De' miei bollenti spiriti", she must face Alfredo's father with dignity.  And in Act III, she is on her death bed, exhausted by her illness, and collapses into Alfredo's arms.

Baritone Roberto Borgatti made a fine Germont Père, who has come to Violetta's country retreat to get her to make the ultimate sacrifice--to give up Alfredo whose scandalous affair is about to ruin his daughter's chance to make a favorable marriage. (Autre temps, autre moeurs!) Here, Ms. Heimur was called upon to show her nobility of character.

And Germont is required to begin with severity towards a woman of whom he disapproves and to end with some compassion for her.  Mr. Borgatti handled this beautifully, as well as his subsequent "Di provenza il mar, il suol", in which he must console his devastated son. We recall well Mr. Borgatti performing the entire opera a couple years ago with New York Opera Exchange. He was superb then and even better now.

The versatile accompanist for the evening was pianist and Artistic Director Michael Pilafian.  Significant contributions came from Mr. Graae's oboe.

This program will be repeated Sunday night at 7:00.  It is not to be missed!  It's a fine way to introduce people to opera in a relaxed setting and minus the longueurs.

Additionally, there will be two nights of operetta at the same venue on Thursday at 7 and Friday at 9:30.