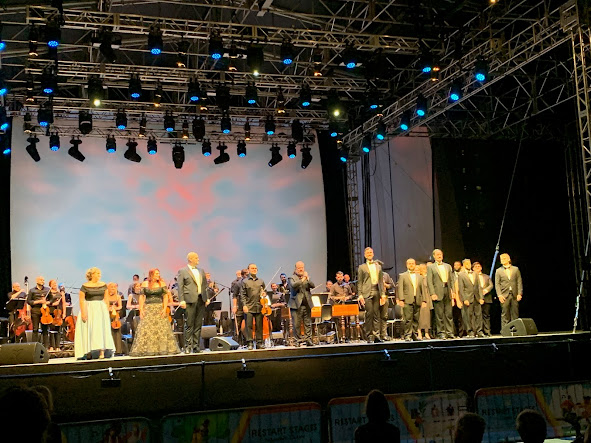 Maestro Will Crutchfield and The Teatro Nuovo Cast and Orchestra

Last night's production of Gioacchino Rossini's comic masterpiece Il barbiere di Siviglia at Damrosch Park was a joy to behold and a night to remember. The New York City opera community has been starved for live opera for over 16 months (but who's counting?) and Maestro Will Crutchfield served up a tasty dish that was completely satisfying but also left us eager for the next meal.

There was something for every taste.  Those who appreciate scholarship had access to some extensive program notes online which we were glad to have read in advance. Readers who are of the same mind can find them here

It was fun to learn more about the background of the opera, some of which we knew and other facts that were new to us. We never knew, for example, how flexible the composition was in terms of numbers that were created by the singers themselves. We were also unaware of the relative absence of fach in Rossini's operas.

We'd always been told what a departure it was for a soprano to take on the role of Rosina, written for a mezzo-soprano. Not so; categories had yet to be written in stone. Last night's Figaro, for example, was sung by bass Hans Tashjian--and very well sung we might add. We hadn't heard Mr. Tashjian since his multiple appearances with Dell'Arte Opera about seven or eight years ago and were delighted to witness the growth in his artistry.

Maestro Crutchfield devoted a great deal of time and effort in stripping the opera of years of accretions and, truth to tell, we didn't miss the shtick. Thankfully, in spite of a few judicious cuts (necessitated by consideration for the neighbors living around Lincoln Center), all of the scintillating melodies were there, melodies which are still spinning around in our head. Our feet were dancing their way down Broadway, thanks to Rossini's rhythmic gifts.

We can't help wondering where is today's Rossini. He or she is probably writing for Broadway, not for the opera house. We sometimes fail to remember that in the 19th c., opera was a popular art form, an entertainment; it was not about someone grinding a political axe.

Do we care if opera is "relevant"?   No we don't. Do we criticize the presence of stock characters and stereotypes?  We do not. Do we judge the opera for its sociocultural sensitivity? LOL.  We want to have a good time, and last night we did. Pardon our rant but we just had to go there!

As much as we encourage you to read Mr. Crutchfield's exegesis, one didn't need to know a thing about operatic history or scholarship to delight in the wacky story of Cesare Sterbini's libretto. The familiar 19th c. story of a possessive old goat and his subjugated ward has been turned on its head by Sterbini's creation of the subversively rebellious Rosina who outwits the old goat with the help of the wily Figaro, one of opera's most endearing characters.

The role of Rosina was sung by mezzo-soprano Hannah Ludwig who possesses  plenty of strength in the lower register and a brilliant upper register, well employed in a spate of highly original embellishments which, as we learned, Rossini encouraged his singers to devise, as did Maestro Crutchfield  We hope that Ms. Ludwig's artistic evolution involves knitting the two registers more seamlessly, since the decorations often served to highlight the lack of continuity.

The role of Count Almaviva was portrayed by tenor Nicholas Simpson whom we remember as a superb Charles II in Little Opera Theater of New York's production of Carlisle Floyd's Prince of Players and also as having risen above the world's worst production of Wagner's Tannhaüser in the title role. His bright clear tone was perfect for the role; we wanted, however, more clarity in the scale passages and fioritura.

Scott Purcell made a marvelous Doctor Bartolo with first rate singing and acting. The lecherous Doctor is not a likable character but in Mr. Purcell's hands he became a figure of sympathy.

Soprano Alina Tamborini came to our attention just 2 years ago, not only through Teatro Nuovo but also through Talents of the World Competition. We can never forget her performance of "Adele's Audition Aria" from Johann Strauss' Die Fledermaus. How happy we were to hear her again in the role of Berta to which she lent her crystal clear soprano and lovely phrasing.

Daniel Fridley made a fine Don Basilio; we just loved the scene in which the other characters tried to get rid of him. It occurred to us that this is a theme of this particular opera. In Act I, Almaviva tries to get rid of the noisy musicians. Later, Dr. Bartolo tries to get rid of Almaviva who is disguised as a drunken soldier.

Wil Kellerman made the most of his role as an officer, singing with clarity and acting with purpose and conviction.

With the shtick removed from the big arias, we were able to focus more on the beauty of the duets and the elaborate construction of the ensembles which Rossini used to bring each act to a climax-- leaving everyone exhausted.

The Teatro Nuovo Orchestra filled the plaza with a gorgeous carpet of sound. Maestro Crutchfield led from the cembalo, following the tradition of the early 19th c. First violinist Jakob Lehmann made significant contributions, as did Peter Ferretti who handled his contrabass as one of the characters in the drama.

We would hope to see Maestro Crutchfield "version" with sets and costumes some day, although we think the cast did a fine job of getting the drama across in what is called a "semi's staged" production. So delighted were we to hear live opera, we were in no frame of mind to attack the amplification; nonetheless, it did not exactly improve upon the singers' natural voices.

Furthermore, we were feeling rather tolerant of the titles projected behind the orchestra.  Lucy T. Yates and Maestro Crutchfield himself were given credit for the titles which rhymed but were not direct translations from the Italian. We dealt with it by ignoring them when we couldn't reconcile them.

Those were our only quibbles with an evening of delights, made even more delightful by sharing the experience in public with fellow opera lovers. We began by describing the opera as having something for everyone. Academics could enjoy the research that went into restoring the opera to something close to its origins. Neophytes could enjoy it for its good humor and tunefulness. Many might not have been aware of the cuts, the eliminations, or the original contributions. But everyone had a good time!