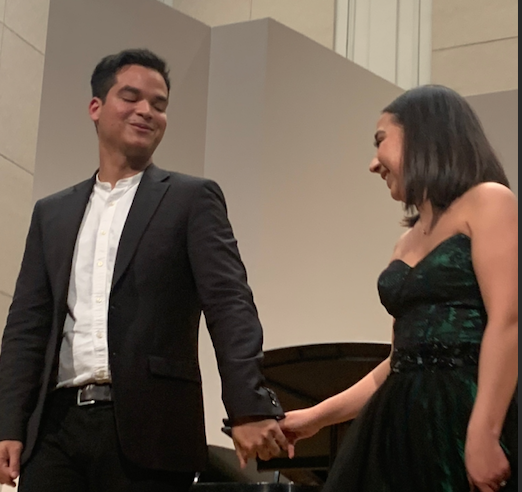 Ahmed Alom Vega and Rosario Armas
There are pleasant recitals, there are excellent recitals, and there are recitals that one will never forget.  Mezzo-soprano Rosario Armas, just completing her Master of Music degree at Manhattan School of Music, gave a recital in collaboration with her new husband Ahmed Alom Vega that has us groping for superlatives.
Before describing the program let us begin by trying to analyze what made this recital so outstanding.  There are a lot of great voices out there; many programs are designed to show off the singer in many languages and styles; but rare is a recital in which the singer's artistry is such that he or she melts into the character.
We were not at all surprised that Ms. Armas perfectly inhabited the character of Cherubino in the recent production of Mozart's Nozze di Figaro at Manhattan School of Music. However, doing the same thing in an art song is far more challenging.
For example, how many times we have enjoyed hearing a baritone singing Mahler's emotionally shattering cycle Lieder eines fahrenden Gesellen; on a rare occasion we have heard a female singer make an attempt, leaving us with a kind of negative opinion of singers tackling works meant for the other gender. Last night was completely different! It was the essence of the text that came across as Ms. Armas completely disappeared. (If a baritone ever does the same with Schumann's Frauenlieben und Leben we may very well fall off our chair.)
Serving the music and the text to this degree requires the abandonment of self indulgence. The narrator in this cycle is suffering from the loss of his beloved and in spite of the beauties of nature he sinks into despair.  Eventually his agony yields to a calm acceptance.  Ms. Armas limned each and every emotion; even if the listener did not understand the German (which our singer enunciated with Teutonic perfection) one could not fail to understand.
The narrator of Henri Duparc's "Au pays où se fait la guerre" is in a different type of despair. She is pining for a lover who has gone off to war. The text was performed in an even Gallic style but was no less affecting.  We couldn't help but thinking that the world hasn't changed much.  Men still go off to fight foolish wars and women are left to pine. Here, Ms. Armas' phrasing was accompanied by a very affecting vibrato.  Variety from one verse to the next was achieved by astute variations in dynamics and tempi.
Three Italian songs from three different periods permitted the appreciation of those lovely Italian vowels.  From the late Baroque period we heard "Sposa son disprezzata" from Vivaldi's Bajazet.  A lovely pianissimo aria was followed by a fierce cabaletta marked by clarity in the fioritura; the ritornello was given a different color.
"Non t'accostare all'urna" from Verdi's Sette Romanze is one of our favorite songs and as Ms. Armas performed it we felt as if we knew the woman who was singing the words and we knew her as if she were a character in an unknown opera. We wondered whether Verdi had intended it that way.
The more modern "Nebbie" is a real mood piece and we found it chilling in its intensity, achieved by both singer and pianist.
Two selections from Kurt Weill's Trois chansons reminded us that there is truly no difference between a cabaret song and an art song. If the singer has a great voice and sings unamplified, even a Broadway song can stand next to an aria.  There is an operatic depth of feeling in "Je ne t'aime pas" and plenty of irony and denial, all made clear by our marvelous mezzo by means of word coloration. "Youkali" came as somewhat of a relief from all that pain.
More pain was experienced in two selections from Manuel de Falla's Siete canciones populares with guitar accompaniment by Eduardo Gutterres.  The pain of "Asturianas" is a gentle sorrow but the pain of "Polo" is an angry pain--all made clear by Ms. Armas' Iberian intensity.  If we are not mistaken, we were first introduced to the artist when she performed the cycle some years ago!
After all that pain it was surely time for some exuberance and fun.  From Obradors' Canciones clasicas españolas, "El Vito" was given a raucous reading my Ms. Armas, Mr. Gutterres, and Mr. Vega providing rhythmic accompaniment on the cajon. This may be a good time to mention how outstanding we found his pianistic collaboration throughout the entire concert. We particularly noted it during a set of Burleigh songs when he gave the most delicate introduction to "Among the Fuchsias" and some lovely arpeggi in "Till I Wake". There were some impressive trills in the bass register in Mahler's "Die zwei blauen augen".  There were also some sharp attacks in the Mahler that emphasized the pain.
There were more delights to come in a spirited performance of "Yo soy Maria" from Piazzolla's tango opera Maria de Buenos Aires. Rodolfo Zanetti was featured on bandoneon and Nicholas Danielson on violin with both providing interesting solos. Pedro Giraudo played string bass and Mr. Vega, the piano.
An encore was enthusiastically demanded and Agustin Lara's "Granada" was the perfect ending to a perfect concert, sending everyone out smiling.
We have said little about Ms. Armas' vocal assets. There is absolutely nothing to criticize, not a single quibble. It is a rich sizable instrument with a lovely quality. There is ample resonance in the lower register and a bright expansive top. It is seamless in its transitions. Languages are perfect. Phrasing is always elegant. All of this "technique" disappears into the performance; Its perfection is what allows the listener to focus on the music.
We have the greatest confidence in Ms. Armas' future, both on the opera stage and as a recitalist. All doors should open for such an artist.
© meche kroop
Posted by meche at 6:26 AM