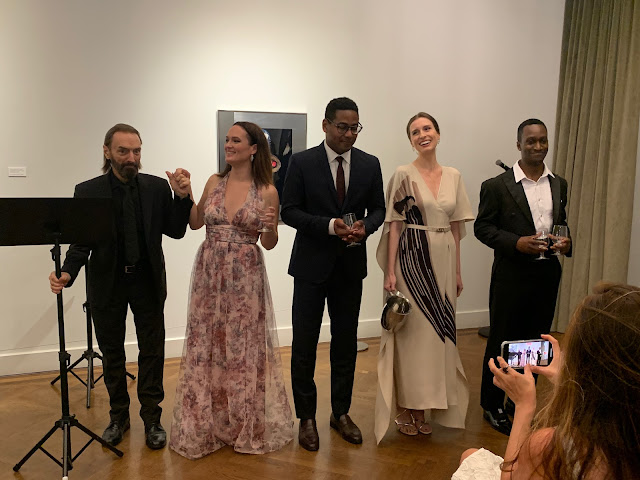 The title of Friday night's concert at the National Arts Club could be taken several ways--the goodness of the arts? the goodness of the artists?  In any case, a stylish and sizable crowd was ecstatic at the return of live vocal artistry provided in this case by Salon58. Unfortunately Loro Aroyo fell victim to Covid and was unable to attend in person but she was definitely there in spirit.

We got to hear lots of our favorite songs and arias and some of our favorite singers. Let us do the familiar SATB format!  But before beginning we need to get on our soapbox once again to urge singers to commit their songs to memory. The dreaded music stand made its appearance rather frequently and had the effect of hampering our connection with the singers.

Attempts were made to "act" but the precious connection was broken every time the singer glanced at the score, however briefly. We have been compelled to overlook this lapse on the occasion of a singer being a last minute substitution but there was no excuse Friday night. When there is a duet and one singer has made the effort and the other is "on the book", they cannot even connect successfully with one another. We will give our attention primarily to those selections that were best performed. Enough said!

Soprano Chelsea Bonagura had an enormous impact in her creation of the character of Lucia in the Donizetti tragedy Lucia de Lammermoor. It is important in the Act I aria "Regnava nel silenzio"  that the singer foreshadow Lucia's breakdown by being quite clear about the fragility of her sense of reality. Ms. Bonagura's bright clear voice and facility with fioritura were matched by her acting. We actually could see through her eyes the terrifying hallucinations. There were some delicately spun out notes that had us holding our breath and a killer trill.

We also admire Ms. Bonagura's superb diction in her performance of two songs in English. Every word was clearly enunciated and that is a rare thing.

Mezzo-soprano Mary Beth Nelson won our heart in her performance of "Non piu mesta" from Rossini's Cenerentola. She totally captured the graciousness of the character and utilized a perfect amount of vibrato in her clean fioritura and upward skips in the vocal line. Readers may have gathered that we love a good trill and we got more than one.

In the duet with Frank Mathis--"Only make believe" from Rogers and Hammerstein's Showboat, we admired her strength in the middle and lower register which were appealing in their resonance.

The aforementioned Mr. Mathis was listed as a tenor but we enjoyed the baritonal resonance in the lower range of his voice. He gave a most ironic and chilling laugh in "Vesti la giubba"  from Leoncavallo's Pagliacci  that seemed to foreshadow Canio's capability for the violence that would follow.

However, two of his songs (two of our favorites) suffered from some pushing for the high notes. I wish male singers of whatever fach would learn that "high" doesn't mean "loud". Pushing is distinctly unpleasant to the ear. We do hope that Mr. Mathis learns to float his high notes and that we get to hear Rachmaninov's "Spring Waters" and Strauss' "Cäcilie" again with more delicacy.

Bass Kofi Hayford demonstrated some fine French in his performance of "Vous qui faites l'endormir"  from Gounod's Faust. We enjoyed the sense of menace he projected as well as his full tone and the manner in which he alternated between a lovely legato and a pungent staccato.

Along with that fine showing of deviltry, he used a different color for Ibert's "Chanson à Dulcinée"  which we don't get to hear as often as the Ravel cycle.

There was some good ensemble work as well. Ms. Bonagura and Ms. Nelson made some beautiful vocal harmonies in "Dome epais" from Delibes' Lakmé.  But the delicious dynamic between the two characters was destroyed by the presence of the music stand.

We always love the first act trio from Mozart's Cosi fan tutte --"Soave sia el vento" --and was glad to see it on the program.

Piano wizard William Hicks always manages to give each singer the necessary support and we were glad to hear him again after the long lull in live performance.

We were still wondering about "Goodness Triumphs" when the program ended but never did figure it out unless it was referring to Cenerentola.