A WONDERLAND FOR OUR TIME 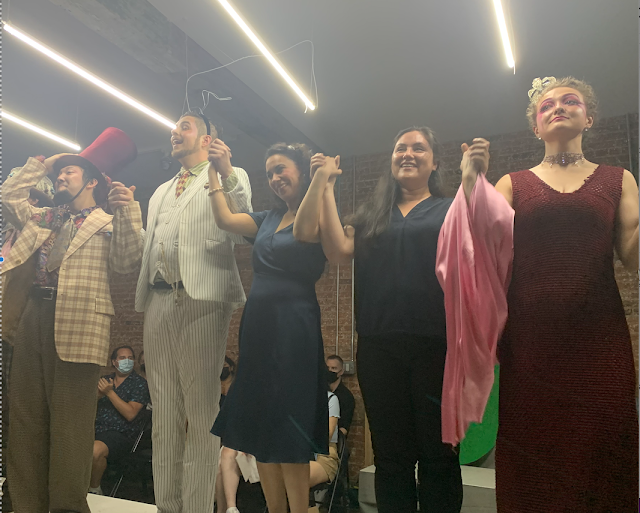 Robert Feng, Nathaniel Mattingly, Laura Soto-Bayomi, Maestro Danielle Jageleski, and Mary Rice
City Lyric Opera put The Blue Gallery to good use in their staging of Elizabeth Raum's "opera" The Garden of Alice, seen last week and still recalled as a remarkable piece of theater. It was a wild idea of Ms. Raum to create a work of music theater based upon Lewis Carroll's Alice's Adventures in Wonderland. We put opera in quotes because it is difficult for us to recognize it as such, save for the excellence of the voices we heard, which is why we have headed our review with a photo of the cast.
We urge our dear readers to look at one of our Facebook pages (Voce di Meche or Meche Kroop) to see photos of the unusual setting and wildly inventive costumes.
We have seen theatrical performances before that had been adapted from Carroll's surreal story and concluded that the book is basically a psychedelic trip with its concurrent hallucinations and surreal images and transformations.  Director Attilio Rigotti had other ideas. In the program, which we did not read until after the experience, his concept was about the Wild West nature of the electronic world, a world without truth where everything is a construction.
The concept is an interesting one with which we have no quarrel; it enabled and justified the use of all manner of electronic devices and projections including comments on the action filtered through the lens of twitter comments.
The staging was immersive and the audience and singers occupied the same room at the same time in a gallery that provides a number of spaces. There was quite a bit of moving around and each space had interesting features. The excellent six piece chamber orchestra remained in one place and when Maestro Danielle Jageleski needed to be conducting the singers in a different space, her image was presumably transmitted to the orchestra. The one flaw this created was that the sound of the orchestra as broadcast to another room was not the natural sound that we so enjoyed in the final scene of the work. This would seem to have been a necessary compromise.
The storytelling was of course episodic but the characters of the book which we recall were all present with the White Rabbit (a nattily dressed bass-baritone by the name of Nathaniel Mattingly) assuming an increasingly larger role in the story. He is the guide, so to speak, of Alice's adventures.  Soprano Laura Soto-Bayomi made a winsome Alice, keeping her cool in this strange environment.
Mezzo-soprano Mary Rice made a fine arrogant showing as both the Duchess and The Red Queen, wearing equally outstanding costumes for each role.  The most traditional operatic aria was delivered by soprano Gileann Tan in the role of the Dormouse.
We liked Ryan Lustgarten's performance as the falsely accused Knave of Hearts as well as Robert Feng's growly Mad Hatter. Baritone Steve Valenzuela was fine as the Caterpillar and the Cheshire Cat and Ramon Tenefrancia's tenor suited the March Hare.
The work is admittedly difficult to describe and must have been quite a challenge to stage with such "imagenuity", to coin a phrase. The female-centric City Lyric Opera has never shrunk from a challenge and the results were worthwhile. Contemporary opera seems to be fragmenting in all directions and who knows which pathway it will follow, but for the moment we enjoyed this production far more than the political diatribes that we avoid.  This work managed to be both entertaining and stimulating.
That being said, we still maintain that the major feature of the operatic art form is the unamplified sound of the human voice. The presence of electronics is, for us, a distraction.  We hope to hear each and every member of the cast in settings more conducive to vocal appreciation.
© meche kroop
Posted by meche at 7:31 AM