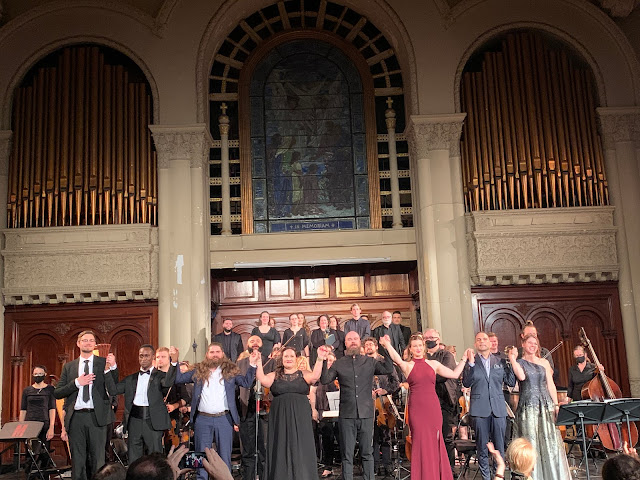 Nate Mattingly, Kofi Hayford, Arnold Livingston Geis, Katy Lindhart, Maestro Keith Chambers, Kathleen Norchi, Joe Lodato, and Laura Zahn
We have no idea what initiated Europe's fascination with Scotland in the early 19th c. but the stories of Sir Walter Scott were adapted by Eugene Scribe as the libretto for François-Adrien Boieldieu's opéra comique La Dame Blanche a full decade before another of Scott's gothic tales became the plot of Bellini's tragic opera Lucia de Lammermoor. Other operas with elements of the fantastic were to follow--Meyerbeer's Robert le Diable and Gounod's Faust.
Here we have the requisite castle in an exotic locale, a lost heir, a hidden fortune, and a ghost, a benevolent one. By virtue of the good graces of Maestro Keith Chambers' New Amsterdam Opera, utilizing the score donated by Maestro Eve Queler, who presented the work about 30 years ago with her Opera Orchestra of New York, opera lovers had an opportunity to thrill to Boieldieu's gorgeous melodies and some very fine singing.
A capacity crowd greeted the work with uncommon enthusiasm and gave the superlative cast the accolades they deserve. Maestro Chambers was in complete command of his orchestra, of which Stephan Fillare was concertmaster. Harpist Kate Sloat stood out by providing the soothing arpeggi running through the score at just the right moments.
The story concerns the fate of a castle in a Scottish town and whether it would wind up in the hands of the greedy steward Gaveston (sung by bass Kofi Hayford) or those of the tenant farmer Dickson (baritone Joe Lodato). The climatic auction scene resolves the bidding war and the castle winds up in the hands of the legitimate heir Julien (tenor Arnold Livingston Geis)  who had gone missing under strange circumstances and reappeared as the soldier Georges. Julien will marry the clever Anna (soprano Katy Lindhart) who was Julien' childhood sweetheart. Of course they will live happy ever after!
The work begins with a spirited overture involving sweet melodies alternating with a martial theme, and a frisky staccato one. One could be excused for thinking a ballet was about to follow since the overture was written by Adolph Adam, a pupil of Boieldieu who went on to compose the music for Giselle and Le Corsaire.
There is a celebratory chorus followed by Georges' entrance aria which announces his military profession. Mr. Geis evinced a full throated and well supported tenor which was given many more opportunities to shine. There was a lovely trio with Dickson and his wife Jenny ( soprano Kathleen Norchi) as the couple offer him hospitality and learn about the vagaries of his life.  Jenny's ballad about La Dame Blanche, the spirit guardian of the estate, was delivered with both wonder and soul. Ms. Norchi has a most appealing stage presence with a delightful feel for her character illuminated by a bright clear tone which soared over the orchestra. Mr. Lodato sang with geniality and firmness coloring his substantial baritonal resonance.
In Act II, we finally get to meet the heroine, the lovely and clever Anna who has also had a strange and varied history. Ms. Lindhart is blessed with a superb instrument that she knows how to play. We appreciated her very fine vibrato and an abundance of overtones in the resonance. In duet with the old housekeeper Marguerite (mezzo-soprano Laura Zahn) the blended voices of the two women gave Boieldieu's harmonies a splendid execution.  Moreover, their exaggerated facial expressions amplified the storytelling of Steven Herring as he narrated the plot points.  His text was originally written by Nico Castle and he added quite a bit. In a concert production we have never seen the singers use facial expression so successfully and we enjoyed every grimace and grin.
Mr. Geis got another opportunity to show off his sweet tenor in the cavatina "Viens, gentille dame" with horn accompaniment. There was a change in force and tempo and a return to sweet melody.  What a fine messa di voce we heard! The act ended with a brilliantly composed and well knit septet which one might say owes a debt to Mozart. Ms. Lindhart got to show off an enchanting glissando.
The final act gave her yet another gorgeous melodic aria with more glissandi and some descending scale passages offering all manner of challenges which she met effortlessly. We don't know the French word for fioritura but we loved it just the same.
Mr. Geis got yet another chance to shine in his final aria in which Georges recognizes the castle he grew up in.  What a wealth of vocal effect!  Descending arpeggi and upward skips, all joined by that glorious harp.
There is much to be done to resolve the plot involving a disappointed Gaveston, so well portrayed by Mr. Hayford's deeply resonant bass and mobile expressions, and a Justice of the Peace named MacIrton, successfully sung by bass-baritone Nate Mattingly with requisite attention to the officious attitude of his character. Fortune is found, truths are revealed, and the estate is settled.
What a coincidence that we reviewed both of these fine singers already this month, Mr. Hayford in a vocal concert at the National Arts Club and Mr. Mattingly in Garden of Alice produced by City Lyric Opera. Both reviews can be found by using the search function on this page.
Photos of the singers can be found on both our Facebook pages--Meche Kroop and Voce di Meche.
© meche kroop
Posted by meche at 8:29 AM