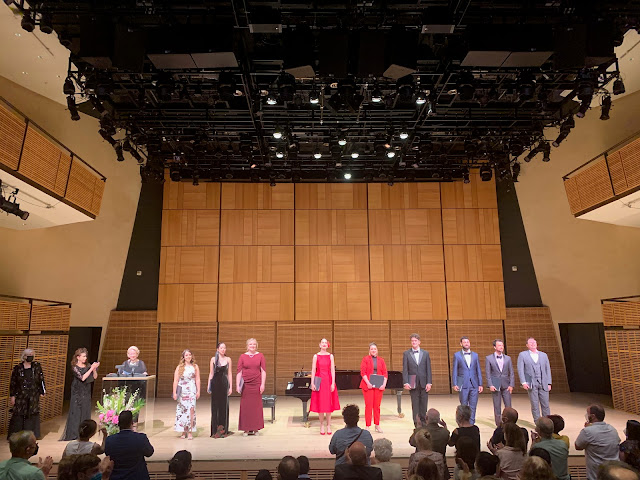 Arlene Shrut, Mary Pinto, Midge Woolsey, Ethel Trujillo, Yvette Keong, Teresa Perrotta, Evelyn Saavedra, Shannon Keegan, Gregory Feldmann, Eleomar Cuello, Kevin Godínez, and Eric Ferring
Oh, how we have missed the Gerda Lissner Foundation annual awards recitals! So much has happened in the past couple years--the sad losses of Stephen De Maio who gave so much to the opera community in so very many ways, as well as serving as president of the Gerda Lissner Foundation, and of Brian Kellow, longtime host of the annual concerts.
But the Foundation goes on with some welcome additions and changes.  As host we had the lovely well known Midge Woolsey who is another champion of young singers. And the best news of all was the institution of a Zarzuela and Operetta Division.  Regular readers know how fond we are of zarzuela  and how delighted we have been to see this art form represented increasingly on recital programs.
This division was chosen to replace the Wagnerian Division with the belief that young voices are better suited to Chapí than to Wagner. Thus we were fortunate enough to hear the lovely Mexican soprano Ethel Trujillo sing "Me llaman la Primorosa" from Giménez'  El Barbero de Sevilla.  This was a most apt showpiece for Ms. Trujillo's bright and well supported coloratura as well as for her ability to give herself totally to the character. There was a charming duet with the voice of the piano that we relished.
Costa Rican baritone Kevin Godínez gave us a powerful yet nuanced performance of "Junto al puente de la Peña" from Serrano's La Canción del Olvido, approaching his character with requisite confidence and presence.
Cuban soprano Evelyn Saavedra in a smashing red gown with a red flower in her hair and fan in hand created the character of a woman with two suitors in the well known "De España vengo" from Carné's El Niño Judio. Her splendid voice was matched by her acting and Hispanic presence.
In the Lieder Division, we were happy to reacquaint ourselves with baritone Gregory Feldmann and soprano Yvette Keong. Ms. Keong recreated the "Beautiful Dreamer" of Stephen Foster's masterpiece with effective word coloration. We loved her expressiveness and the naturalness of her gestures as well as the bright clear top and fine vibrato. Excellent enunciation made every word clear, a feature that is generally missing in sung English.
Mr. Feldmann delighted us with "Auf Der Brücke".  We can never get enough Schubert and Mr. Feldmann's unforced tone and dynamic variation did justice to the lied. The major/minor shifts were handled sensitively with different coloration and the German diction was perfect.
In the General Division, mezzo-soprano Shannon Keegan performed "Ô petite étoile" from Chabrier's opéra bouffe-- L'étoile, a charmer if we ever heard one. The aria has a delicate piano introduction but calls for the singer to crescendo into a powerful position. Ms. Keegan's voice has a most interesting texture and she used her personality to create a charming character. Her onstage poise was apparent when she gracefully silenced a premature applauder and continued the aria. It was a lovely moment.
We suppose every opera lover already knows the "legend" that Mozart wrote "Come scoglio" in Cosi fan tutte for a soprano he abhorred and deliberately made it challenging to defeat her.  We don't know if that is true or not but we do know that soprano Teresa Perrotta was undefeated! Oh, those challenging skips and demanding coloratura were no match for this brave Fiordiligi. We hope to see her this summer when we will be reviewing Santa Fe Opera.
Perhaps "Mein Sehnen, mein Wähnen" is one of Erich Korngold's most famous arias. Baritone Eleomar Cuello filled "Pierrot's Tanzlied" from Die tote Stadt with longing and nostalgia by means of an emotional vibrato. He swelled to a powerful climax, sustained the mood throughout the piano interlude, and ended with a gorgeous pianissimo.
Eric Ferring's arresting quality is a sweet unforced tenor tone with beautifully floated top notes. Although several of the awardees sang two selections which we have insufficient space to discuss, we must mention Mr. Ferring's contrasting choices. The even legato of the tormented De Grieux from Massenet's Manon, sung in true Gallic style, was contrasted with a fiery performance of "Il tuo sangue" from Handel's Ariodante. The fioritura was cleanly articulated and was the perfect invigorating end to this thrilling concert.
Collaborative pianists were Arlene Shrut and Mary Pinto about whom we have nothing but good things to say.
What a pleasure to have this competition back!  Such a benefit for these highly gifted young singers and such a thrill for us opera lovers.
© meche kroop
Posted by meche at 8:34 AM