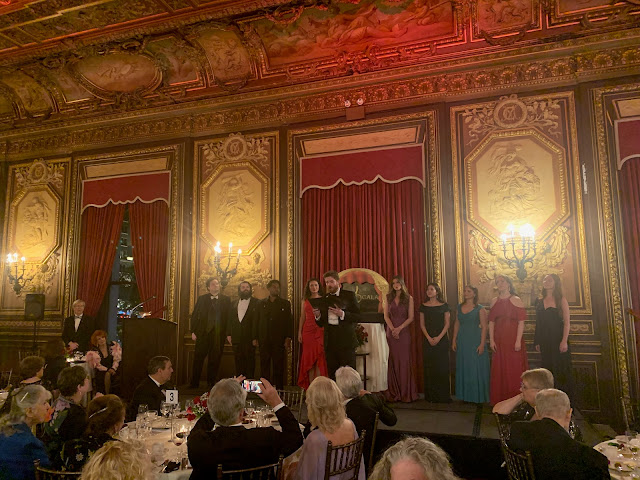 Career Bridges Grant Winners of 2022
The most gala of all galas was held last night at the Metropolitan Club to celebrate The Career Bridges Grant winners. It was particularly gala since it was the first "gathering of the tribe" since the onset of the Covid epidemic. What a grand pleasure it was to see all the luminaries of the opera world there to celebrate a new generation of young opera singers.
This was the 18th such celebration brought to us by that most glamorous and warmly welcoming couple--David Schuyler Bender and Barbara Meister Bender who co-founded the Schuyler Foundation for Career Bridges. For anyone who doesn't know about this worthy foundation, their mission is to help young singers to launch their careers, a mission dear to our heart. They accomplish this goal over a period of three years during which these talented young singers are provided with grants, expert mentoring, training, and performance opportunities. So far, there have been 160 grant winners and over half of them can be considered "launched" whilst 20 are having major careers.  Pretty good results, wouldn't you agree?
Part of the evening comprised awards given to notable luminaries of Planet Opera. The Lifetime Achievement Award was given to Maestro Eve Queler whose enviable conducting of the Opera Orchestra of New York at Carnegie Hall introduced us to many young opera singers who went on to major careers and also to rarely performed operas.  We recall climbing endlessly to reach the top balcony of Carnegie Hall, binoculars in hand, to participate in these highly anticipated events.
The Distinguished Achievement Award was given to Jane Shaulis who had a long distinguished career as a character mezzo and whom we know mainly from Opera Index, another group of opera lovers who support young singers with generous cash awards. Under her stewardship, generations of young opera singers have been brought to our notice. We were delighted by her sense of humor which brought wide and knowing smiles to those who understand the roles played by mezzo-sopranos. We do believe there is a rather funny song that describes that and if any of our dear readers can tell us the composer and title we will be forever grateful.
The entertainment part of the evening came as "courses" along with the food (dinner must be served) and we hope to hear each and every one of the award recipients in an environment where we might focus more intently on their artistry. Musical Direction and piano accompaniment was provided by Ted Taylor with impressive versatility--from Baroque  to Broadway. As a matter of fact, the evening began with Handel and ended with Broadway.
Accompanied by the sonorous trumpeting of David Glukh, mezzo-soprano Joanne Evans gave a fine account of "Or la tromba" from Handel's Rinaldo. We noticed and enjoyed the clarity of her fioritura.
Bass Matthew Soibelman delivered "In diesen heil'gen Hallen" from Mozart's Die Zauberflöte with consummate authority and depth of resonance at the bottom of his register.
From Richard Strauss' Der Rosenkavalier, soprano Kayleigh Riess  performed the Presentation of the Rose with the requisite air of innocence. She floated the high notes in a manner that any tenor would do well to emulate.
Tenor Thomas Cilluffo colored his fine tenor in the gentlest fashion for Duparc's delicate melodie "Phydilé" in magnificent contrast with his later performance of Mime's aria "Zwangvolle Plage" from Wagner's Siegfried. Accompanying himself with clanging sticks to emulate the sound of the forge, he imbued his character with bitterness and frustration.  What a pleasure to witness such versatility!
Baritone Samson McCrady gave an expansive performance of Figaro's aria from Rossini's Il barbiere di Siviglia. We enjoyed his facility with the rapid patter and his leaps into falsetto for humorous effect. Later we would hear him close the program with "The Impossible Dream" from Leigh's Man of La Mancha, joined by the rest of the singers as chorus.
Countertenor Key'mon Murrah utilized a finely wrought vibrato in his performance of "Ah! quel giorno ognor rammento" from Rossini's Semiramide.  Not everyone loves this fach but we surely do!
Mezzo-soprano Lisa Rogali has a true mezzo sound that was just right for Rosina's aria "Una voce poco fa" from Rossini's Il barbiere di Siviglia. We heard some more than usually interesting embellishments of the vocal line,  all successfully negotiated.
Mezzo Mary Beth Nelson gave a heartfelt performance of "Sein wir wieder gut!" from Strauss' Ariadne auk Naxos, reminding us that opera is a "heilige Kunst".  We enjoyed the expansiveness at the top of her register.
Mezzo Mala Weissberg gave a lighthearted reading of "Nobles seigneurs, salut!" from Meyerbeer's Les Huguenots. Her fine French was particularly lyrical.
From Bellini's I Puritani soprano Kungeun Lee  performed "Qui la voce sua soave...vien diletto". We enjoyed the long phrases, the skips, and a well executed portamento.
No evening is complete without the "Flower Duet" from Delibes' Lakme. Ms. Reiss and Ms. Weissberg performed it in perfect hermony, to our delight.
We don't often hear Wagner in recitals like this so it was a special treat to have 2005 Winner John Dominick III perform Wotan's aria from Das Reingold.  "Abendlich" would have us believe that things would go well for the gods, LOL.  We take it, judging by Mr. Dominick's performance that things are going well for him!
It was a completely satisfying evening and we look forward to the success of this year's award winners
© meche kroop
Posted by meche at 6:25 AM