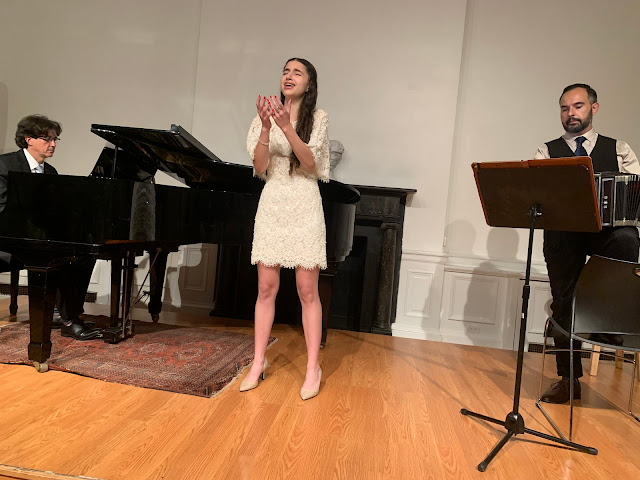 Maestro Jorge Parodi, Mezzo-soprano Morena Galán, and Bandeónista Rodolfo Zanetti
If New Yorkers are ignorant of Argentinian music, we are sure that will not last long since Maestro Jorge Parodi has assumed the helm of Opera Hispánica; he will see to it that these treasures will be mined. The most interesting feature of Latin American music, in our opinion, is that their composers were not seduced by the destructive tendencies of the world of music academia which gave the old heave-ho to melody and key signatures.; Latin American music remained melodic and relatable all through the 20th c. and on into our own epoch.
Last night, hosted by The Consulate General of Argentina in New York, a full house was gifted with a program of Argentinian music, including art song, folkloric song, piano compositions, and, of course, tango. There was no shortage of melody and rhythm, joined in celebration of a wide range of human emotion.
Included among the artists were Maestro Parodi himself, appearing as collaborative pianist, solo pianist Pablo Lavandera, Metropolitan Opera star baritone Fabián Veloz, baritone Gustavo Ahualli, two lovely young mezzo-sopranos Morena Galán and Malena Dayén, guitarist Andrés Guerra, and bandoneónista Rodolfo Zanetti.
The above photo captures an intense moment in which Ms. Galán offered a passionate rendition of a tango from the 1920's entitled "Romance de Barrio" by Anibal Troilo. Aside from possessing an appealing and well-supported instrument, this young artist has a formidable ability to connect with the audience, an ability than can only come from a deep connection with the music. We enjoyed equally Carlos Gardel's "Por una cabeza" which allowed her the opportunity to show off a smoky lower register. The more modern "El clavel del aire blanco" by Carlos Guastavino was also given the same heartfelt treatment.
From the same song cycle, the familiar. "La rosa y el sauce" was beautifully performed by Ms. Dayén whose rich mezzo was put to good use in her phrasing of the gorgeous melody and in the fine use of dynamic variation.  In the livelier dance-like "Pampamapa", also by Guastavino, we had trouble staying still. Splendidly accompanied by Mr. Guerra, she introduced us to Daniel Toro's "Samba para olvidarte". Unfortunately, the audience broke into applause before we could hear the conclusion of Mr. Guerra's tender postlude.
Mr. Veloz' generous textured baritone filled the room with resonance in a stunning rendition of Guastavino's "Cita", making ample use of phrasing and dynamics. The dancy rhythm of Jorge Cafrune's "Cuando llegue el alba" was delightful. He wisely matched his large voice to the size of the room.
Mr. Ahaulli's powerful baritone fit well with Guastavino's "Abismo de sed" which was preceded by a complex introduction in the piano part which was stunningly performed by Maestro Parodi. We also enjoyed Carlos Gardel's familiar "El dia que me quieres" which just oozed romance.
Mr. Lavandera performed Tres Danzas Argentinas Op. 2  by Ginastera, composed early in his life. The rapid fire "Danza del viejo boyero" was followed by the lilting adagio "Danza de la moza donosa" (our favorite), and finally  "Danza del gaucho matrero"  the complex rhythm of which the artist was thoughtful enough to explain to the audience.
He also performed a gentle work by the recently deceased Claudia Montero entitled "Junio", given its New York premiere. He shared with the audience the fact that what sounded like improvisation was written down note by note. The work was marked by. thrilling runs and lilting arpeggi.
There were many more delights in the generous program, including tangos by the famous Astor Piazzolla. One could not fail to appreciate the wide variety found in this program which was entitled An Argentinian Affair. For us it was a golden opportunity to get a taste of many different styles of composition and to hear some new voices.  A big bravissimo to all concerned!
© meche kroop
Posted by meche at 7:15 AM