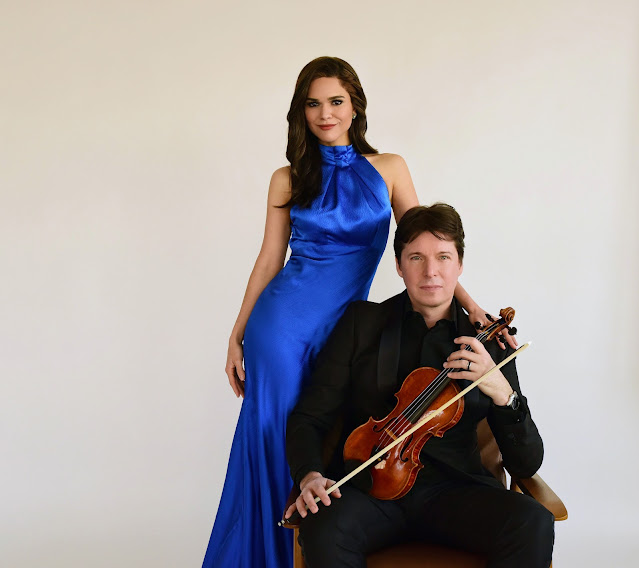 Larisa Martinez and Joshua Bell
(photo by Shervin Lainez)
It is rare to find a concert as well planned and exquisitely performed as last night's "Voice and the Violin" at the Kaufmann Concert Hall of the 92nd St. Y. We were thinking "Divine Duo" for the title of our review but that would have neglected the exceptional collaboration of pianist Peter Dugan, so well remembered from his Juilliard days. Much pandemic labor went into researching works for violin and voice and in adapting works for this combination. This would seem to be a labor of love--love between husband (violinist Joshua Bell) and wife (soprano Larisa Martinez), since this beautiful pair of artists are indeed wed. The pacing of this concert held us spellbound from beginning to end and left us feeling elevated.
The concert opened with a rarely heard work by Mendelssohn entitled Infelice. Musical scholars claim that the work comprises two separate works written in two different periods but both are settings of text by Pietro Metastasio and both were written in the same key. Perhaps this would explain why the audience burst into applause after the recitativo. In any case, it is a lovely concert aria and allowed Mr. Bell and Mr. Dugan to create an entire orchestra to back up Ms. Martinez' astute handling of the two sections, particularly the urgency of the cabaletta. We admired the fineness of the trills and the drawn out diminuendo of the conclusion.
Ernest Bloch's "Nigun" from Baal Shem alternated sorrowful melodies with aspirational ones; forcefulness was met with delicacy in rapid alternation. We know little about violin performance but couldn't help noticing how much like the human voice it is--but also capable of something else that is beyond the reach of the voice, the double stop. Although ignorant of violin technique, we are capable of recognizing and appreciating artistry which Mr. Bell has in spades, as they say.
The eponymous heroine of Massenet's Manon begins her journey as a wide-eyed impressionable convent-bound young woman and Ms. Martinez's acting here was just as exceptional as her vocal artistry. She created a very believable character, so believable that our mind's eye supplied the town square and the coach! There was something else that impressed us. The artist gave a glimmer of the wildness behind the innocence, hinting at what would follow. What a performance!
In Ferdinand Hérold's. "Jours de mon enfance" from Le pré aux clercs, the gorgeous melodies bounced back and forth between violin and soprano, made delicious by the rapport between the two artists. If Mr. Dugan was denied the benefit of eye contact, he never faltered in his support of the other two artists.
Chopin's Nocturne in E-flat Major, Op. 9, No. 2 is one of our favorite works and to hear Mr. Bell play his own arrangement, with Mr. Dugan relegated to a supportive role, was a revelation. It allowed us to hear the piece with fresh ears and to realize the very different colors and capabilities of two different instruments.
Ms. Martínez voice and personality were perfect for the Iberian inflected. "Les filles de Cadix" by Delibes. Her highly spirited performance was countered by dreamy delicacy in her performance of Richard Strauss' "Morgen".
Mr. Bell's performance of Henryk Wieniawski's  Scherzo-Tarantelle, Op. 16 showed off his astonishing technique, driving the audience wild. We might mention here how much we appreciated the unassuming manner in which he addressed the audience, sharing with us that he played this piece as a 12-year-old. The achieved intimacy belied the size of the packed auditorium and we felt as if we were in a salon in our own home.
Our lovely soprano took over with a rapid fire performance of the lively "Zapateado" from Gerónimo Giménez' zarzuela , La Tempranica. Regular readers will recall how enthusiastic we are about zarzuela!
We enjoyed Narciso Figueroa's "Mi Rancho" so much that we were inspired to learn something about him. Ms. Martínez is rightfully proud of her Puerto Rican heritage and what a good choice it was to share a work by her homeland's Father of Danzas, as he is called. The work she sang comes from a set of four songs entitled Cuatro Decímas and we want to hear the other three!  Mr. Figueroa was born to a Puerto Rican dynasty of musicians, studied classical composition in Europe and returned home to Puerto Rica to apply what he learned to his country's folkloric musical traditions and to assume a position as professor and director of the piano department of the Conservatory of Music of Puerto Rico, a position which he held for many years.
The evening ended with West Side Story Suite, an arrangement of Leonard Bernstein's opera by Brohn and Czarnecki. The violin introduction sounded uncomfortably dissonant to our ears but once Ms. Martínez started to sing (both female parts) we grew to love it. We were ready to leave on a "high" but our vivacious soprano took us even higher with a work well suited to her beauty--"Quando m'en vo" from Puccini's La Bohême, bringing the audience to its collective feet once more.
We understand that this divine program will be touring the United States, so if you are living outside New York, watch out for it.
© meche kroop
Posted by meche at 7:10 AM