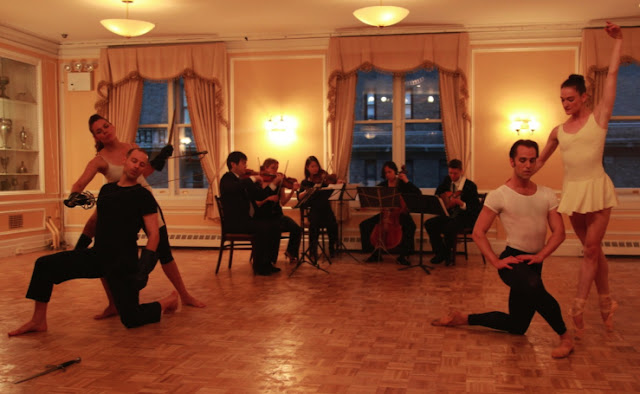 Salon/Sanctuary concerts never disappoint; they offer their entertainment with a generous serving of illumination.  Monday night's event entitled "On Point" was a case in point.  Several interesting points were made about the common origins of sword fighting and ballet dancing, the latter one of our favorite art forms, the former a revelation.  You take some of the stances and lunges of sword fighting and meld them with 17th c. court dance and--voila!--the birth of ballet.

Stage Director and Fight Choreographer Erica Gould, sister of Founder and Artistic Director Jessica Gould, made sure that the audience left with a clear picture of how this evolved.  In an exemplary show of scholarship, engravings from the 17th c. were studied to replicate the stances of sword fighting, illustrated by sword fighters Jacqueline Ann Holloway and Robert Westley.  Analogous ballet moves were illustrated by two ballet dancers from New York City Ballet--the lovely long-limbed Megan LeCrone, partnered to perfection by Jared Angle.  The two pairs danced side by side and comparisons were easily made.

The music chosen was likewise from the 17th c. and was played with grace and gusto by members of The Sebastians Chamber Orchestra.  The first half of the program comprised works by Johann Heinrich Schmelzer, G. F. Händel and Antonio Vivaldi.  In Schmelzer's Balletto for Strings and Continuo in G, the string quartet (Daniel S. Lee and Beth Wenstrom on violins, Katie Hyun on viola, and Hannah Collins on cello) played with clarity, augmented by Charlie Weaver on the baroque guitar playing the continuo part.  The name of this piece is "Die Fechtschule" (the fencing school); the alternation of spirited and frisky allegro sections and stately lyrical adagio sections provided a great deal of variety.

The most interesting part of the Händel Sonata in B-flat  was Mr. Weaver's playing of the theorbo, as long in neck as a giraffe.  Vivaldi's Trio Sonata in D minor "La Follia" opened in waltz time with a mournful melody that gave way to no small degree of frenzy with lots of syncopation and challenging embellishments.

But it was the second part of the program described above which captured our imagination.  The dancing and sword-fighting were performed to Heinrich Ignaz Franz von Biber's Battalia a 10 in D major, a radical piece of writing with harmonies way ahead of their time.  At one point, different meters and keys were played simultaneously, a challenging task for the musicians who rose to the occasion.  It was here that we observed the intense eye contact between both members of each couple and the compelling mirroring between the two couples.

The effectiveness of the illumination was our subsequent ability to watch ballet and see many of the moves in a new light. May we propose a good look at Maria Kowroski dancing "Red Angels" on Youtube?  Much gratitude was felt to Salon/Sanctuary for this new insight.