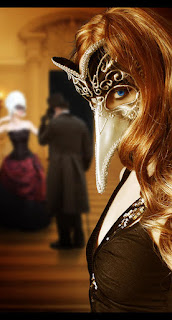 Rebecca Greenstein, Executive Director of Opera Moderne, wears many hats and last night, as hostess of The Bohemian Bash, she also wore so many costumes that we lost count.  If you have never met this amazing lady, allow us to introduce her.  She hails from Texas and has degrees in music and vocal performance.  She sings and dances and emcees just for starters, and does them all with special flair.

Last night she put together a fund-raiser in honor of Andreas Stadler, Director of the Austrian Cultural Forum New York, where we have heard and reviewed some pretty impressive lieder recitals (one coming up next Tuesday, don't say we didn't alert you).  Ms. Greenstein does nothing by halves; the evening had such a variety of entertainment that no one could have left unsatisfied.

The champagne flowed and was heralded by Verdi's "Libiamo" from La Traviata.  If that was too serious for you (LOL) there were excerpts from Johann Strauss' Die Fledermaus.  Attendees were given the opportunity to bid on arias and duets of their choice; if you figured out that Ms. Greenstein was tapped to sing "O mio babbino caro" from Puccini's Gianni Schicchi you were right on the money.  Much of the accompanying was performed by Pacien Mazzagatti.

Should you prefer the terpsichorean arts to opera, you would have enjoyed the world premiere of New Chamber Ballet's choreographer Miro Magloire (who cut quite a rug himself at the after-party); entitled "Metamorphose", the piece was danced by Kristin Draucker accompanied by Emily DiAngelo on oboe.  If folk dancing were more your taste, there was some lively Czardas and a performance of "Vilia".  Ballroom dancing?  You probably loved the five couples waltzing to "The Blue Danube".  Tappers?  Oh yes, that too.  Just look at Sugar Foot Mafia Dance Company.  And just look at those Hot Box Girls!  Wait, there's Ms. Greenstein again!

New music and classical, it was all there like a bounteous buffet, from Mozart to Berio.  And jazz too!  Franz Hackl Jazz Quartet made quite an impression.  And burlesque!  Right down to the pasties.  Did we forget anything?  Oh yes, dancing at the after party--Jessie Bunting and the Hot Shim Sham Orchestra.  Six solid hours of fun at the Czech Center.  We wish we had space to mention all the talented folk who contributed to this amazing evening of entertainment.  We just want to know who lit the fire under Ms. Greenstein.  And if that sounds like the title of a song, she's probably writing it by now.