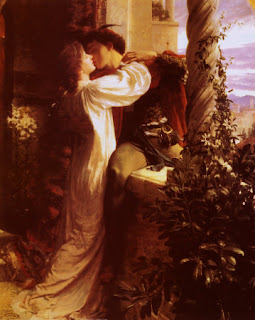 Is it sacrilege to say that Sir Kenneth MacMillan's ballet tells the story of Romeo and Juliet as eloquently as Shakespeare's verse?  It is more difficult to find mature and gifted actors who can act and sound like teenagers than it is to find ballet dancers who can convince us.  There is not a wasted scene in this 1965 three-act ballet created for the Royal Ballet in 1965 and introduced to American Ballet Theatre two decades later.

The sets and costumes by Nicholas Georgiadis recreate the world of Renaissance Verona in a most believable fashion, in spite of the absence of the Arena of our memory.  Everything evokes a Renaissance painting with burnt sienna, burnt umber and ochre being the main colors.  As regular readers will have noticed, we adore verisimilitude.  We felt transported to another time and place, much as we did at the Metropolitan Opera's magnificent production of Wagner's Die Meistersinger.

Prokofiev's score comprises set pieces for each scene, moving from lyrical adagios for the romantic duets to lively allegro music for the street scenes with an ominous foreboding theme to illuminate the strands of the tragedy.  Charles Barker did an exemplary job of conducting.  The woodwinds were particularly remarkable.

The ABT dancers did a superlative job of assuming the attitudes of the citizens of Verona.  There were aristocrats with their arrogance and their finery, members of a wedding party, some pretty randy "painted ladies", a crippled beggar, and some regular townfolk reacting to the events in the plaza.  In spite of the categories, each member of the corp seemed to have his/her own distinguishable personality.  This Verona is not a happy place.  Gangs of young men are too quick to draw their swords and the death rate soars.  Likewise the women of the town scorn the "painted ladies" who retaliate with their own provocation.   It is well to remember that such realismo was new in 1965.  Sir Kenneth is said to have been inspired by John Cranko's choreography of R&J but he was no copycat.

As Juliet, Diana Vishneva created a headstrong adolescent still playing with dolls in Act I but maturing considerably by the end of the ballet.  Not only was she at the peak of her form-- dazzling with her footwork, elegant with her port de bras-- but also most persuasive with her acting.  Her supple spine lent great pathos to her death pose and equally great vulnerability to the lifts.

Marcelo Gomes overcame his manly handsomeness with enough acting skill to convince us that he was a teenager in the throes of first love, as he switched his attention from Rosaline to Juliet.  His dancing has always been remarkable in terms of technique, partnering skills and musicality; his acting skills have grown enormously.  His chemistry with Ms. Vishneva was unmistakeable.

We could easily say that the saddest scene we have seen all year was Romeo trying to dance with a deathly limp Juliet.  The only thing that would be more heart-breaking would be if ABT decided to "modernize" this perfectly perfect production.