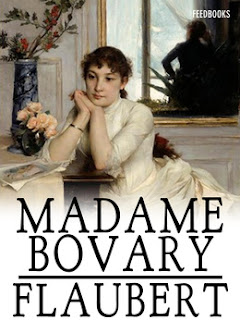 We are continuing our exploration of the American musical and trying to decide if this popular art form is the contemporary equivalent of 19th c. opera--popular entertainment in the language of the country of origin.  Paul Dick has adapted the novel by Gustave Flaubert and written the music and the lyrics; it is being presented UNAMPLIFIED in a black box theater at the Roy Arias space.  It was entertaining.

Does anyone not know the story of the romantically inclined young woman living in provincial France in the late 19th c.?  To a 21st c. woman, it is difficult to imagine her counterpart in that epoch without options.  There was no life for a woman without marriage and our heroine marries a country doctor who comes to tend to her father.  She rapidly succumbs to the tedium of being a wife without ever learning what it means to be a woman or even a person.  She descends into orgies of "shopping therapy" and a couple tawdry affairs and finally, deeply in debt, she kills herself with arsenic.  Sad story.

Mr. Dick has hewn fairly close to the book and has retained the original time period but has modernized much of the dialogue, making it familiar to contemporary ears but paying the price of loss of authenticity.  His music is tuneful and accessible; it was excellently played by Music Director Rebecca Greenstein and an orchestra was never missed.  The lyrics scanned and rhymed and were often clever, as in "I Insist!" or just plan lovely, as in "Rain on the River" in which the listener could hear the rain falling.

Direction and choreography were by Marlene Thorn Taber who kept the story moving along.  The minimal set design--a bed, a table, some chairs and an authentic appearing pharmacist's corner--were by Aaron Sheckler.  Period appropriate costuming was by Roejendra Adams.

The performances were of variable quality.  The weight of the show was carried well by petite soprano Hayley Hoffmeister as Emma Bovary; her acting was as good as her singing.  To her credit, she was able to arouse empathy for this unfortunate heroine.  Her boring but devoted husband was played by Roger Rathburn whose speaking voice was beautifully resonant but whose singing voice seemed frayed; we wondered whether he was meant to appear the age of her grandfather and felt that this casting choice added another dimension to Emma's unhappiness, one which was not in the novel.

As Rodolphe, Eyal Sherf was appropriately slimy as he plotted in advance how to seduce and abandon Emma; the audience's laughter seemed a bit inappropriate but, then again, that was written into the libretto and was never emphasized in the book.  More laughter, also deliberate, was provided by Christopher G. Teft who made the most of his role as Homais who manipulates Emma into buying things and then throws her into bankruptcy.

Leon was played by Patrick Thomas Spencer who did not convince.  In the ensemble were John Raymond Barker, Alison Novelli, Mia Rose Spackman and Carl G. Zurhorst.

It was a fine way to end the holiday weekend and we will be looking for more musicals by Mr. Dick who seems to have already written quite a number of them.