A SWEETHEART OF A SHOW 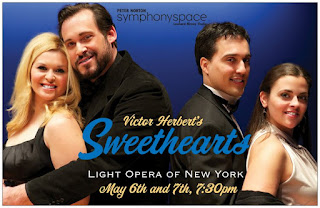 We confess to having been ignorant of the glories of operetta until recently; now we cannot get enough.  Victor Herbert's Sweethearts, while never one of his more famous ones, is chock full of delights to the eye and ear.  Light Opera of New York gave this charming work a fine production, using a revised libretto by Alyce Mott and the late Dino Anagnost.

The silly but enormously entertaining story concerns a royal infant put into the arms (well, into the tulip patch) of the worthy Dame Paula (Vira Slywotsky) who runs a laundry in Bruges under the name of Mother Goose with her daughters whom she calls "goslings".  The child's birth country has survived a revolution and is now calling for the return of the monarchy.  Will the child, now a beautiful young woman, be discovered and returned to the throne or will the handsome prince (Peter Kendall Clark) be crowned instead?  Well it all works out in the end in spite of the machinations of the spiteful Liane (Stefanie Izzo) , the scheming playboy Lieutenant Karl (Eapen Leubner), the rascal Mikelovsky (Victor Khodadad) and other assorted fortune hunters.

The action is narrated by Dame Paula and Ms. Slywotsky was as effective dramatically as she was vocally.  The two romantic female leads were equally fine although we thought Ms. Xanthopoulu might have played her part with a bit more innocence to contrast with the worldly wise nastiness of Ms. Izzo.  Mr. Kendall Clark made a fine princely male lead with a fine resonant voice and Mr. Leubner was appropriately cast as a military man.  There was not a vocal weak link.

Director Gary Slavin did a commendable job making sense of this screwy story and moving people around a small stage with no scenery to speak of.  Wisely, the work was presented "straight" and with consummate respect; there was not a whiff of condescension.  Costumes by Stefanie Genda were colorful and well suited to the time (beginning of the 20th c.) and place.

Mr. Herbert's frothy music, under the direction of Conductor Michael Thomas was glorious.  The tunes are delightfully melodic, many of them in waltz-time.  We heard echoes of Gilbert and Sullivan and even a song that foreshadowed Sondheim.The small orchestra comprised Jeremiah Oliver at the piano with violin, cello, bass and flute making valuable contributions to the texture; notable was the variety of percussion effects played on a variety of instruments.

LOONY is a perfect example of a small company that does much with limited resources.  There was nothing about the production to suggest economy; we don't know how they did it but they did it.  We will be sure to augment next year's opera-going with some operetta-going!