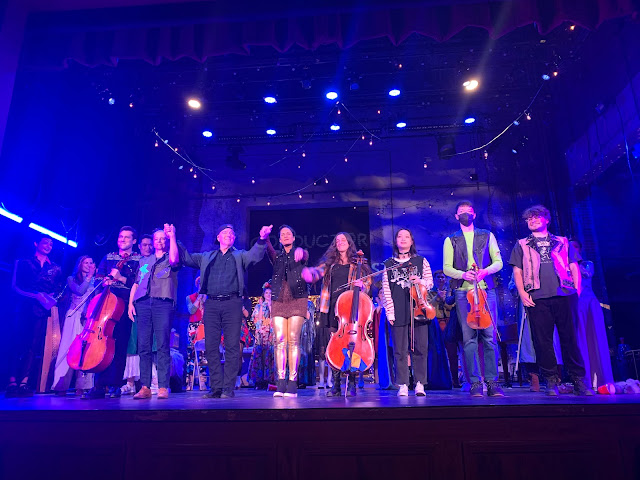 Curtain Call from La Calisto presented by Mannes Opera
Last night we attended a performance of Francesco Cavalli's l651 opera La Calisto, presented by Mannes Opera and directed most imaginatively by Emma Griffin. We don't know why all three opera conservatories in New York City chose to present a Baroque opera during the same time period; we thought we had had our fill and had no intention of writing another review. We only went to see the performance of a couple singers we admire. However, we were so taken with the production and the artistry of the singers and musicians that we feel compelled to share it with you, dear reader. If you read this too late to see it in person, we urge you to watch the livestream on December 2.
We were amazed by the endurance of so many aspects of love that have remained unchanged for  four centuries. The stage was filled with nymphs and satyrs, gods and goddesses--strange figures to be sure; and yet their concerns are our concerns today.  The social media generation did not invent unfulfilled romantic longing, sexual dalliances overcoming chaste intentions, rejection, cross-dressing, lesbian love, romantic deception, cheating husbands, nor vengeful wives. There was something particularly thrilling about seeing ourselves onstage in a work dating back four centuries.  Not just thrilling but moving as well. Love and sex will always be with us until the robots take over!
It is difficult to believe that this marvelous work lay dormant until 1970.  How fortunate we are that it was discovered and revived.  It lets us in on what the mid 17th c. Venetians expected from a rather new and popular art form. Cavalli was there at the birth of opera!
Impresario/librettist Giovanni Faustini had created many operas with Cavalli; this one was their penultimate production. The story was derived from Ovid's Metamorphosis and recounts the myth of Giove pretending to be the goddess Diana in order to seduce the beautiful chaste Calisto. The tale is padded out with the love story between the real Diana and the shepherd Endimione. In every case, chastity falls under the weight of sexual desire.
The wily Mercurio (fine and funny tenor Daniel Rosenberg) convinces Giove (authoritative baritone Christopher Lau) that persuasion is no match for deception when trying to seduce a woman. Their duet was musically gorgeous and also quite humorous.
In the title role, lovely soprano Anna Aistova sang about wanting to lead a chaste life, devoted to the goddess Diana.  Giove transforms himself into Diana (beautifully sung by soprano Lindsey Kanaga) and successfully seduces her. The two women had a tender duet before entering a cave to exchange chaste kisses (which led to much more).
When the real Diana appears (Jihye Seo) her voice and gestures are very different and there is no doubt that she is the real thing. When Calisto refers to their makeout session, Diana is outraged by the inference and tosses Calisto out of the virginal sisterhood.
Diana, on her part, is secretly in love with the shepherd Endimione (Elisse Albian) who expresses his longing for her in the most exquisite aria.
In a scene offering comic relief, Maia Sumanaweera portrayed Linfea, one of Diana's followers, who longs for romance. In spite of her desperation, there is no way Linfea is going to settle for the importuning of Satirino (Emmet Solomon), even though he tells her that while young, his tail is still growing!  He is a member of a clutch of satyrs, of which the leader is the god Pane, portrayed by Joohyun Kim. As Silvano, one of the satyrs, we enjoyed hearing Yuan Lai.
We were met with new delights as Giunone, the jealous wife of Giove, appeared to expose her husband's infidelity.  The stunning soprano Marieke de Koker just about stole the show as she gave her all to the revenge aria, in which she instructs women not to put up with philandering husbands but rather to take revenge.  Her particular revenge is to transform Calisto into a bear. Giove cannot undo this curse but finds his beloved Calisto a place in the firmament as the constellation Ursa Major, a condition foretold in the Prologue.
The Prologue was outstanding with soprano Yixuan Li taking the role of L'Eternita, soprano Jillian Agona appearing as Il Destino, and mezzo-soprano Morena Galan taking the role of La Natura. In a stunning opening scene the three women decide that Calisto deserves her place in the heavens.
Taking the roles of The Furies were Olivia Gray and Anna Ruhland.
Emma Griffin, Managing Artistic Director of Mannes Opera, pulled exemplary performances from these gifted young singers and told the tale in a way that resonated with contemporary listeners, without robbing the work of its authenticity. Cavalli's music is very singable and  a small chamber orchestra, such as was heard in its own time, did full justice to Cavalli's writing, led by the rising star conductor Kamna Gupta.
We do not know who was responsible for the costuming and makeup but both contributed enormously to the effectiveness of the storytelling. What impressed us the most was how these wonderful singers are also terrific actors, especially in the comic roles.  We could see both the mythic characters and ourselves simultaneously!
© meche kroop
Posted by meche at 8:14 AM