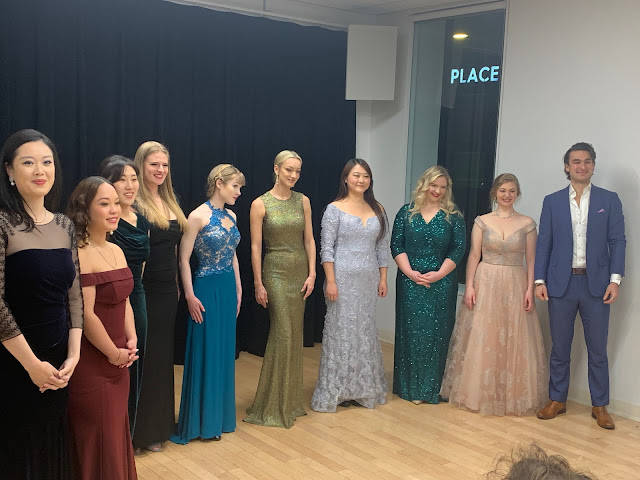 It's always an exciting event when the finals of a competition are open. We were delighted to have been invited to The Century Opera Voice Competition to hear ten fine young singers. The singers each led off with an aria of their own choosing; then the judges requested another aria from their lists of prepared arias, presumably to learn something new about the singer, perhaps facility in a different style or different language. We enjoyed this rounding out of the picture.

We do not envy the judges since each young singer offered something valuable. And so, we will not tell you, dear Reader, who won the prizes because they were, in our eyes (and ears) all winners! We will tell about the young artists in the order in which they appeared.

First on the program was soprano Rose Kearin who did justice to "Ach, ich liebte" from Mozart's Die Entführung aus dem Serail, sung in good crisp German.  We regretted missing Adelaide's Aria from Jonathan Dove's The Enchanted Pig, since we had never heard it before and might never have another opportunity.

We hadn't heard enough of soprano Caroline Corrales at the Santa Fe Opera when she sang Donna Elvira (in a nun's habit) so we were especially delighted to get a better "listen". Her sizable sound was perfect for Verdi and "Ernani, Ernani involami" was thrilling. Ms. Corrales is an emotional singer and Jenufa's prayer from the Janáček opera of the same name was stirring. We cannot comment on the language because we are completely ignorant of Czech.

"Stridono lassù" from Leoncavallo's  Pagliacci is one of our favorite verismo arias and soprano Manli Deng created a lovely sound world including a delicate trilll. Massenet's Le Cid, however, is not well known by us, but Ms. Deng evinced some fine sounding French in "Pleurez, mes yeux". Her use of dynamics were effective in eliciting emotion.

"Chi il bel sogno di Doretta" from Puccini's La Rondine was a much better choice for soprano Jingjing Qi than "Sleeping Beauty" from Menotti's The Hero. It is difficult enough for native English speakers to sing musically in English! However, there was a heart-stopping decrescendo that tickled the ear.

Soprano Hyunju Ha invested "Ah, non credea mirarti" from Bellini's La Sonnambula with dynamic variety, fine fioritura, and an affecting vibrato. In the exposed passage without piano accompaniment we could appreciate the musicality of her phrasing. Although her second selection was not listed on the program, the choice of Sophie's "Rose Aria" from Der Rosenkavalier came as a delightful surprise, sung with wide-eyed innocence in fine German. They were good choices because they demonstrated her versatility.

Tenor Samuel White was the lone male on the program and he showed his stuff in the "Flower Aria" from Bizet's Carmen and an intense delivery of "Una parola sola..Or son sei mesi",  Ramerrez' aria from Act II of Puccini's Fanciulla del West. Mr. White has a powerful voice and we longed to hear some tenderness in places.

We would like to hear soprano Elizveta Ulakhovich on another occasion. There is a lot o beauty of tone there but her choices did not seem suitable to us. Micaela's "Je dis que rien ne m'épouvant" from Bizet's Carmen requires a singer who can sound like an innocent country girl pushed to the limits of her fearfulness, a sense of "whistling in the dark". It wasn't there. Ms. Ulakhovich projects an air of confident glamor and we could think of far better material for her to sing.

Mezzo-soprano Madison Marie McIntosh, on the other hand, knows exactly where her strengths lay and how to play to them. She has a voice of unusual and exciting timbre with great flexibility in fioritura. "O mio Fernando" from Donizetti's La favorita is the perfect vehicle to show off her finely honed bel canto technique. The judges requested "Un'altra volta ancor" from Händel's Partenope which was just as splendidly performed; however, we would have much preferred to hear Waltraute's aria "Höre mir Sinn was ich dir sage" from Wagner's Götterdammerung. We hope we will have another opportunity.

Finally, soprano Yohji Daquio did get the opportunity to show off her versatility by performing two very different characters, the sprightly Marie from Donizetti's La fille du regiment showing her patriotism in "Salut a la France" with all its fabulous fioritura--and then meeting head on "I am the Wife of Mao Tse-Tung" from Adams' Nixon in China. This aria involves a lot of rage and repetition and it takes a gifted singer to make it interesting. She succeeded. We were floored.