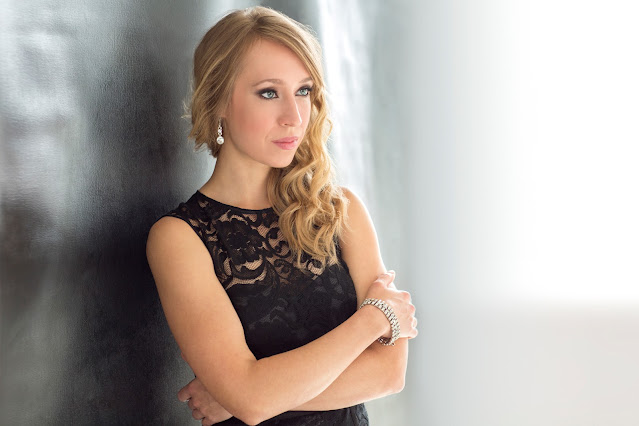 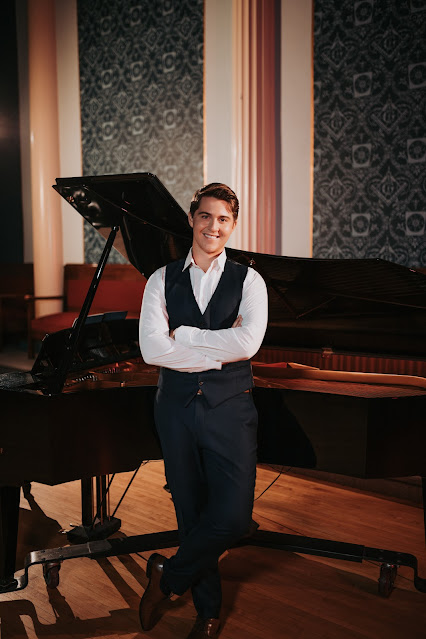 JACK SWANSON (Photo by Lily Lancaster)
Two of our favorite young artists presented a most satisfying vocal recital last Sunday. Thanks to Performance Santa Fe, singers from the Santa Fe Opera get an opportunity to perform art songs in an intimate environment, the charmingly decorated theater at the Scottish Rite Temple.
Soprano Emily Fons and tenor Jack Swanson have been on our radar for some time and we are looking forward to seeing them perform in Il barbiere di Siviglia at the Santa Fe Opera--and you should too. It is one of our favorite operas and always a good time, especially when cast with exciting young talent. These two artists have perfect voices for bel canto.
The highlight of Sunday's program, for us anyway, was the final selection on the program, one from a different Rossini opera--Cenerentola. The two artists had excellent chemistry in the scene in which the Prince, in disguise, first meets our charming heroine. The scene opened with Mr. Swanson walking up and down the aisles, representing his search for a potential bride. We could not imagine a better depiction of love at first sight. The elaborate bel canto filigrees presented no challenge to these two remarkably flexible voices.  We were enchanted.
Now, what about the rest of the program! Ms. Fons led off with three songs by Charles Ives, of whom we have never been much of a fan. Surprise! The songs he wrote to German text were a revelation. We always love being introduced to something we never knew existed and these songs have many of the qualities we love in Schubert's canon. But of course the fine German texts that inspired Schubert could also inspire Ives to write gorgeous vocal lines. The piano parts were also notable with lyrical arpeggi in "Feldeinsamkeit" and some thrilling rolling chords in "Weil auf mir". We loved the way Ms. Fons colored her tone with gentle warmth.
Also new to us were some settings of Shakespearean text by Erich Korngold. The songs fit Ms. Fons' lovely soprano perfectly and we appreciated the clarity of her diction--a quality we never take for granted.  In "Come Away Death" there were unsettling shifts from minor to major. "Adieu Good Man Devil" gave her the opportunity to use facial expression and gesture to get the song across, and that is just what we look for in a vocal recital. Lacking costuming and scenery, the singer and pianist must tell the tale.
Ms. Fons' storytelling skills also illuminated a set of songs by Francis Poulenc. These miniature marvels also offer the artist a variety of moods to convey and she certainly did live up to the task. We loved the sweet humor of "Le carafon" and the delicacy of "Les anger musiciens". The decrescendo at the conclusion of "La reine du coeur" was exquisite. Her diction in French is just as fine as it is in English.
Alternating between these sets were those of the terrific tenor Jack Swanson. He also performed songs by Poulenc and gave a great interpretation of the ironic "C" with the support of Mr. Tweten's searching piano line. He used his instrument well and expressively; there were some lovely floated notes at the top of the register. His French was as fine as one would wish. We especially enjoyed his vocal agility in "Fêtes galantes", which was overflowing with personality and a true crowd pleaser.
We were very happy to see one of our very favorite Rossini songs on the program, one that we were introduced to by Pavarotti. "La promessa" is a simple song that goes deep, whether due to, or in spite of an uncomplicated melody, one which we have not been able to get out of our head since the concert. Of course, no one is, or ever will be Pavarotti--but Mr. Swanson did a creditable job. "Addio ai Viennesi" was new to us and must have an interesting story behind it. It suited his voice well and showed off his flexibility, although we thought the scale passages might have benefitted from a bit more articulation.
Franz Liszt's Tre sonetti di Petrarcha was an interesting choice for a bel canto voice and was only partially successful. There is power enough in the voice but pehaps insufficient variety of color. The poet is in torment in "Pace non trovo" and Mr. Swanson expressed that in spades, successfully negotiating the wide leaps. However, "Benedetto sia il giorno" requires a more tender color. In "I vidi in terra angelici costumi" the voice is placed in the lower register whilst the piano occupies the higher register. This was also well handled. We know Mr. Swanson can float his high notes and there were times in this cycle when we wished he wouldn't push for volume. Sometimes whispers speak louder than shouts!
Once again we were very engaged by the contributions of collaborative pianist Robert Tweten. It was not solely in the places in which the singer was silent that we noticed qualities of the music that had gone previously unnoticed. It was more the interplay between voice and piano that captivated us.
© meche kroop
Posted by meche at 6:53 AM