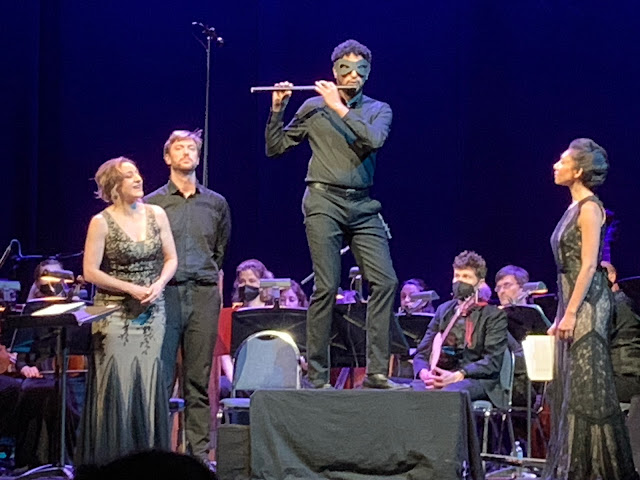 Sichel Claverie, Victor Sicard, Jehú Otero, and Samantha Louis-Jean
It is no small matter to come to enjoy that which one previously avoided. Like kale. Baroque music has generally sounded to us like a sewing machine going on and on, lacking in climax and resolution. Thus we were thrilled to be so royally entertained by Opera Lafayette's program last night--Concert Spiritual aux Caraïbes. We found this "Religious Music in the French Caribbean 1760-1790" to be absorbing, entertaining, and thoroughly delightful.
We are not sure how "spiritual" can be defined. The program began and ended with the 1716 Messe en cantiques by Domenico Zippoli,  performed by soprano Samantha Louis-Jean, mezzo-soprano Sichel Claverie, tenor Jehú Otero, baritone Victor Sicard, and bass Jonathan Woody, accompanied by a pair of violins, cello,  and theorbo. We found the weaving of vocal lines and instrumental lines to be exquisite and replete with pleasing harmonies Listening and not reading the program produced feelings of absorption, peace, and aspiration, similar to what we felt during Faure's Requiem and Verdi's Requiem. If religious observance produces such elevated feelings in its believers, we are all for it. Yet, it puzzles us.
Bookended by this Messe was a succession of works by various 18th c. composers both known to us (Pergolesi) and unknown. There were two that we wanted to hear more of: Johann Paul Aegidius Martini, whose opera Le marriage yielded some most enjoyable excerpts, and Duni, whose opera La fée Urgèle seemed to be a comedy about a statue much loved by women that comes to life. This was given a semi staged performance by the four glorious voices of Ms. Claverie, Mr. Sicard (heard two days ago as a farmer in Grétry's Silvain), Ms. Louis-Jean (as his about-to-be-married daughter in the same opera), and Mr. Otero (as her intended, also in Silvain). In this charming scene he portrayed the statue which came to life.
The program was conceived and conducted by Maestro Pedro Memelsdorff whose conducting style was marked by precision and lively gestures, qualities we truly admire and take pleasure in watching. As constructed, the program worked extremely well. There were no pauses for applause and one work led seamlessly to another. This was a wise decision since applause would have interrupted the mood.
All the works were written in the 18th c. but seemed to our ears to owe more to the Baroque period that the Classical. We love the sound of instruments used in "Early Music", particularly the theorbo, the playing of which is fascinating to observe. There were major contributions from the harp, performed by Sandrine Chatron and some dazzling work by Concert Master Théotime Langlois de Swarte. The sweetest sounds came from Charles Brink's baroque flute. The entire orchestra responded to Mo. Memelsdorff's lively conducting. We loved the surprising percussion effects, mainly chimes and snare drum.
It mattered not a bit to us that movements from different works were interspersed. Obviously, the intention was to produce seamless enjoyment and total auditory immersion.  This goal was achieved.  We left with joy and gratitude in our heart, and perhaps that is what is meant by spiritual!
Let us also praise the scholarship of the essays in the program book which we read after the performance. It is interesting to note that the unfortunate and impoverished island known today as Haiti was once the French colony Saint-
Domingue where African slaves were exploited by French planters. Apparently these planters loved culture and theater going was a popular pastime.  This was interesting reading but, unlike one's understanding of Silvain two nights earlier,  not necessary to appreciate the music.
We are already anticipating next year's visit by Opera Lafayette, exploring "The
Era of Madame de Pompadour" which will include ballet as well as opera and chamber music.
© meche kroop
Posted by meche at 6:26 AM