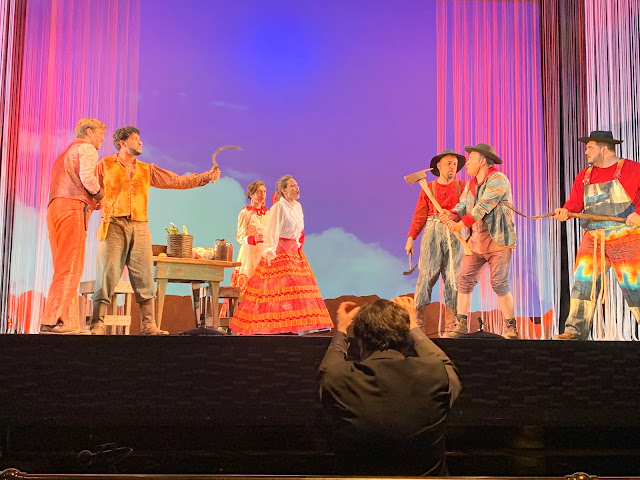 Maestro Ryan Brown conducting Grétry's Silvain
We have missed Opera Lafayette's annual visit to New York and were delighted to welcome them back. It's always an event to see operas from a neglected period of operatic history that we may never have an opportunity to see again. This year's visit was the first of a three-season exploration of French music of the 18th c.  Each season's festival explores music centering around a famous woman in French history.  This year's festival centers around Marie-Antoinette, and so we are given an opera that she enjoyed during France's period of admiration for the pastorale.
The scholarship involved in this festival seems thorough with examination of history, politics, social movements, and culture of that epoch. Probably, those who were able to attend the pre-performance lecture or to read the program book's 100 pages, had a very different experience than we did.
We are the type of person who learns by reading. For us, opera is entertainment. We entered the lovely theater of the Museo del Barrio completely unprepared and naive. It is our opinion that a work of art should stand on its own merits and not require explanation. It was only upon returning home and reading some of those 100 pages that we realized what director Tania Hernández Velasco was going for and what point she was trying to make.  We will discuss that after we discuss the music, which is why we go to the opera instead of reading a book.
The young Belgian composer André-Ernest-Modeste Grétry who had studied in Rome, composed Silvain in 1770 and it premiered at the Comédie-Italienne. It was the first opera performed in New Orleans in 1796. The music is lush and Maestro Ryan Brown (who is also Artistic Director of Lafayette Opera) elicited every nuance from the score. The cast was uniformly excellent with three notable sopranos lighting up the stage. Camille Ortiz, looking way to young to be the mother of a marriageable daughter, used excellent acting skills to overcome her youthful appearance. One of the highlights of the performance was her scena in which she expresses self doubts and ultimately courageous resolve.
Paulina, the daughter about to get married was convincingly portrayed by Samantha Louis-Jean and the role of the enchanting little sister was excellently performed by Teresa Castillo. That the three women with the same vocal range were able to achieve musical harmony as well as familial harmony was impressive.
The male singers were no less excellent. Tenor Jehú Otero has a lovely warm tone and was convincing as the prospective husband of Paulina and baritone Victor Sicard did well with the role of the paterfamilias who was threatened by a new landowner with the loss of his hunting privileges. In the role of the father from whom he is estranged we heard bass Nathan Berg who employed his resonant instrument in the final scene to restore order and harmony to a distressed family. His trio with his two newly discovered granddaughters was emotionally touching.
But perhaps the most compelling moment of the opera was the intricately composed septet  pitting the family against a trio of thugs threatening with pitchforks (a pitched battle?). Here Mo. Brown distinguished himself by making each line distinct with all woven expertly together.
Musically, it was a most worthwhile 90 minutes in spite of a rather prosaic libretto by Jean-François Marmontel. The spoken dialogue was delivered in English and Spanish which puzzled us, since we were ignorant that the directorial decision had been made to change the century and the location! We were also puzzled by the colorful costumes (Patricia Michaels) which didn't look at all the way we imagined pre-Revolution France to look like.
Apparently we weren't the only puzzled audience members. The lively post performance conversations in the Ladies Room speculated without resolution. It was only after reading a lot of information in the program book that we found the solution to the puzzle. The director was drawing a parallel between the pre-revolutionary feudal agrarian system in France with the situation in 19th c. Colorado in the United States where the director's family had lost land. We consider ourselves newly educated since we never knew that French aristocrats owned land in the American Southwest. We do know that the Mexican people threw out the French in the 1860's.  (Think Cinco de Mayo and the battle of Puebla.)
We have been reviewing Santa Fe Opera for many years and have been aware of the strong Hispanic presence from Santa Fe north to Taos (where, incidentally, or maybe not, is located the Helene Wurlitzer Foundation at which Opera Lafayette was in residence to create this festival)! Perhaps the Hispanic natives of that region also had problems with land use. Perhaps there were similar issues with aristocratic sons falling in love with Hispanic peasant women and getting disowned by their fathers, which was the backstory of Silvain. Well, there is reconciliation at the end with acknowledgement that rustic virtue is more important than noble birth. A happy ending.
Even with this new understanding of the resonance between the need for land reform in pre-revolutionary France and the American Southwest, we still would have preferred seeing the piece the way it was written. To us it appeared that the work was forced into a Procrustean Bed.
A further quibble would be the overuse of video projections. They seemed fine during the overture, to set the stage as a rural environment, but later they became annoying as they distracted from the music. At one point we saw confusing loops of strings and fingers, only to learn it was a woman's hands doing embroidery. Like food fads (kiwis, sun-dried tomatoes, and avocado toast) we hope this trend will pass.
© meche kroop
Posted by meche at 7:05 AM