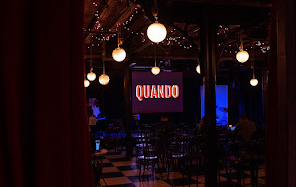 We have reviewed Heartbeat Opera's productions from its inception. We have often written "Our heart beats for Heartbeat Opera".  We have rushed home from their productions bursting with energy, eager to share their prodigious creativity with our readers.  Last night our heart went into arrhythmia; had Quando lasted another moment, we might have had a heart attack. In any case we are heartbroken.

We always like to begin our reviews with something we enjoyed about a production. The only positive thing about last night was the venue.  It is always fun to visit the McKittrick Hotel; the fellow who took us up in the elevator was pleasant.

There were, of course, note for the press. We generally don't read these, preferring instead to meet a work face on.  Either we "get" it or we don't. Well, dear reader, we did not. We were reminded of that species of "performance art" that is neither here nor there, but something existing in the self-absorbed mind(s) of the so-called creator(s). We decline to name the participants in this worthless production. They are probably filled with joy over the sold-out nature of the performances and we do not wish to rain abuse on their parade.

The performance began with a short film that made little sense, if any.  A  couple is sauntering down a dark street dressed in evening clothes. He thinks she is mysterious because she won't tell him her last name. They come close to an argument about protesting. She doesn't like his wealthy friends.  He tells her they are not friends, they just have "deep pockets".

Suddenly he urges her to pick up the pace. She dawdles spitefully, listening to a street performer playing a saxophone. He leaves her there.

A butler dressed in white is handing out white costumes to some people in their undies. One is wearing "tighty whities".  There seems to be some sort of protest with people carrying signs. There is an orgiastic quality.

The aforementioned woman arrives.  She and the aforementioned man sing some operatic arias, including a love duet from Verdi's La Traviata.  At this point, dear reader, we thought the idea was to expose members of the mostly young audience to opera, in which case the poor sound design did nothing to achieve the goal and did a disservice to the highly regarded singers who shall remain nameless. The woman appears to stab the man with what looks like a cello bow.  He bleeds from the mouth. The "protesters" were horrified. So were we.

There was a 5 minute intermission during which we went to the ladies rest room to eavesdrop. Young women were gossiping about their lives and no one said a word about the performance. We asked the young man sitting next to me what he thought.  "It's OK", was all he was willing to share.

The performance resumed.  The women on the other side of me resumed their texting. The film was shown again and this time two characters called "Disruptors" made weird noises and hurled imprecations at the screen. The white haired woman banged the piano and played what seemed to be a flute. The young man banged on cymbals and scraped the edge of same with a bow. He cruised around the audience which remained impassive. The two reminded me of unruly schoolchildren. We felt like doing some disrupting of our own. Finally, we fled into the rainy streets, regretting the misuse of our Saturday night.

Clearly, the "creators" wanted to say something but they failed abysmally to get their point across. If they were trying to skewer traditional opera, they only managed to send us running back to The Metropolitan Opera which, for all its flaws, does occasionally bring beauty into the world. Quando was produced in collaboration with Long Beach Opera and this was the world premiere. We cry "bullshit"!