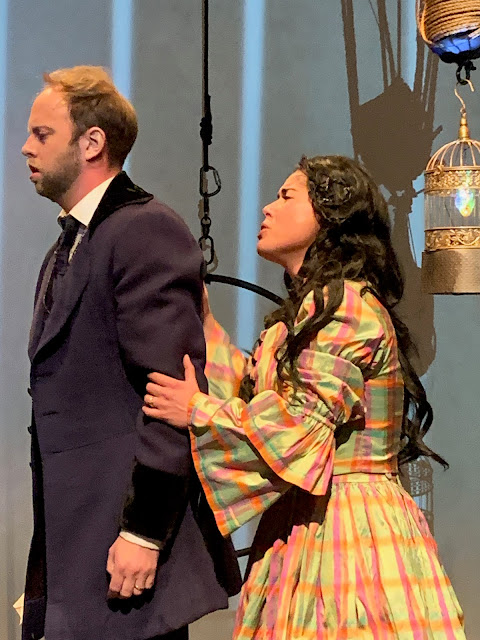 Erik Bagger and Brittany Fowler
An evening spent with New Camerata Opera is always interesting, entertaining, and valuable. Their latest entry into the world of intimate opera is a production of a one act opera by Kamala Sankaram with libretto by Rob Handel. The opera is called The Infinite Energy of Ada Lovelace and  it is obvious that infinite care was given to the evening in order to focus upon women. Additionally, the cast brought the story to life with infinite energy.
We confess we knew nothing about Ada Lovelace before last night; however, we spent infinite energy in learning about her since the work in question succeeded in arousing my curiosity. Lady Lovelace was the legitimate daughter of Lord Byron and his half-sister Annabella who left her husband and raised her daughter to be scientifically curious. The young girl was undoubtedly precocious and without benefit of formal education became quite a whiz at science and mathematics.
She married William Lord Lovelace and bore him three children whilst becoming the world's first computer programmer, mentored by Charles Babbage. The mid-18th c. saw impressive discoveries as well as impressive opera!  Sadly, Ada was sickly and died at the age of 36. Her story is an impressive one, particularly light of the fact that she was a woman without any formal training.
The opera focused on her relationship with those around her--her somewhat supportive husband, her importunate mentor, and her disgruntled housekeeper who bemoaned her neglect of her children. She came very close to abandoning the project with Babbage.
Another independent and talented woman was written into the libretto--Harriet Beecher Stowe. In the opera, she came to the Lovelace household to interview Ada about the family scandal. We were unable to find any evidence that this visit took place but we were so fascinated by the idea that this prominent abolitionist who wrote Uncle Tom's Cabin also wrote the untold story of Lady Byron, written about extensively in the Atlantic in 1869. If she never visited Ada, she certainly had quite an involvement with Ada's mother.
The fact that the opera led us down this rabbit hole is evidence of a wise choice by New Camerata Opera. The story is indeed a compelling one and it is to the credit of the cast that we were so drawn in, in contrast with the stories of most contemporary operas that leave us uninspired.
We are quite sure that both casts are equally effective. The cast we saw impressed us by bringing the story to life. As the conflicted Ada Brittany Fowler created a forceful character, reminding us that talented women who reached beyond the boundaries of wifely and motherly duties to achieve something important are not unique to our own time.
As her husband Lord Lovelace, Erik Bagger gave a sympathetic portrayal of a husband who wa somewhat protective and mainly supportive, however threatened he may have been by his wife's closeness to her scientific mentor/partner Charles Babbage, portrayed by a most effective Virdell Williams. Barbara Porto turned in her typically superb performance as Harriet Beecher Stowe. Heather Michele was believably grumpy and critical as the disapproving nanny and Ryan Allais made a welcome appearance as the butler.
If we have paid more attention to the drama than to the music, let us amend that right away. Music Director Nell Flanders conducted the string quartet plus piano with precision. Unlike most contemporary operas, the music was kind to our ears and definitely supported the action; like most contemporary operas, the vocal lines were not particularly melodic but better than most. Every member of the cast sang well; it's just difficult for us to say much about phrasing and technique with the particular style of writing. The libretto was surely adequate. Our companion agreed with our opinion that what we saw was a play with music--a very good well acted play with adequate music.
We applaud Jennifer Williams for her fine direction, Lianne Arnold for the set design which gave equal measure to science and mathematical equations, and to Asa Benally for her apt costume design.  We refer you dear Reader to our Facebook Page--Voce di Meche--for photos.
The all-too-brief work was bookended by cabaret acts.  We failed to appreciate the pre-opera singing of English translations of songs by Fannie Mendelsohn which involved masked singers; it was impossible to appreciate the vocal technique or the words. The post-opera performances were delightful with  members of the company performing the unexpected. We particularly enjoyed Ryan Allais singing something from Charlie and the Chocolate Factory, acrobatics by Heather Michele and Emily Solo, and Kristin Renee Young singing an aria from Berg's Lulu. Our apologies to those we left out.  As is common these days, there was no printed program.
It was not until we found some information by scanning the hashtag that we learned that composer Kamala Sankaram also wrote a piece we saw some years ago involving data-mining of the audience.  It was called Looking at You and it totally freaked us out!
© meche kroop
Posted by meche at 8:18 AM