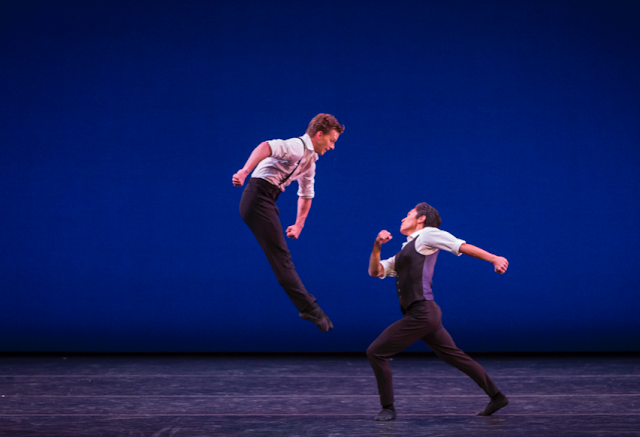 Daniel Ulbright and Joseph Gatti in "Les Lutins "choreographed by Johan Kobborg
For the past ten years Performance Santa Fe has hosted Daniel Ulbicht's Stars of American Ballet at the charming Lensic Playhouse. This is the first year we have been in town for this highly anticipated and generously applauded event. We have spent two delightful evening enjoying dance programs of great variety that included something for everyone. In our case, nothing can compare with the fluidity and aesthetics of classical ballet; nonetheless we found plenty to enjoy about the less-than-classical choices.
The versatile Daniel Ulbricht has assembled a group of talented dancers drawn from a number of American ballet companies and taken them on the road to bring ballet to cities that do not have regular ballet performances.
We scarcely know where to begin in our admiration; so let us start with the selections that  made the biggest impression. It would be a mistake to overlook the finale of the second evening which featured Mr. Ulbricht and Joseph Gatti (well remembered by us for the occasions of winning dance competitions).. Accompanied by Elaine Chelton's piano and the lively violin of Nicholas Danielson (with whom Mr. Ulbricht interacted), the two men presented a competition in which no one ever won. It began with Mr. Ulbricht performing a fleet-footed tarantella; when Mr. Gatti entered the two played a game of "can you top this" with successful rounds of terpsichorean virtuosity. They were joined by Indiana Woodward who was attired like the men in black pants held up by suspenders, white shirts, and black ties.
Next in our affection were a number of classical pas de deux that showed how many different feelings could be evoked by the vocabulary of classical steps. It seems as if the music chosen by the choreographer and the order of the various combinations contributed to the feeling tone.
For example, the brief excerpt from Christopher Wheeldon's "Polyphonia" , performed by Tricia Albertson and Chase Swatosh, filled us with feelings of anxiety. Was it the dissonance and angularity of Ligeti's music? Was it the dark stage with chiaroscuro lighting? No matter what, the work was gripping and the dancing extraordinary with unique touches to the lifts.
Another pas de deux, entitled "De Deux", a world premiere of a work by Christopher Charles McDaniel, utilized a classical composition by the late 18th c, composer/violinist Joseph Bologne Chevalier de Saint-Georges (one of whose operas was produced and reviewed by us several years ago inNew York City). The classicism of the music dictated choreography that hewed closely to classical forms, which delighted us. Dancers Quinn Starner and  Cainan Weber captured the classicism perfectly. The feeling tone was one of pleasant mutual enjoyment.
In Balanchine's "Sonatine", Ravel's music was performed live by Elaine Chelton, and evoked feelings of romantic love. Dressed in a floaty blue costume, Megan Fairchild was gallantly partnered by Gonzalo Garcia. The tenderness of the partnering was given an unusual twist by Balanchine when Ms. Fairchield pulled Mr. Garcia offstage from behind.
For "Rouge Lullaby", choreographer Alec Knight used Bartok's modern music to create a pas de deux with completely different feelings. The skin tight red leotards worn by Quinn Starner and Cainan Weber contributed to the modern effect and the athleticism of the dancers bought it all together to stunning effect--quite different from the effect of their performance in "De Deux".
Glazounov's romantic music inspired choreographer Ariel Rose to create a lovely traditional pas de deux for Tricia Albertson and Chase Swatosh that lifted our spirits with its lighthearted mood. The work received its world premiere and left us wanting more.
Another pas de deux choreographed by Mr. Wheeldon entitled "Bitter Earth" filled us with melancholy. Sometimes a romantic work is joyful and sometimes melancholy--just like life. We found the music odd. The instrumental background suited the work perfectly but the vocalism was distracting and seemed not to fit.
Balanchine's "Apollo" was the opening selection for the first night.  As revolutionary as Balanchine must have seemed in his day, this particular classic work seemed tired and old fashioned. Perhaps it was the awful sound production of Stravinsky's music but we found it the weakest of the classical selections. We couldn't help wondering whether Balanchine's depictions of the Greek god (Gonzalo Garcia) controlling and manipulating the three muses (Sara Adams, Megan Fairchild, and Hee Seo) was a projection of his own wish to control a bevy of ballerinas.
Regarding the remainder of the presentations, we were most impressed by David Parson's "Balance of Power",  a solo stunningly performed by Zoey Anderson. The music was odd and Ms.Anderson's strange sinuous movements alternated with sharper angular ones. The work seems to owe a debt to World Dance--mainly African and East Indian with jazz inflections.
There wasn't much in he way of program information but the colorfully clad young dancers of NDI New Mexico approached their dancing with gusto and were a pleasure to watch. An adult dancer, perhaps the director of the program, finished the number with a virtuoso solo.
The audience was equally impressed by the less classical numbers on the program but so much seemed to me recapitulations of mid-20th century Broadway dancing as seen in the movies. These works were high-spirited and energetic, as well as well danced.  They were just not our cup of tea.  That being said, the audience adored them all.
© meche kroop