THE STARS WERE OUT TONIGHT 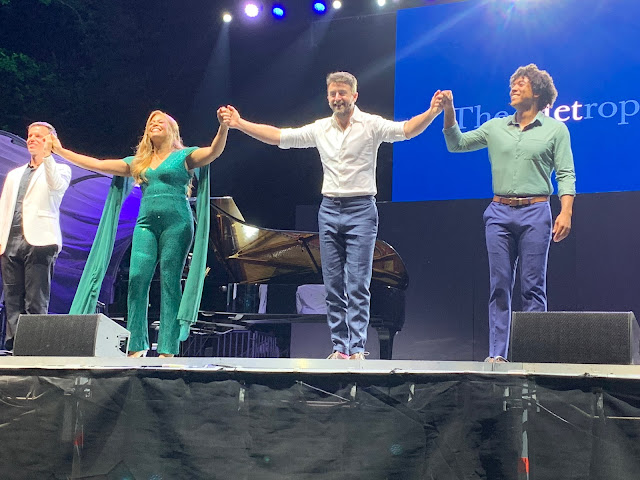 Bryan Wagorn, Brittany Renee,  Ben Bliss, and Justin Austin
There are advantages and disadvantages to outdoor opera.  On the positive side, one doesn't have to gasp for air behind a mask. Also, newcomers to opera can get a taste of this matchless art form without selling their children or mortgaging their home. The disadvantage--and it's a big one--is that one misses the frisson created by a live unamplified voice. Listening to an opera singer live is a sensuous experience; the voice is not only heard but felt in various part of the body. Dear listener!  The next time you hear singers live, pay attention to which part of your body vibrates.  But we digress.
Last night in Central Park, The Metropolitan Opera gave New Yorkers a treat in the form of three of their finest singers who presented a generous and varied program that brought thunderous applause from the mob that crowded Rumsey Playfield. Bryan Wagorn, Assistant Conductor at The Met served admirably as accompanist for the great variety of music on the program.
Tenorrific Ben Bliss opened the program with "Questa o quella" from Verdi's Rigoletto.  We have enjoyed Mr. Bliss' singing for years but this is the first time we heard him sing Verdi. Although amplification makes it difficult to take the measure of a voice we can say we enjoyed his performance last night in a number of selections.
His Duke was more charming than menacing--charming enough to bewitch the innocent Gilda. The elaborate decorations of the vocal line were exciting. Even better was the subtlety with which he invested Lensky's aria "Kuda, kuda" from Tchaikovsky's Eugene Onegin. We particularly admired the dynamic variety; the pianissimi were exquisite. Whilst thinking of Olga, he spun out the note so beautifully that we were holding our breath. (We ran out of breath before Mr. Bliss did!)
Again in "Dalla sua pace" from Mozart's Don Giovanni, the warmth of his coloring created a character that we cared about and the long drawn out pp. dazzled us as much as the elaborate fioritura. The big surprise of the evening was "No puede ser" from Sorozabal's La Tabernera del Puerto. We are always delighted when an evening includes some zarzuela. A cheating woman brings out anger but this character's anger is mixed with incredulity. Mr. Bliss captured it all and did so with mucho sazon.
Barihunk Justin Austin has been on our radar since his days at Manhattan School of Music when we marked him as a gifted young singer.  His star has risen rapidly and everything he performs is touched with genius. His Dr. Malatesta was expansive and persuasive in "Bella siccome un angelo" from Donizetti's Don Pasquale. He managed to sound sincere as he palms off a young widow as his convent-raised sister but also lets the audience know it's a ruse.
What a masterpiece of acting! What flexibility in the fioritura!
He exhibited some very fine German in "Lieben, Hassen, Hoffen, Zagen" from Strauss' Ariadne aux Naxos. His English diction in "There was a storm" from Blanchard's Fire Shut Up in My Bones and in "Ballad of the Easy Life" from Weill's Threepenny Opera made every word crystal clear. We never take that for granted.
This was the first time we heard Soprano Brittany Renee and found her to be a formidable artist. Her voice glittered in "Je dis que rien ne m'épouvante" from Bizet's Carmen but we had to avert our eyes since her glamorous appearance was at odds with Micaela's shy character. In "Chi il bel sogno di Doretta" from Puccini's La Rondine she looked more like the character and showed her gifts as a storyteller.
She rose to the challenge of Violetta's Act I aria from Verdi's La Traviata negotiating the two opposing sides of Violetta's character. In the cabaletta "Sempre libera" we heard some impressive fireworks--just right for a party girl in denial. We don't claim to know anything about jazz but Duke Ellington' "In a Sentimental Mood" sounded just fine to us and illustrated her versatility.
Having such superb singers in three different fachs permitted the programming of a number of duets in various combinations. In "Esulti pur la Barbara" from Donizetti's L'Elisir d'amore, Mr. Bliss got to play the newly confident Nemorino with Ms. Renee as the astonished Adina, acting rather bemused.
Ms. Renee made a fine Pamina in duet with Mr. Austin's Papageno in "Bei Männern" from Mozart's Die Zauberflöte. And our two male singers brought new life to "Au fond du temple saint" from Bizet's Les Pêcheurs de Perles.  Not only was the harmony exquisite but the two men were gazing off into the same space so convincingly that we felt we could see the scene through their eyes.
We aver that Rogers' Carousel is an American opera and Ms. Renee and Mr. Austin's performance nailed "If I Loved You".  We feel the same about Sondheim's oeuvre.  In "Agony" from Into the Woods, Mr. Bliss and Mr. Austin played a game of competitive complaining between two princes.  What a delightful comic turn!  From Bernstein's West Side Story, Ms. Renee and Mr. Bliss gave us a "Tonight" to remember.
As if this banquet of music were not sufficiently satisfying, our artists offered  postprandial friandises.  Mr. Bliss sang a glorious "Maria" (also from West Side Story) that turned a woman's name into a vocalise. Mr. Austin offered a heartfelt "I Dream a World" --text by Langston Hughes set by Damien Sneed. Could Ms. Renee's charming "Will He Like Me?" come from Harnick and Bock's She Loves Me?  Well, we liked her.  A lot.
© meche kroop
Posted by meche at 7:23 AM