A FESTIVAL OF SONG 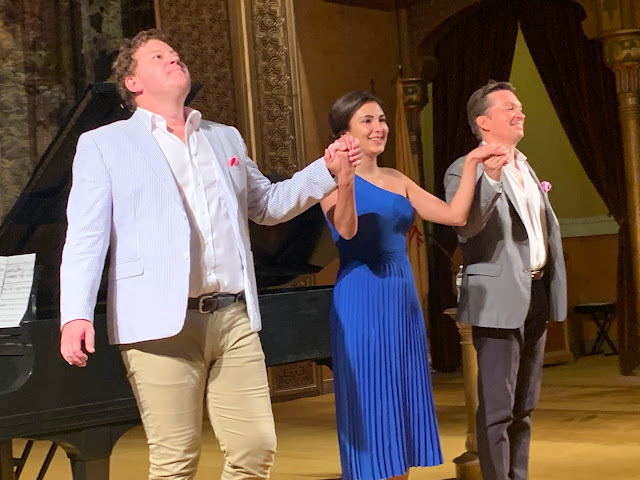 Nicholas Brownlee, Elena Villalón and Robert Tweten
We spent a delightful Sunday afternoon with Performance Santa Fe which presented the second in a series of three vocal concerts in their Festival of Song series. The Scottish Rite Temple, which has a beautiful small theater, was just the right size for the event and possesses fine acoustics.
What a win-win situation for both Performance Santa Fe and also for Santa Fe Opera! As Nicholas Brownlee, our bass-baritone for the afternoon explained, it's a very special opportunity for an opera singer to shed all the theatrical trappings of the opera house and to achieve an intimate rapport with his audience. From the point of view of the audience, they can experience the same intimacy and also experience a connection with the poet whose words inspired the art song.
We admit to a departure from the latter benefit when we completely ignored the grim text utilized by Brahms for his Fier ernst Gesänge Op.121. Religious liturgy holds no interest for us even when translated into German by Martin Luther, a rather grim fellow himself.  Instead, we focused on the piano part, so persuasively performed by Robert Tweten, and the very textured tones of Mr. Brownlee. We particularly enjoyed the way Brahms colored both parts darkly, achieving an astonishing whole.
In a wisely contrasted set of songs by Charles Ives, Mr. Brownlee was able to reveal much more than his magnificent instrument. "Songs my mother taught me" is surely the same text used by Dvorak in his Gypsy Songs and it rings of bittersweet memories. In "Memories A&B" we loved the schoolboy enthusiasm Mr. Brownlee portrayed in "Very Pleasant" which we have always called by it's opening line, "We're sitting in the opera house". But tops on our list was the cowpoke sonnet known as "Charlie Rutledge" in which Mr. Brownlee chewed up the (absent) scenery.
Mr. Tweten also moved gracefully from the grim to the gay! Moreover, as he accompanied the stunning soprano Elena Villalón in Turina's Tres Arias, Op.26, his hands drew forth all the requisite Iberian colors and rhythms. Our lovely soprano has all the sazon needed to convey the poetry of the texts which we enjoyed reading aloud when we got home. All three texts were lengthy and profound but were explained briefly before the performance, a gracious welcome indeed!
Ms. Villalón has a voice of beauty, especially round at the top of her range. The entire upper register had a silvery sheen. Of equal importance is her gift for storytelling, not unlike that of Mr. Brownlee. We do not take that quality for granted. Nothing is more disappointing than hearing a singer of great vocal beauty but lacking in interpretive skills.
Angel de Saavedra's "Romance" tells of a mighty warrior who stayed away so long that he lost his love. In despair, he releases his captives and renounces his bounty. How well the music, text, voice, body movement and facial expression joined together!
The text of "El Pescador" (written by Jose Ignacio Javier Oriel Encarnación) reminded us of a few of Schubert's songs but the Spanish language dictates a different kind of voice and piano. In any case a fisherman woos a young lady.  Wooing sounds different in Spanish than it does in German!
"Rima" (author unknown) is a passionate look at thecompelling attraction in a pair of eyes.
The songs of Tom Cipullo are unknown to us, since we do not pursue contemporary American song. Nonetheless, we liked the way Ms. Villalón interpreted them. "Crickets" was a bitter look at our current ecological disaster. "Summer into Autumn Slips" (text by Emily Dickinson) is a metaphor for life's declining years. If we interpreted correctly, Stanley Kunitz' text for "Touch Me" is also about the decline of love and desire.  It makes us wonder why Mr. Cipullo chose three texts about decline!
We are so looking forward to seeing what Ms. Villalón does with the role of Nanetta in Santa Fe Opera's Falstaff.  We have been enjoying Mr. Brownlee's performance on the stage for at least 8 years so we will not be surprised to see him make a fine Kurvenal in SFO's Tristan und Isolde.
© meche kroop
Posted by meche at 4:53 AM