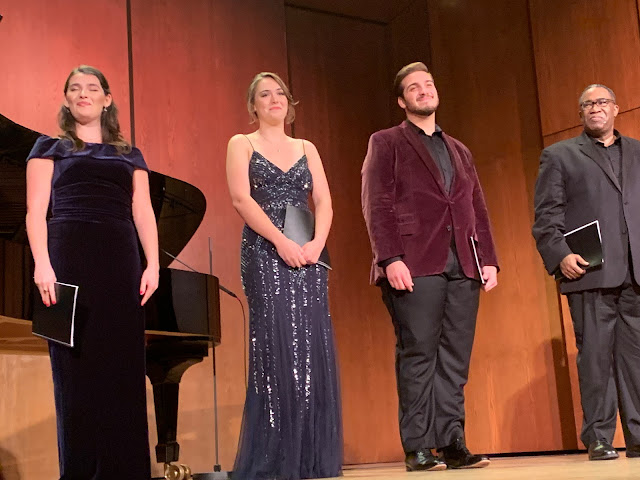 What a magical evening we spent in the company of four artists from the Curtis Institute of Music in Philadelphia, on tour as part of Curtis on Tour. Led by esteemed bass-baritone Eric Owens, who graduated from the Curtis Institute a quarter century ago and who now serves on their faculty, three emerging artists dazzled us with their artistry. Mr. Owens' legendary gifts have been sufficiently recognized and treasured worldwide, so let us focus on the three young artists who seem to have profited enormously by his tutelage.

Let us begin by praising the program which contained not a single disappointment. There was something for every taste--art songs, folk songs, cabaret songs, musical theater songs, and of course a couple operatic scenes. The theme of the evening seemed to be love in all of its many manifestations--the longing, the satisfaction, the disappointments.

Who beside Brahms has brought so much artistry to the folk song! We never pass up an opportunity to hear his Liebeslieder Waltzer, Op. 52, but are far less familiar with his Neue Liebeslieder Walzer, Op. 65. We imagine that the first collection was so successful that Brahms was urged to set more of Georg Friedrich Daumer's text. (The final song of the group was written to text by Goethe but it was not included.)

The solos were particularly poignant, especially those given to Ms. Fleiss which seemed to emphasize the woes of a maiden unsuccessful at love--"An Jeder Hand die Finger" in which a maiden has bestowed all her rings on worthless men, and in "Rosen steckt mir an die Mutter", in which she sees herself wilting and stripped of leaves like a rose.  This characterization would be repeated at the conclusion of the evening when she sang a most pathetic Gilda in the quartet from Verdi's Rigoletto.

Ms. Baker was very well suited to the role of temptress in "Wahre, wahre deine Sohn" in which she tells a neighbor that she is going to bewitch her son. Later, she would be similarly seductive as Maddalena. Hearing the two women bring Sophie and Octavian to life in "Mir ist die Ehre widefahren" from Richard Strauss' Der Rosenkavalier was all one could wish for and gave the two of them an opportunity to interact, which was not possible in the Brahms.

When a performance is that exquisite, the mind's eye supplies the costumes and settings and we were transported right into 19th c. Vienna. The two women sounded so harmonious together that we longed to hear them sing "Dôme épais le jasmin" from Delibes' Lakme. We are putting that on our wish list!

We were also happy to hear all voices together in a few of the songs and cannot think of any work written for four voices that we enjoy more . None of the songs were written for two male voices but we did get to hear Mr. Tancredi and Mr. Owens harmonize in double delight with "Au fond du temple saint" from Bizet's Les Pêcheurs de perles, our favorite duet for male voices.

We noticed a few things about Mr. Tancredi that augurs well for his future success. One is his vocal artistry; few tenors produce such round Italianate vowels, which we attribute to his consistent embouchure. There is no "spreading" and no forcing--rather, complete security of technique. We have reviewed Mr. Tancredi as an undergraduate at Manhattan School of Music where we noticed his promise. Again we observed his growth as a Santa Fe Apprentice in 2019. Nothing makes us happier than seeing growth in an artist. The other thing we appreciated was his total immersion in the character of Nadir. We saw the temple and the crowd through his eyes-- and that is the excitement of opera!

We have also heard Ms. Fliess  a few years ago, singing a duet from Rossini's Tancredi, singing the title role as a mezzo-soprano. We were surprised to hear her as a soprano but happy to report that the high notes are crystalline and unforced. It will be interesting to see where she goes next. Her duet with Mr. Tancredi from Rodgers and Hammerstein's Carousel was a joy to hear.

Ms. Baker is new to us and we can hardly wait to hear her again. Aside from a lovely instrument she knows how to get a song across and we delighted in her delivery of "Langsamer Walzer" from Schoenberg's Brettl Lieder which is also known as "Den Spiegel von Arkadien" which we alway call "the Bum bum song". Her interpretation was highly dramatic and filled with humor, making every word count.

We have alluded to the closing number, the famous quartet from Rigoletto and it was the perfect way to end this varied program, leaving us with the impression that great voices and great music need not be categorized. Art song or folk song, aria or cabaret, just sing it with style and substance and we are happy.