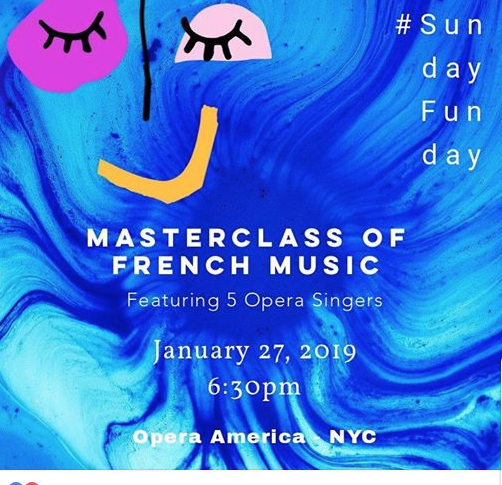 On Sunday evening, January 27, the wonderful French mezzo-soprano Anna Cley gave a masterly masterclass at the American Opera Center.  Ms. Cley began the evening singing "Les Berceaux" by Gabriel Fauré and set an example of exemplary singing for the five students she was about to work with. Ms. Cley has a beautiful, dark mezzo voice. She was born in Normandy and started studying instrumental music and singing as a child.  She sings opera in Europe, the United States and in other countries. She also performs in concerts. In addition to her own performances, she loves working with young singers and has great expertise in teaching singers the correct pronunciation of the French language.

Her first student was Elizabeth Saunders, who sang Charles Ives "Élegie", a sad song of loss of love and the departure of Spring.  She has a lovely dark voice and her diction was quite clear.  After she sang for a while, she was interrupted by Anna Cley, who wanted to clarify some French diction. She told her that her consonants could be improved and her vowels had to be sharper.  She worked with her particularly on letters V, D, and P, explaining how they should be pronounced and making the sound longer. She said the letter P should be elongated and leave space in the back of the mouth.  Elizabeth quickly picked up the correct pronunciations and continued singing the rest of the song.  She quickly understood of all of Ms. Cley’s instructions and, as a result, she sang the art song very well.

The next student was baritone Andrew Parsley. It was obvious he had a big baritone voice, but he needed help in making the sound a bit more round to show the real beauty of his voice.  He sang a few lines when Ms. Cley stopped him to make some corrections on his pronunciation.  First she asked him to speak the words of the first part of the aria; then to sing them. She told him the word “avant” needed more projection.  She also worked with the “p” telling him to use his lips to get the right sound and worked on the “t” and “v” attaching them to the vowels. The more she worked with him, the bigger and more beautiful his voice became. He finished singing the aria and the great strides he made from Ms. Cley’s teaching were quite amazing.

Soprano Zoya Gramagin sang the lovely aria from Massenet’s opera Herodiade,“Il est doux” in praise of the Prophet Jean (the Baptist) for being kind and good. Her voice is big and she uses it well.  She was originally a mezzo but has now moved on to soprano repertoire which makes for a lovely dark sound. She has a good sense of phrasing and understanding of the aria. Ms. Cley listened to her for a while then stopped her to say that her first few words were not clear.  She worked with her on the “p” as in Papagena and said the “pah” should be explosive. For “m” she told her to enjoy the sound. With Ms. Cley’s gentle coaching, and good hints, Zoya’s voice became even bigger than at the beginning and also freer.

Tenor Nathan Thorp sang Don Jose’s aria “La fleur que tu m’avais jetée” from Bizet’s Carmen, pouring out his feelings of love for her. He has a lovely tenor voice, but at the beginning he was a little stiff and his singing was a bit too slow.  Ms. Cley first got him to stand straight, as he had gotten into some bad habits. She also told him to relax and not to be overly conscious of the effect he was trying to make. Just making those changes opened up his voice and we could hear how beautiful it is.  She also worked on some consonants..the “f” and “d.” When she had him sing the whole aria again, his singing had really improved and he went into a beautiful head voice towards the end of the aria, making a lovely end to the aria.

The final student was Rachel Hall, who sang another aria from Carmen, Micaela’s aria…”Je dis que rien ne m’epouvante.”  She is looking for Don Jose and she is trying to be brave and let nothing scare her. Ms. Hall has a lovely  big soprano voice and uses it well.  She is also very assured on stage.  She had some lovely pianissimos.  Ms. Cley worked with her on some vowels and consonants “eh” for mère, “ah” and some other sounds. She picked up on the help she received from Ms. Cley’s teaching and sang with great feeling.  She was also the only singer who did not need to use her music.

The wonderful accompanist for the evening was Kelly Lin. She followed the singers, was very supportive, and never overpowered any of them.

Ms. Cley ended the session by have a little concert.  Each of the singers performed their arias without any stops.  Each of them had made great progress from the teaching of Ms. Cley.  At the end, she treated us all to her singing of the "Seguedilla" from Bizet’s Carmen.  Her burnished mezzo voice made for a very sexy rendering of the aria.  Listening to the way she sang the aria I was much more aware of the clarity of the French language than I have ever been. She is really a wonderful teacher and I hope she does some more master classes in New York.