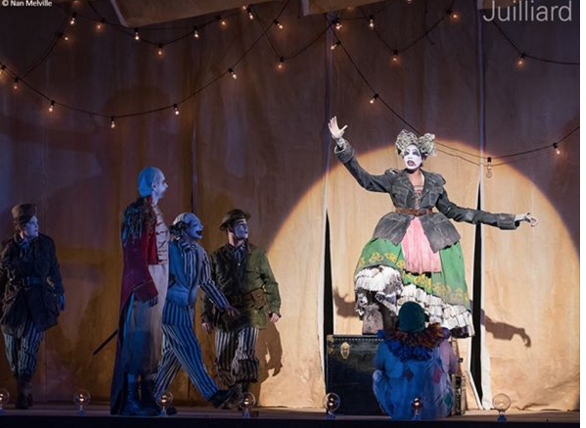 Neither work on Juilliard Opera's double-bill is frequently performed; both deserve to be. The program notes written by the wildly imaginative director Ted Huffman describe in detail the resonances between the two one-act operas. To us, they are both parables about war.  Francis Poulenc's wildly funny opéra bouffe, Les Mamelles de Tirésias,  was produced in 1947 but based upon a surrealistic 1917 play by Apollinaire.

Although it was written about World War I, it was perfectly suited to the post-World War II period. War tends to waste a country's resources, both capital and human; following wars there is an understandable "baby boom" as the countries involved must replace the population. As Shakespeare put it--"The world must be peopled".

The moral urging of Le Directeur who opens the show is to produce babies. In this role, baritone Theo Hoffman employed his fine baritone and considerable comedic acting skills.

In an interesting gloss on feminism, the heroine Thérèse, dissatisfied with her role as a woman, decides to become a man and takes the name Tirésias. She sacrifices her breasts, grows a beard, snatches a man's moustache, and plots to enter several male dominated professions. And this was long before gender altering surgery was performed.  How very prescient! Soprano Liv Redpath sang beautifully with a clear high soprano and generated sympathy for her character's ridiculous ambitions.

This abandonment of her wifely duties leaves her husband (Le Mari) no choice but to become a woman and make babies. Samuel Levine could not have been any better in this role, fighting off the advances of Le Gendarme who arrives on horseback. Fan Jia's baritone was perfect for this role. We have heard him sing in French before but had no idea he was a skilled comic actor.

You may be wondering how Le Mari made the babies.  Tens of thousands of them! He started what looked like a baby factory, that's how. And he decided to produce babies who would grow up to be in professions he needed. Again, a prescient idea to imagine in vitro pregnancies. And also a barbed reference to parents who try to control their offspring's life choices.

As two embattled friends arguing over gambling we heard the excellent tenor Matthew Swensen (Lacouf) and the equally excellent baritone Xiaomeng Zhang (Presto). We have no idea what these characters had to do with the story but the entire piece is surreal.

We recall seeing this opera at Juilliard about 3 years ago and we remember that it was cleverly directed and costumed--but also very different from this production. Samal Blak was responsible for the Scenic and Costume Design which was highly original. The very long credenza achieved multiple identities, even that of the baby factory from which Mr. Swenson crawled out in diapers. A large entrance area upstage contained a two-dimensional horse for Mr. Jia's arrival. Costumes were appropriate for the late 40's and were occasionally shed. It isn't often that one gets to see tenors in diapers, tenors in dresses,  baritones in boxers, and sopranos in scanties.

The libretto contained much wordplay that one might have missed if one did not speak French. Let us just say it was raunchy in spots. Director Ted Huffman did not miss a single opportunity for a sight gag and the audience shared some marvelous belly laughs.

Poulenc's music is eclectic and there was much jazz to be heard and references to other composers' works. We heard quite a bit of dance music--waltz and polka rhythms abounded. In the pit there was a lively young woman conductor Keri-Lynn Wilson, who brought out every ounce of delight in the score. In a serious moment we believe we heard presages of Dialogue des Carmélites which Poulenc would compose a decade later. The Juilliard Orchestra has no peer and performed beautifully under Ms. Wilson's baton.


The second part of the double bill was Der Kaiser von Atlantis, also known as Die Tod-Verweigerung (the Disobedience of Death) or Der Tod Dankt Ab (Death Abdicates). Written by Viktor Ullman in 1943 in the Nazi showcase concentration camp Terezin, with libretto by Peter Kien, the opera was seen in rehearsal after which both men were hustled off to Auschwitz and tragically exterminated.  The opera has been produced in Europe but has been rather neglected in New York, although we enjoyed a production of it about 3 years ago by Opera Moderne.

The tragic circumstances of two talented lives cut short lends import to a work that easily stands on its own.  For this, we thank Ullman's fellow prisoners who managed to rescue the work when Terezin was liberated, as well as the spiritualist who purportedly communicated with Ullman's ghost in finishing the instrumentation!

It's a one act piece of great cynicism which makes one think of Brecht and Weill.  Ullman's music is at times rather jazzy, referencing composers of many periods. The instrumentation includes an alto saxophone, a banjo and a harmonium, as well as a piano and harpsichord; it never sounds boring or "academic". Again, Maestra Wilson's conducting was marked by clarity.

The story is an ironic one in which the Kaiser (a stand-in for Hitler) tries to co-opt Death by killing off everyone; this results in Death taking a holiday.  No one dies.  The world is filled with the walking dead.  A better image for prisoners in a concentration camp could not be imagined!  In the middle of this, a soldier and a girl find love.  At the end, Death takes the life of the Kaiser.

As loud as we laughed at the wild hijinx in the Poulenc, we did not laugh during the Ullmann. It does have a hopeful ending with Der Kaiser eliminated and Der Tod back in business doing what he is supposed to do.  But we just didn't find it funny.

Perhaps the allegory is not perfect but no doubt Kaiser Overall represents Hitler and indeed baritone Dimitri Katotakis sported a Hitlerian moustache. But we didn't understand why he would be wearing the black and white striped pants of the victims held in concentration camps. Bass-baritone Cody Quattlebaum made a fine Lautsprecher and bass Daniel Miroslaw enacted Der Tod as a not unsympathetic character but rather one who fulfills a natural function and rebels against Kaiser Overall's plan to kill off the entire world.

Mezzo-soprano Amanda Lynn Bottoms excelled in the role of Der Trommler who supported Kaiser Overall. She was wearing the most extravagant outfit (with very high platform shoes) designed by Paul Carey.  Harlekin was well performed and sung by tenor Gerald Schneider in the crispest German imaginable.

There was a fine duet in the third scene between two soldiers--tenor Alexander McKissick and soprano Rebecca Farley. They start out trying to kill each other but death is off-duty so they survive to fall in love. Great message there--"Make love not war"; perhaps librettist  Peter Kien was anticipating the 1960's!

Zack Winokur provided the choreography for both operas. We particularly enjoyed his work in the Poulenc.

We consider the evening to be a major success--we were entertained but also stimulated to think about the terrible cost of war. How tragic that humankind does not learn from its mistakes! Just as science fiction often becomes science. so literary figures may anticipate social changes like test-tube babies and gender-altering surgery.

All of the superb singers are enrolled in graduate programs at Juilliard. We expect nothing less than brilliant careers for all of these talented artists. We enjoyed being introduced to singers we hadn't heard before and hearing singers we had heard only in recital. It's difficult to anticipate how well they will perform as a character in an opera and when we witness such success we tend to become quite tickled.