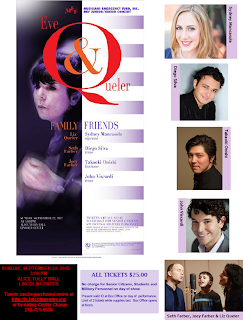 The honorable Maestra Eve Queler was honored Sunday afternoon by the Musicians Emergency Fund in a thrilling recital involving her "family and friends".  If you love hearing artists on the brink of stardom as much as we do, you were there and shared our joy in witnessing their well-deserved and enthusiastic applause.

The four rising stars, prize winners all, were soprano Sydney Mancasola, tenor Diego Silva, tenor John Viscardi and baritone Takaoki Onishi--all helped along their career pathway by Maestra Queler.  Their performances yesterday indicated that they were each more than worthy of her attention.

The first half of the program was heavily weighted in the bel canto direction, to our delight.  Mr. Onishi distinguished himself with his superb control of dynamics in "O Lisbona" from Donizetti's Don Sebastiano.  Mr. Silva lent his sweet tenor to "A te, o cara" from I Puritani, spinning out Bellini's long gorgeous melodies with excellent phrasing.  Ms. Mancasola showed a fine facility for French in arias from Massenet's Manon; her diamantine voice was focused and her acting convincing--this Manon truly conveyed the impression of abandon.  Sticking with Massenet, Mr. Viscardi, with his warm sound and excellent French, gave a moving version of "Pourquoi me réveiller" from Werther

The only German aria on the program was Korngold's "Tanzlied" from Die Tote Stadt; Mr. Onishi demonstrated a facility with German as well as with the waltz rhythm.  "Angelo casto e bel" from Donizetti's Il Duca d'Alba gave Mr. Silva an opportunity to show off his impressive Italianate quality.  Ms. Mancasola returned with a deeply felt rendition of "O quante volte" from Bellini's I Capuleti ed i Montecchi; she set the air to vibrating in the receptive Alice Tully Hall.  Mr. Viscardi brought this part of the program to a rousing close with Offenbach's Kleinzach song from Les Contes d'Hoffman.

But no, it was not over yet!  Ms. Queler's daughter Liz came onstage with her husband Seth Farber and their son Joey.  The audience was treated to three selections from a project of theirs entitled The Edna Project in which they set poems of Edna St. Vincent Millay with Mr. Farber playing a jazzy piano score,  Liz Q. playing guitar and mandolin with a folky flavor and young Joey providing the rhythm.  It was an unexpected treat, particularly since the music and words supported each other to an impressive extent.  This is not something we hear often in contemporary music.  We were delighted with the three-part harmony.  If only every American family could make music like this!

The second half of the program was devoted primarily to Verdi.  Mr. Onishi's "Per me giunto...O Carlo, ascolta" was performed with enough baritonal heft that we can readily see him as the next Verdi baritone, which, in our eyes, is far more important than being a "barihunk", although the handsome Mr. Onishi readily qualifies for that designation as well.  Four selections from Rigoletto followed and Mr. Viscardi made a fine arrogant Duke, causing the audience to go wild.  Ms. Mancasola made a lovely Gilda and negotiated the tricky upward leaps, trills and fioritura of "Caro nome" with consummate aplomb.  In her duet with Mr Silva, the two of them had a touching chemistry and ear-pleasing vocal blending.

Ending the program with Bizet's "Au fond du temple saint" from Les Pêcheurs de Perles was a masterstroke; Mr. Silva and Mr. Onishi made a fine pair.  But the concert was not yet over!  All the singers joined for "Libiamo" from Verdi's La Traviata and we left Alice Tull Hall ready to toast to pleasure in all its forms.