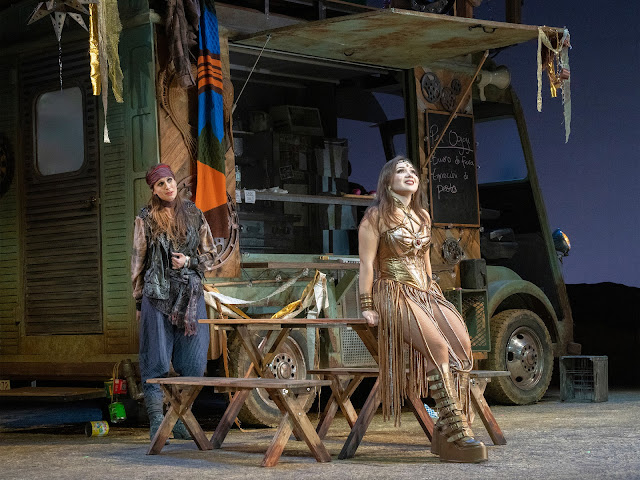 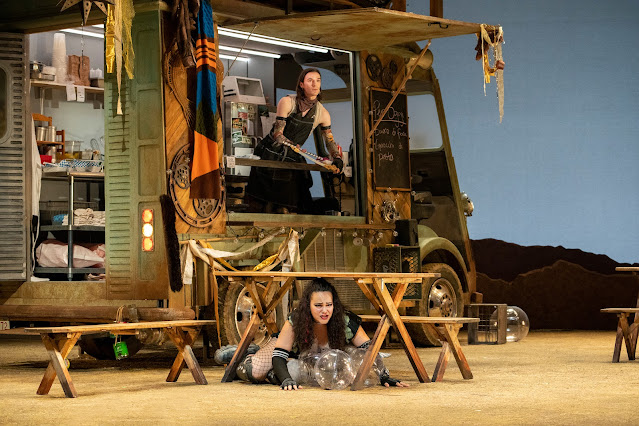 Now that masking is optional, we have happily returned to reviewing performances at  The  Juilliard School and last night we saw TWO performances. The first one was a musically authentic production of a Händel opera in which the stellar Maestro Gary Thor Wedow led Juilliard 415, the schools principal period instrument ensemble, in a musically authentic reading of Atalanta.  Thanks to some recent exposures to Baroque performances, we were not surprised by the presence of musicians onstage with the singers from time to time.  As a matter of fact, the overture put trumpeter John Thiessen onstage   and some excellent duets were heard with the woodwinds and theoborist/lutenist Dušan Balarin. Harpsichords were played by Mo. Wedow himself and David Belkovski,

Not only did Mo. Wedow draw such admirable performances from his orchestra, but the vocal values were equally dazzling. Soprano Shelén Hughes, whom we wrote about when she was a student at Manhattan School of Music, made a powerful Atalanta who is supposed to be a Princess disguised as a shepherdess named Amarilli. Ms. Hughes has a voice of notable flexibility and a strong stage presence.

As her beloved "Tirsi" (actually King Meleagro in shepherd disguise) we had the remarkable mezzo-soprano Mary Beth Nelson (whom we heard recently at the National Arts Club as Cenerentola) utilizing the same dazzling technique as she used in the Rossini.

Another mezzo-soprano Maggie Renée immersed herself totally in the role of Irene, aggressively tormenting the man who loves her in spite of some better advice by her father Nicandro (bass-baritone Donghoon Kang). Richard Pittsinger made an excellent Aminta who had such stunning vocal moments that we found ourself holding our breath.

The hit of the evening was baritone Jared Werlein (whom we wrote about enthusiastically in a freshman recital) who brought the opera to a close as Mercutio, about which more later. Keep reading!

So, what was the second performance we attended at Juilliard? Well, it was simultaneous with the one we just described! It was a Broadway show with a lavish set (by Ryan Howell) and striking costumes (by Ryan Park) with a crazy story having nothing to do with the libretto Händel chose on which to drape his fluent arias, of which there were many.

We completely understand that audiences of three centuries ago were enchanted by pastoral stories which could be rather boring for contemporary audiences. We have observed an unending series of performances of Händel's operas tricked out with beach chairs and umbrellas and all kinds of nonsense meant to engage a 21st c. audience. It seems like a lack of trust in the music to stage it so.

The theme of the story is how young people play games on the court of love. Our association was that of middle school students who fake disinterest in those on whom they are crushing and who try to make their crushes jealous by flirting with others. So we appreciate that there is room here for a "concept".  Much as we dislike updating, audiences must be attracted or opera will die.

In this production, director Omer Ben Seadia's concept was a group of young people at some kind of music/art festival in the desert. An overhead sign on stage read "Bacchanalia". On stage left was a performing stage with drums that didn't get played until the final postlude with the fantastically costumed cast trying to disco dance to Baroque music.  You can imagine!

On stage right was a food truck in which Aminta seemed well supplied with ingredients and a chef's knife which he wielded whilst singing, making us a bit nervous. When he and Irene finally get their games straightened out at the end of the opera they can be seen through frosted glass, presumably fornicating.

Irene seemed to be the one admitting outlandishly costumed participants to the festival, checking ID's and cell phones. But the platform shoes seemed more suggestive of the 70's. Does it matter?  No one seemed to care but rather enjoyed the eye candy. But the story seemed shoehorned into Ms. Ben Seadia's concept. After the opera we read her Director's Note and can see where she was coming from. However, the stage business was so overdone that it distracted from the music. It seemed as if every important aria was overshadowed by someone moving furniture or performing some kind of acrobatic activity. There were times when we had to shut our eyes to hear the beauty of the voices.

We did promise to tell you about Mr. Werlein's performance since one might say he stole the show. In extravagant white drag and platform boots, his Mercurio sang about the blessings of love, reminding us that this work was created to celebrate a royal marriage between Frederick (son of George II) and Augusta of Saxe-Gotha. The bridal couple did not deign to attend the premiere which was anything but modest and involved a great deal of spectacle. Well, this 21st c. audience did not suffer from want of spectacle!