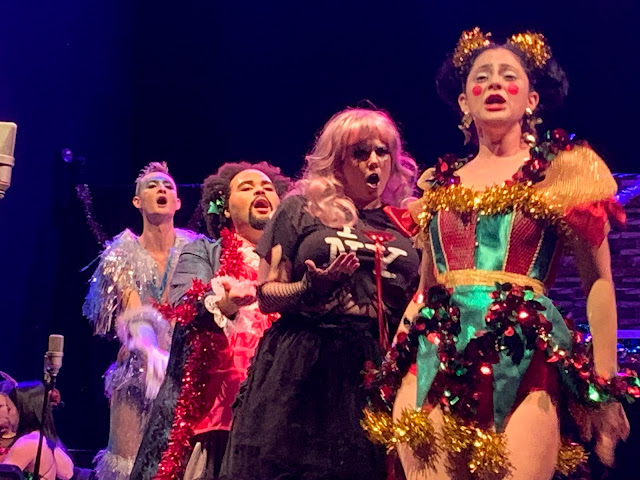 John Taylor Ward, Elliott Paige, Alissa Anderson, and Samarie Alicea
Last night marked a major event on the New York music scene. It was the opening night gala of Heartbeat Opera's annual extravaganza; it was extraordinary and extravagant--over the top in terms of concept and execution. With his customary wit and originality, Director Ethan Heard created an evening of satire and camp that left the audience exhilarated. The evening scored high marks even for the fundraising which was actually fun. One would have to be a Scrooge not to make a financial contribution to a company that actually pays its members.
The concept for the show Messy Messiah was having fun with Händel's masterpiece.  Methinks that singers love the piece because they get paid; but perhaps it is overplayed at this time of year and a worthy object for poking, prodding, twisting, and toppling. We adore satire and particularly the LGBTQ version. We want you to go to one of the two shows tonight (if there are seats available) and hesitate to spoil the fun so...if you are going, read no further. Here come the spoilers.
Cast members and musicians come down through Elliott Paige's chimney as this tenorrific artist relaxes by the fire. Lengthy-limbed bass-baritone John Taylor Ward sweeps around the stage with stature exaggerated by what must be platform shoes, fingers elongated into icicle-like appendages. Soprano Samarie Alicea, cute as a button, prances about in harlequinish attire. Adele's "laughing song" from Johann Strauss' Die Fledermaus was given quite the twist. Contralto Alissa Anderson, wrapped in a voluminous black cloak and carrying a lantern, gave us a novel interpretation of "Must the Winter Come So Soon" from Barber's Vanessa. Ballet dancer Jourdan Epstein left us gasping by balancing on point on the top of a wine bottle--on one foot!
We are posting multiple photos on Facebook for those who will not have the privilege of attending. Even those fortunate enough to attend one of tonight's performances will miss one of the highlights of the evening.  A mystery guest arrived wrapped in gold fabric like a gift. Hearing an ethereal voice singing "Vedrò con mio diletto", we instantly recognized the brilliant voice of counter-tenor Anthony Ross Costanzo. How appropriate to portray this guest artist as a gift!
There were gags both subtle and obvious, including a photo of the late drag persona Divine showing up in the middle of "Oh night divine".
The chamber orchestra was completely in the mood with Music Director and violinist Jacob Ashworth conducting Daniel Schlosberg's inventive arrangements of the Händel, Tchaikovsky, Barber, and Strauss selections. Trumpeter Evan Honse had a fine solo onstage. In the "pit" he played alongside Mr. Schlosberg on the piano, violist Hannah Levinson, oboist Hsuan-Fong Chen, and Mr. Ashworth.
The lavish and witty costumes were designed by Fabian Aguilar and  makeup, by Maiko Ando. Choreography was realized by Eamon Foley.
The energy never let up nor did the dazzlements cease. Heartbeat Opera never heard of the "Irish goodbye".  Just when you thought there could be no further entertainment, on came yet another solo. The evening was capped by a role-reversed onstage proposal. We are keeping that a secret!
© meche kroop
Posted by meche at 6:22 AM