WE ARE BACK IN ACTION 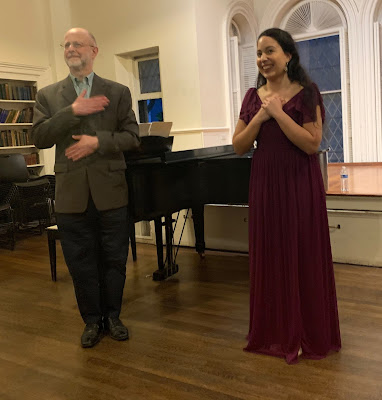 Our voce has been silent for these past 15 months due to- you know-Covid. We actually had forgotten how to access our blog and required assistance from Google! To celebrate the return of live music we have chosen a new typeface which we hope will be as easy on the eyes as Saturday night's concert was easy on the ears.

Eurasia Foundation's Aza Sydykov found a lovely and comfortable venue with adequate spacing between chairs and was wise enough to start the new "live season" with the magnificent mezzo-soprano Linda Collazo who, incidentally, has been singing for us at our musicales, garnering wild applause and many new fans from among the guests.

Saturday's recital focused on arias and songs by strong women and about powerful women in all their glory, among whom we count Ms. Collazo who is advancing her career with great care and dedication. A friend of ours, not easily impressed, who always compares young talent to the greats of ages long gone, was similarly dazzled by this gifted young artist. There is an admirable evenness of tone throughout her range, which is a wide one. All of our chakras were vibrating in turn.

Her Carmen brought new roundness to the character that had us visualizing each scene in our mind's eye. Collaborative pianist (and expert on Spanish music) Pablo Zinger let loose with his own jazzy accompaniment to the second verse of the Habanera, a work that we would have enjoyed more as a solo, the better to focus on its inventiveness. Ms. Collazo's seductive Seguidilla was no less exciting. No Don Jose could have resisted!

Bizet is surely not the only composer limning the characters of powerful women. Rossini loved not only mezzo-sopranos but also strong female characters like Isabella in L'Italiana in Algeri.  "Cruda sorte" bemoans the character's unhappy fate as she has been shipwrecked, separated from her lover, and threatened with being in a harem. Just listening to the artist's interpretation, you would realize that Isabella is not going to accept her fate and that she would triumph in the end. The contrast between the aria and the cabaletta was stunning and such a show of vocal fireworks!

The same could be said for "Una voce poco fa" from the master's Il barbiere di Siviglia. Ms. Collazo's skills with fioritura were matched by the vivacity of her acting. This was one spunky Rosina who would be sure to get her way. Those of you who love zarzuela as much as we do would have been as enchanted as we were by the lively presto of "Carceleras" from Las hijas de Zebedeo. Oh how we would love to see onstage the entire work, of which this is the hit song.

Is there anyone out there unfamiliar with the songs of the early 20th c. composer Maria Greve? Of course you have heard "Jurame" and "Te quiero dijiste" before but probably not as stirringly sung as by Ms. Collazo, who is just as adept at romantic ballads as she is with vocal fireworks.

"Bésame mucho" is another familiar Mexican song, this one by a young 20th c. composer named Consuelo Velásquez. There is so much wonderful music coming out of Mexico that we wondered what they put in their tortillas.

Not to shortchange North American composers, the program was rounded out by "Can't Help Lovin' Dat Man of Mine"  from  Jerome Kern and Oscar Hammerstein's Showboat, the United States' first serious musical. What brought that under the umbrella of powerful women is that it was adapted from a novel by Edna Ferber.

The evening was narrated by Mr. Zinger who is a fount of information about Spanish music, providing anecdotes about the works and the composers. This added a great deal to the evening, especially if you love learning new things as much as we do.

The recital ended far too soon. We had been starved for live music and this was like an exquisite "amuse bouche" whetting our appetite for more.  Shall we call it an "amuse oreille"?