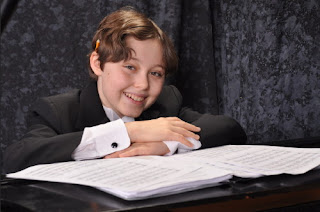 We cut our teeth on the fairy tale Sleeping Beauty and grew up with the Disney motion picture; as an adult we grew to love the ballet with its "rose adagio".  But we never thought we would hear an opera of this touching tale.  Leave it to 13-year-old wunderkind Benjamin Perry Wenzelberg to write one!  Mr. W. is no flash in the pan.  This young man, a Juilliard pre-college student, got his operatic start in the children's chorus at The Metropolitan Opera and is no novice at composing; he also plays several instruments.  Do we have a 21st c. Mozart here?

Last night we had the rare pleasure of hearing a reading of Act I of The Sleeping Beauty, presented by Chelsea Opera, a lively small company that has the wisdom to recognize and foster his rare talent.  Indeed, the concert was presented in memory of Nicholas S. Priore, Esq. and introduced The Nicholas S. Priore New Possibilities Fund (donations accepted). Pending Mr. W.'s orchestration, to be heard next January, the reading was accompanied on the piano by Guest Music Director Lidiya Yankovskaya who tackled the original and captivating score with gusto.

Mr. W.'s music offers what much contemporary operatic writing lacks--it is, most importantly, tuneful.  The vocal writing held our interest from beginning to end and was not only tailored to each individual character but was "singable", likely because Mr. W. has such a strong vocal background.  If we had only heard the embellishments he wrote for Princess Rosamond, convincingly performed by soprano Elisabeth Halliday on the syllable "Ah!" and those he wrote for The Frog, which he himself performed, we would have been convinced of his gifts.  He cites his major influences as Britten, Debussy and the bel canto composers.  As lovers of the bel canto repertory, we confess to hearing that influence most ardently.

Ms. Halliday made a lovely teenaged princess and Mr. W. made a fine frog, leaping onstage and then transforming himself into a prophet, both in gesture and musically.  Another outstanding performance was by dramatic soprano Alexandra LoBianco who used her large steely voice and her acting skills to perform the role of The Evil Wise Woman.  Notable was the menacing music in the piano that accompanied her terrifying aria.  No less wonderful was soprano Anna Noggle who portrayed The Last Wise Woman (otherwise known to balletomanes as The Lilac Fairy) with a moving tenderness, music to match, natch!  Soprano Lara Ryan and baritone Justin Ryan sang the Queen and the King--duets of yearning for the opening, in which a child is wished for, a lovely aria for The Queen along the same lines, and exclamations of joy when her pregnancy is heralded by the Frog/Prophet.

The chorus of eight portrayed the Citizens of the Realm and Mr. W. writes as well for them as he does for the central roles.  His harmonies are interesting, and so are his dissonances.  The opera opens with a heraldic statement of open fifths and we could easily imagine the horns taking that part.  Mr. W. has a mere 6 months to finish orchestrating Act I and we have already marked the date on our calendar--January 17th to be exact.  How exciting it is to be around at the birth of a new work and to watch it grow up!

It will be similarly exciting to watch Mr. W. grow up.  When asked what he will do when his treble voice changes, he replied that someone else will have to sing The Frog!