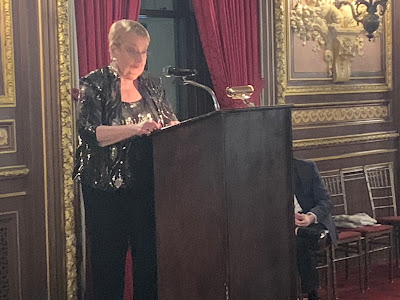 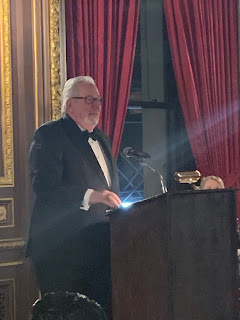 Last night at the Metropolitan Club, Opera Index honored legendary bass-baritone James Morris with a Lifetime Achievement Award--and who would deserve this more than the only Wotan in our memory who showed us the complexities of this character as we needed to see them. Of course, Mr. Morris' biography is an impressive and lengthy one but that is how we wish to remember him. Mr. Morris' "third act" is coaching young artists and we can tell you, Dear Reader, how many young artists have shared with us the incredible value received from his tutelage.

The evening was led by Opera Index President Jane Shaulis who herself had a legendary career and who now does so much to benefit young artists. Speeches were given, toasts were raised, and the room rang with applause. After the lengthy Covid related "intermission" this was a golden opportunity for a gathering of the tribe and we were overjoyed to see so many familiar faces. But let's get to the stellar entertainment! 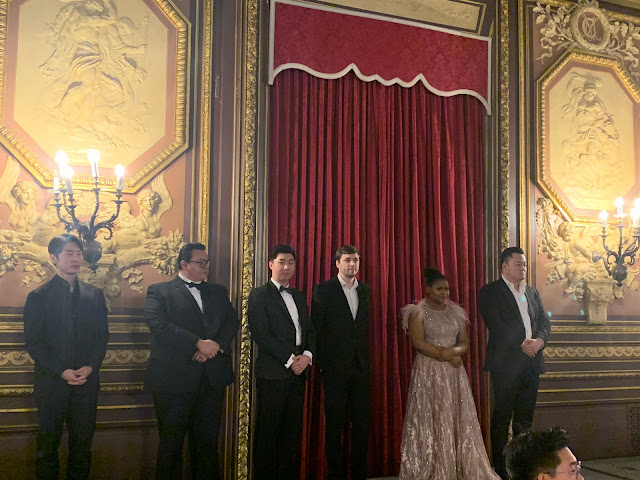 Donghoon Kang, Moises Salazar, Chuanyuan Liu, Vladyslav Buialskyi, Siphokazi Molteno, and Le Bu
From among 350 applicants for the Opera Index awards, 29 finalists were chosen, and 19 winners received $74,500. in prize money provided by foundations and individually sponsored awards. We can only imagine the tough job tackled by the judges to narrow down such a wealth of talent. Guests at the gala were privileged to hear eight of the winners and thankfully, dinner was not served until after the performances. To tell the truth, we felt so satisfied by the entertainment we experienced no need for food. Maybe we should share this information with those who are trying to lose weight. Feed the ears!  Feed the soul!  Not the belly.
Opening the program was magnificent mezzo Maggie Renée who moved around the audience seducing us with a spirited  "Seguidilla" from Bizet's Carmen. It is quite a special gift to combine a rich mezzo tone with technical aplomb and firm dramatic instincts!
Ms. Renée was not the only artist to use the entire space of the room. Ukrainian bass-baritone Vladyslav Buialskyi achieved dramatic realism in his valid portrayal of Figaro in Mozart's Nozze di Figaro, as he opens the fourth wall and addresses the audience in "Aprite un po' quegli occhi". With superb vocalism he created a character in such a sure manner that the entire scene came to mind.
It was surely a night for the bass-baritone and it came as no surprise to learn that Le Bu studies with Mr. Morris. Winner of countless awards, Mr. Bu is firmly stage ready and can look forward to inheriting Mr. Morris' roles. Tackling the moving expression of Procido's patriotism in "O tu Palermo" from Verdi's I vespri siciliani, he got everything right--a stellar performance in every respect.
Since we are now in the midst of celebrating the Lunar New Year, it gave us pleasure to have three Asian artists on the program--and all from different fachs. Chinese countertenor Chuanyuan Liu brought out every subtlety of the fioritura in "Si, la voglio e la ottero" from Händel's Serse. The plot is as elaborate as the fioritura but, truth to tell, we appreciate the latter more than the former, especially when delivered with pinpoint accuracy and fine flexibility as it was by Mr. Liu. What would countertenors do, were it not for Händel and his crazy plots!
We heard more French from South Korean baritone Donghoon Kang who performed "Riez! Allez! Riez du pauvre ideologue" in which Sancho Panza defends his poor confused master in Massenet's Don Quichotte. Mr. Kang effectively employed variation in dynamics and expansive expression to achieve emotional impact--another fine performance.
Yet another admirable actor took the stage in the "Chanson de Kleinzach" from Offenbach's Les Contes d'Hoffman.  Mexican tenor Moises Salazar is quite the storyteller and held us as spellbound as the character does to his audience in the opera. He colored every phrase with such dramatic interest that we almost missed noting the superb vocal qualities of his artistry.
The beautifully textured vocal quality of South African mezzo-soprano Siphokazi Molteno was also accompanied by firm dramatic intent as she portrayed the seductive Dalila in Camille Saint-Saëns'  Samson et Dalila. We have often heard "Mon coeur s'ouvre à ta voix" and indeed, it was our introduction to the Metropolitan Opera with Marilyn Horne as the doomed gypsy. It would be fair to say that in between that performance and Ms. Molteno's we have not enjoyed it as much.
We hear less French opera than we do Italian and were delighted to hear tenor Philippe L'Esperance perform Faust's serenade to Marguerite from Gounod's eponymous opera. Between Ms. Renée, Ms. Molteno, and Mr. L'Esperance we heard a lot of seduction in one night. Mr. L'Esperance's sweet tenor was well employed with some fine phrasing and Gallic style.
We did not get to hear all of the Opera Index winners but we are quite sure that the quality was equivalent. Young talent deserves our backing as well as our appreciation.  We hail the stars of tomorrow!
© meche kroop
Posted by meche at 5:57 AM