SO MUCH TALENT! SO LITTLE TIME! 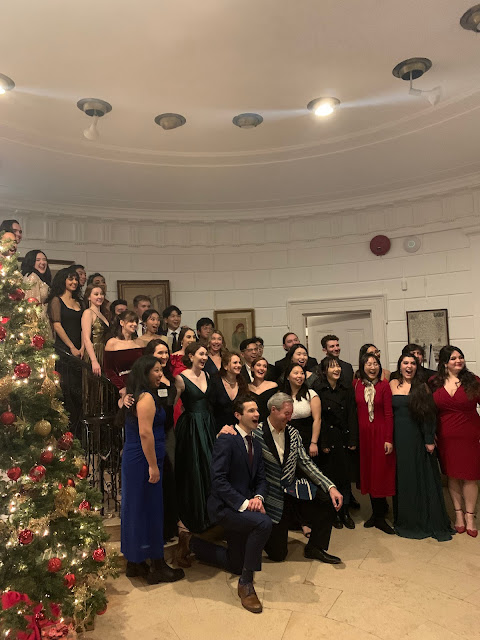 An hour wasn't nearly long enough to spend with the participants of Classic Lyric Arts, an ever-growing academy of opera that makes use of total immersion summer courses in Italy, France, and lately The Berkshires to hone the skills of young emerging artists of opera and piano. Over the past few years we have delighted in the growth of the young artists as well as the growth of the foundation, helmed by Artistic Director Glenn Morton, well known as a beloved teacher and coach at all three New York City conservatories.

We will not go on and on about the merits of the training program but rather prefer to address the results which we enjoyed in one too-short hour. The evening began with a four-handed piano introduction. What could be more spirited than the overture to Mozart's Cosi fan tutte performed by the four hands of Billie Miller and Hannah Comia!

This led right into the charming Act I scene of this opera in which Ferrando and Guglielmo are interacting with the older wiser Don Alfonso. Tenor Bradyn Debysingh used his bright flexible tenor to create the character of Ferrando whilst Kevin Jasaitis' generous baritone joined in as Guglielmo.  And who should appear as Don Alfonso?  None other than the promising Christopher Lau whom we just heard as Giove in the Mannes production of La Calisto. Low voices like his take a bit longer to mature but we can already foresee a fine future for him.

Mascagni's L'amico Fritz is not performed as often as it should be and the charming scene between Fritz and Suzel --"Suzel, buon di" was brought to life by the equally charming soprano Maia Sumanaweera and her courtly Fritz, sung by Samuel Ng. They evinced a lovely shy interaction with plenty of romantic undertones.

After all that excellent Italian diction, we were ready to hear the fine French of Charlotte Bagwell as Ophelia, and Wesley Diener as Hamlet in "Doute la lumière" from Ambroise Thomas' eponymous opera.  Ms. Bagwell successfully conveyed Ophelia's innocence whilst Mr. Diener created a nuanced portrait of the conflicted Hamlet.

Doohyun Yoon's full tenor was employed with subtle dynamics in "Non piangere Liu" from Puccini's Turandot. It is courageous for a young singer to tackle an aria that is so famous, so beloved, and so often heard sung by great voices.  Mr. Yoon never shrank from the challenge and delivered a fine performance.

We love Bellini for his long lines and consider them a challenge for young singers. What a pleasure to hear soprano Jihye Seo as the eponymous Norma and mezzo soprano Monique Galvâo do justice to "Mira o Norma". The harmonies were exquisite and the astute dynamic variety made the most of this glorious duet.

Composer Jake Landau shared his composition "Mary's Song", setting a text by Marion Angus which was sung by Johanna Will. The piano writing struck us as dynamic and colorful.

The forbidden love of Nadir and the Hindu priestess Leila in "Ton coeur n'a pas compris le mien" from Bizet's Les pêcheurs de perles was expressed by soprano Julianne Casey and Mr. Debysingh;  in this tender duet  the two begin tentatively distanced and gradually move closer as emotions are given their due. The French was excellent and gave evidence of some fine coaching, for which CLA is known.

Der Rosenkavalier is one of our favorite operas and the trio of The Marschallin, Octavian, and Sophie is one of the grandest numbers in the operatic canon. What a treat to hear three young women perform it so splendidly-- soprano Hannah Cho as the gracious Marschallin, Ms. Sumanaweera as the innocent Sophie, and mezzo-soprano Arianna Paz as the bewildered and ambivalent Octavian. Xu Cheng made a special contribution at the piano, replacing Strauss' demanding but lavish orchestration.

In the scene from Offenbach's Les Contes d'Hoffmann ("Chère Enfant), we almost missed the marvelous vocalism, captivated as we were by Henry Griffin's mesmerizing.  maliciousness as Dr. Miracle. Soprano Sara Mortensen made an affecting Antonia, the sickly singer who would lose her life when driven to sing by Dr. Miracle's conjuring of her dead mother, played by Emily Gehman. What a splendid trio!

The entertainment was brought to a close by an ensemble singing "C'est la fiesta bohémienne" from an operetta by Lopez called La belle de Cadix. We have never even heard of this mid-20th c. operetta and may never get to see the entire work but we certainly did enjoy this rousing finale to such a delightful hour spent with these up-and-coming young artists.

We heard so much potential, so much evidence of hard work and dedication. Not all of these young artists will become stars, since talent and hard work are not enough; luck, grim determination, and good management also play a part. However, we are pleased to note the impressive success already achieved on the world stage by graduates of the CLA program.

Every year, one of the graduates gets to give a brief talk about how these summer programs have affected their artistic development. This year it was Ms. Galvão who shared her experience of cultural immersion in France, giving a joyful picture of exposure to culture as well as language.

May CLA continue to thrive and grow! May financial support increase! May a new crop of young artists get to participate in this valuable experience!