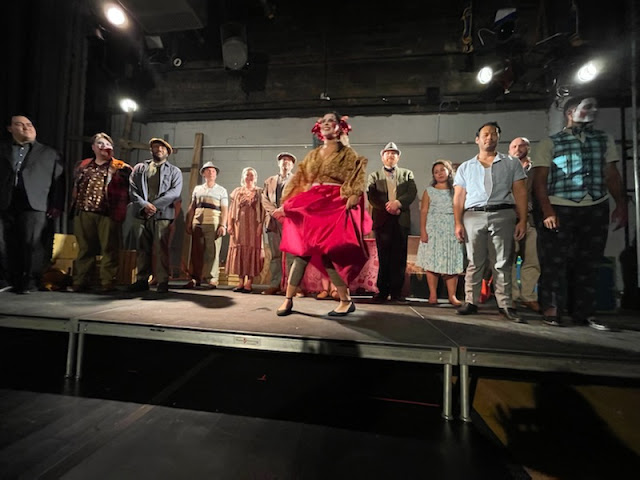 Cav&Pag by New Camerata Opera
(Photo by Michelle Rofrano)
We confess we had our trepidations about traveling to the depths of Brooklyn to see a mashup of Pietro Mascagni's Cavalleria Rusticana and Ruggero Leoncavallo's Pagliacci. These two operas are most often presented in a double bill, an evening which we have always found satisfying. Both operas take place in small Italian villages and give us a glimpse of what life was like in the late 19th c. Both deal with similar themes of adultery and its consequences in the lives of ordinary people--a period in opera known as realismo.
If that epoch manifested a certain code of honor that is unknown today in civilized countries, our epoch is no stranger to toxic masculinity, abused women, adultery, and revenge. The idea of combining these two operas is not really that farfetched since the music of both composers is written in the same style and the characters are subject to the same passions.  But how to combine them is the question.
We imagine it took a great deal of effort on the part of Director John de los Santos, Music Director Samuel McCoy, and Dramaturg Cori Ellison to weave the two stories into a seamless whole.  The effort paid off and we were rewarded with a gripping evening of entertainment without any "spoon-feeding" to force us into seeing parallels with current social mores; we are left to do our own thinking about the consequences of our behavior.
The director set the story in a small Sicilian village called Poggioreale following the devastating earthquake of 1968. The stage is littered with debris and the citizens are cleaning up the mess. Of course, this cannot fail to remind us of the upheaval in our own lives caused by Covid. It is tempting to think that chaos contributes to peoples' bad behavior. We leave this to you, dear reader, to decide for yourselves.
The singing was excellent with Megan Nielson's lustrous soprano bringing to life the misery of Santuzza, seduced and abandoned by Turridu, played by tenor Steven Wallace as a feckless fellow who flits from woman to woman. In the opera he has fallen for the married Lola (well sung by Eva Parr) and ditched Santuzza. Mamma Lucia was well played by mezzo-soprano Leslie Middlebrook who managed the transition from hostility to sympathy for her son's discarded mistress.
The acting was believable with Ms. Nielson growing in dramatic stature as the story evolved and Mr. Wallace playing a narcissist to the hilt. But the most convincing acting was that of baritone Costas Tsourakis who not only has a superb voice but also impressive acting chops. He had us literally trembling in fear when his Alfio accosts Turiddu. This is opera up close and personal if ever we experienced it.
The role of Canio was played by tenor Erik Bagger who evoked both sympathy (as a victim of his partner's infidelity) and horror equally, as he does what you all know he does. To watch him decompensate as he watches his faithless wife onstage enacting the equivalently faithless Columbine was wrenching.
Soprano Samina Aslam made a fine Nedda and we particularly enjoyed her slapstick performance as Columbine. An unexpected brilliant performance by a singer formerly unknown to us is a special treat and the size of the role, as you know, means nothing. Rashard Deleston has a sweet plangent tenor which he employed beautifully when Arlecchino serenades Columbine.
The role of Nedda's lover Silvio was persuasively performed by Angky Budiardjono who employed his beautiful baritone instrument to create a most importuning lover, one that would be difficult to resist.
The vengeful Tonio was effectively played by Stan Lacy as a character for whom one feels no sympathy. It is he who sets the tragedy in motion. No one likes a tattletale. Similarly Santuzza is not rewarded by Alfio when she blows the whistle on his errant wife.  The two stories echo each other in a manner that provokes thought.
The townspeople operated as the chorus of onlookers at the traveling show and were effective as a unit and also as individuals reacting to the events.
Director John de los Santos kept the action moving at a lively clip. A bit of comic relief is always welcome in a tragedy and the rubber chicken that Columbine was about to cook found its way into Tonio's pants in a "cock"adoodledoo maneuver that we have never seen before. He utilized the aisles as well as the stage giving the audience a surround sound experience.
Music Director Samuel McCoy was in full command of his reduced orchestra comprising a string quartet augmented by a particularly eloquent string bass, a flute, an oboe, and keyboard. All of the themes were elucidated and one had the impression of a much larger ensemble. We loved the flute's birdsong which inspires Nedda's aria "Stridono Lassu".
Dramaturg Cori Ellison wove the two stories together successfully, inventing some recitativi and dialogue that seemed integral.
Asa Benally's costumes amounted to mid 20th c. streetwear with the shamed Santuzza in black and the flirtatious Lola in a bright dress. Notable were the commedia dell'arte costumes for Columbina and Arlecchino which were adorably silly.
Emily Clarkson's lighting was effective in calling attention to the dramatic moments.
We had a wonderful time and you will too. There will be three more performances and a second cast which promises to be just as good as this one. The venue is a short walk from a stop on the L train and is actually a circus school--a spacious establishment that lent itself well to the performance.
© meche kroop
Posted by meche at 7:22 AM