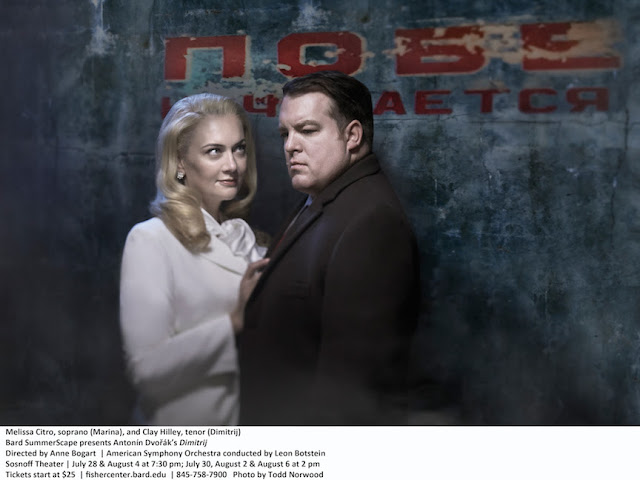 It is the Time of Troubles in Russia--the interregnum between the death of Ivan the Terrible and the establishment of the Romanov Dynasty--at the turn of the 17th c.  One would never know this from the staging of Dvorak's nearly forgotten opera Dimitrij, taking place in the magnificent Fisher Center of Bard College, as part of the annual Bard Summerscape.

The singers sport contemporary attire and the only clue that we are in Russia is the writing on the rear wall of the set which, according to our best source, means "Victory Begins Here". But Director Anne Bogart (significantly, an alumna of Bard College) has written in her program notes that she was thinking of the unsettled time following the dismantling of the Berlin Wall. We would have greatly preferred to experience this story the way Dvorak and librettist Marie Cervinkova-Riegrova intended and to figure out the resonances on our own without being spoon fed.  Frankly, art requires no explanation.  If one needs program notes to explain your thinking, you have failed.

Fortunately, the musical values were exemplary and there was no failure on the part of the American Symphony Orchestra under the baton of Maestro Leon Botstein, who is famous for championing forgotten works.

To see one of Dvorak's ten operas, composed two decades before his famous Rusalka, was a rare opportunity, well worth the six plus hours on a bus. We were not so sure during the overture when the gorgeous music was not trusted but was accompanied by a child running around in circles.  Nor were we terribly thrilled during the static first act which did offer some superb choral writing and served to introduce the characters and their supporters.

Dimitrij arrives with his Polish wife, the noblewoman Marina, and an occupying Polish army intent on getting him on the Russian throne. On the other side we have the boyar Shuisky and Basmanov, followers of Boris Godunov, the death of whom has left the country in a state of chaos. Godunov's daughter Xenia is under the protection of Shuisky. For Dimitrij to access the throne he must be accepted by the widow of Ivan the Terrible, the Tsarina Marfa.

It was not until the successive acts that we were able to appreciate the gifts of the singers. We were thrilled to hear some fine arias and duets that were well worth a second hearing.

As the eponymous Dimitrij, tenor Clay Hilley demonstrated a strong and clear tenor sound which appeared to be well suited to the heldentenor fach. His dramatic chops were equally sound and he generated sympathy for the character who, according to this version (playing fast and loose with history as opera often does) is unaware that he is not the son of Ivan the Terrible.  Indeed, in this version, he is the son of a peasant who has been raised to believe he is who he claims to be.  This makes it easy for us to sympathize with him.

Soprano Melissa Citro made a beautiful and hateful Marina. Her ample soprano has a steel core and her acting was convincing.  She is sufficiently beautiful to convince us that she would capture Dimitrij's love whilst her portrayal of self-interest, arrogance, and jealous rage were so believable that we were happy to see her dispatched. She behaved in such a way as to alienate the Russian people by refusing to accept the Orthodox faith in favor of her native Catholicism. We hope to see this splendid soprano soon in one of her several Ring Cycles.

As Xenia, soprano Olga Tolkmit used her somewhat smaller but highly focused instrument to convey the ambivalence her character must feel when wooed by the new tsar, who has just turned away from his narcissistic wife. Her petite stature and vocal colors contributed to her vulnerability; her death, ordered by the vengeful Marina, was a terribly tragic moment.

Mezzo-soprano Nora Sourouzian made a marvelous Marfa. Her voice is rich and dense with coloration and she totally convinced us of her inner struggle. She knows that Dimitrij is not her son but she believes his ascension to the throne will be good for Russia and publicly recognizes him as her offspring.  It is only at the end when the Patriarch (played by Peixin Chen with booming bass and imposing stature) asks her to swear on the cross that she collapses in fear of damnation.

We were completely satisfied as well with the performances of baritone Levi Hernandez as Shuisky and bass-baritone Joseph Barron as Basmanov. Under the direction of James Bagwell, the chorus was also fine. We could not have imagined better casting or a better realization of Dvorak's magnificent score. We believe this is the first time the opera has been performed fully staged in the United States.

We only wish the production team had given it a more Russian look and one that was authentic to the period. David Zinn's set was peculiar, looking like a recreation hall in a church. It had to serve as the gates of Moscow, the Kremlin, the tombs, Shuisky's house, and Dimitrij's lodging. The lackluster setting was helped by Brian H. Scott's evocative lighting.

As far as Constance Hoffman's costume design, if she had been told to create costumes of contemporary casual she succeeded, but it appeared as if the cast were told to rummage through their closet for any old thing.  No praise there!

The men just wore suits and ties, making it difficult to tell one from the other without opera glasses.  Only the Patriarch was appropriately costumed, looking just as one might have imagined. Marina's wedding costume went beyond casual contemporary but was neither flattering nor appropriate.

We were grateful that the opera was performed in Czech and loved the way the vocal lines parallelled the sound of the speech. Language coach was Veronique Firkusny. There will be a few additional performances and the opportunity to hear this opera is worth the trip.

We will close with an interesting tidbit reminiscent of the "flap of a butterfly's wing" theory.  The terrible famine in Russia in the early 17th c. which added so greatly to the country's turmoil, was attributed to a climate change wrought by the eruption of a volcano in Peru!