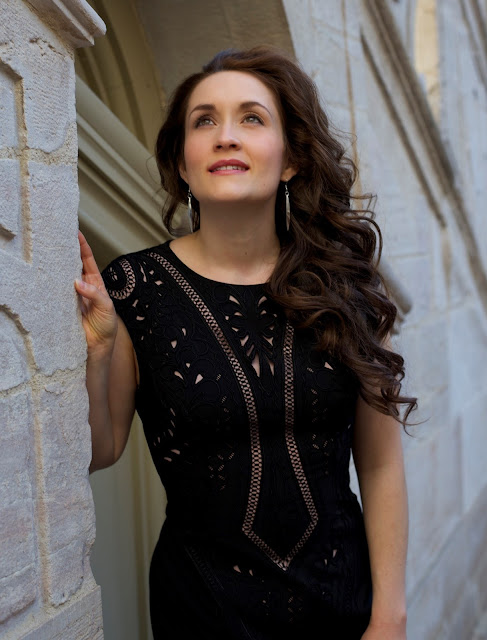 We can still recall the first time we heard soprano Erin Morley in recital (just before we started writing about singers) and we were blown away by the purity of her voice and the warmth of her connection with the material and the audience.  Every time we have heard her we have been increasingly impressed.  Her groundbreaking performance at the Santa Fe Opera in the role of the eponymous "Rossignol" of Stravinsky's opera has led to our calling her by that name.

But we also recall with pleasure hearing her as Adellina Vocedoro-Gambalunghi in Mozart's Der Schauspieldirektor, her "Marten alle Arten" at a Richard Tucker celebration, and also delivering fireworks in some Mozart concert arias at a Mostly Mozart night. And also singing a duet with Isabel Leonard on a beastly hot night in Central Park--"Oh, belle nuit" from Offenbach's Les Contes d'Hoffman.

It was Olympia's aria from that same opera--"Les oiseaux dans la charmille"-- that knocked our socks off last night at the 19th annual Alice Tully Vocal Arts Recital.  It was her first encore; her coloratura fireworks and charming dramatic skills brought the cheering audience at Alice Tully Hall to their collective feet for a prolonged and well deserved standing ovation.  Those skips and those trills left no doubt that Ms. Morley is a MAJOR talent and a splendid choice to receive this award.

A true Juilliard daughter, she earned her Masters Degree there and her Artists Diploma as well. The Lindemann Program and a number of prestigious awards brought her to the attention of the opera world and has resulted in worldwide fame.

Working in perfect sync with the highly esteemed collaborative pianist Ken Noda, Ms. Morley planned a most unusual program based on different types of love. Instead of arranging the program by composer, she devoted each set to a different stage of love. Schubert's "Lied der Delphine" expresses unthinking adolescent infatuation in a charming fashion.

If the section on motherly love was particularly lovely, we attribute it to the fact that Ms. Morley has an adorable youngster (we can attest to this as her family joined her in Santa Fe when we reviewed her performances) and another on the way.  Dvorak's profound tribute to what passes from mother to daughter--"Songs My Mother Taught Me"-- was sung in Czech with Mr. Noda's piano contributing a Bohemian flavor.

Her delivery of Rachmaninoff's "Margaritki" allowed us to appreciate the symbolism of daisies as little girls, something that somehow had escaped our imagination heretofore. Mr. Noda's trills added to the vocal thrills. Especially symbolic (of pregnancy) was Schumann's "Der Himmel hat eine Trane geweint"; we may never hear those two songs the same way again. Ms. Morley's interpretation opened our ears and our heart--what all fine artistry should do!

For sheer pleasure we would exalt Strauss' "Amor". Ms. Morley's crystalline coloratura seems made for Strauss and, indeed, she will be heard at the Met as Sophie in Der Rosenkavalier. Her high notes soar into the stratosphere and the embellishments are always incredibly exciting. Her rapport with the audience grew as she related how she identifies her child with the rascal Amor.

Unrequited love was explored in the next set, limning various ways a woman reacts to betrayal. We have always responded to Hugo Wolf's "Das verlassene Magdlein", a very sad song about a young woman just going through the motions of getting through another day. For the first time we noticed that during the piano interlude, when the subject recalls her dream of the prior night, the piano flips to major for a couple seconds. It was such a poignant moment.

Mozart's "Als Luise die Briefe ihres ungetreuen Liebhabers verbrannte" is yet another favorite. In this song, the spunky heroine tries to extinguish the fire within by burning the man's love letters. All the passion and resolve were heard in Mozart's marvelous vocal line.

The grief of losing a love to death was the subject of the next set.  Our favorite here was Edvard Grieg's "Zur Rosenzeit", another instance where the symbolism became clearer for us. Goethe's text scans and rhymes magnificently and Ms. Morley sang it sensitively.

A set of songs on sacred love closed the recital. Ms. Morley has some happy memories of singing in the Salt Lake Children's Choir and gave pride of place to the song "Little Lamb", a setting of a William Blake text by choir director Ralph B. Woodward. This is a simple melody and Ms. Morley can handle simplicity just as well as fireworks. As a surprising bonus, every word was clear and we hardly ever find that in sung English.

We loved the intensity of Tchaikovsky's "Whether Day Dawns" and Mr. Noda's piano was powerful throughout, lending gravitas. But it was the final song by Strauss that we loved the most--the well known "Zueignung" sung with deep feeling and impressive artistry.

The recital did credit to Ms. Morley, to Mr. Noda and to Juilliard, from whence so much artistry emanates.