THE DUDE OPENS THE SEASON AT CARNEGIE 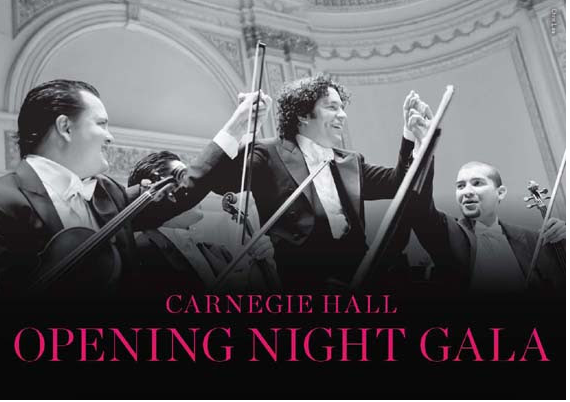 Opening night at Carnegie Hall!  What better choice could there have been than the Simón Bolívar Symphony Orchestra of Venezuela, led by the youthful and exciting Gustavo Dudamel. He electrified the audience with his conducting and charmed them later with his brief speech about the unifying power of music.

Venezuela's forty plus years of supporting El Sistema has resulted in the SBSOV, in which an astonishing 70% of the musicians have grown up with the orchestra, starting as children a couple decades earlier. The fostering of young musicians is now spreading worldwide. New York City unfortunately lost Maestro Dudamel to Los Angeles where he has created the Youth Orchestra Los Angeles. Our loss, their gain.

The musicians of SBSOV clearly play because they love music, and they play brilliantly because they love Maestro Dudamel. His choice of program was unusual in that both major works began life as ballets. We know Ravel's La Valse as the ballet Balanchine created for New York City Ballet in 1950 and which reappears every few years.

This is the first time we have heard it performed as a concert piece. Ravel often denied that the piece reflects post-WWI cultural collapse; the listener should feel free to experience the piece on its own terms. We experienced it as disturbing with a sense of unease; it began with some rumbling in the double basses joined by portentous kettle drums.

There are some lovely intervals in which the harp seems to recall a gentler epoch but there are frequent incursions of anxiety. The piece ends with a clash of cymbals. We think of it as a waltz on steroids. The Russian impresario Diaghilev commissioned the work as a poème choréographique but then refused to choreograph it. Ravel never forgave him.

Consequently, in the 1920's it remained as a concert piece until Bronislava Nijinska choreographed it in 1929; we were unable to find a filmed version of it. The Balanchine version however remains stuck in our memory and invaded our mind's eye while listening to Dudamel's astute evocation of Ravel's brilliant orchestration.

However, we were able to locate a number of YouTube films of the second piece on the program--Stravinsky's ballet Le sacre du printemps. Of course the sound of SBSOV could not have been duplicated but we were interested in seeing what Diaghilev had in mind when he commissioned the work from the young as-yet-unknown Igor Stravinsky.

There is a wonderful YouTube of the Joffrey Ballet's re-creation of the original Nijinsky choreography which we recommend to readers. Fans of the artist Nicholas Roerich (anyone who has visited the eponymous museum on the Upper West Side may fall into that category) will thrill to his sets and costumes.

Composers have been known to later deny anything programmatic about their work. Again, it is up to you, the listener, to use your own imagination. This was a seminal early 20th c. work and music would never be the same afterward. It is not much of a stretch to form an analogy with WWI, after which the world would never be the same.

The work caused a riot at its premiere in 1913 and one wonders whether it was the music or the dancing!  The music is propulsive with radical rhythmic variety and orchestral coloring which M. Dudamel captured at full speed.

We don't generally think of the bassoon as an instrument of melody but that is just one of the radical choices made by Stravinsky as he used just that ploy to begin the piece; it is a mysterious theme that recurs under different colors throughout the work.  There is vigor and cacophony to spare and colorations not heard anywhere else. Sometimes the music scampers and sometimes in insinuates.  There are prolonged silences in which one holds one's breath.

The piece ends with a rising motif in the flute as the sacrificial maiden dances herself to death--at least that's what happens in the ballet. The music has also been used by Maurice Béjart in a more abstract ballet.

The daring M. Dudamel delighted the audience by closing with a number of selections from around the world in 2/4 time, maintaining the theme of dance music. We heard a lively Hungarian Rhapsody by Brahms with alternating sections of forcefulness and lyricism, a selection from Copland's Rodeo with syncopated percussive elements, the Trisch Trasch Polka by Johann Strauss, the rousing "Malambo" from Ginastera's ballet suite Estancia, and finally the "Mambo" from Leonard Bernstein's West Side Story.

But the evening wasn't over yet.  There was an encore the name of which we did not catch, but it will remain in our memory as Concerto for Maracas and Orchestra.  The featured young percussionist drew sounds from those Latin American percussion instruments that we could never have imagined.