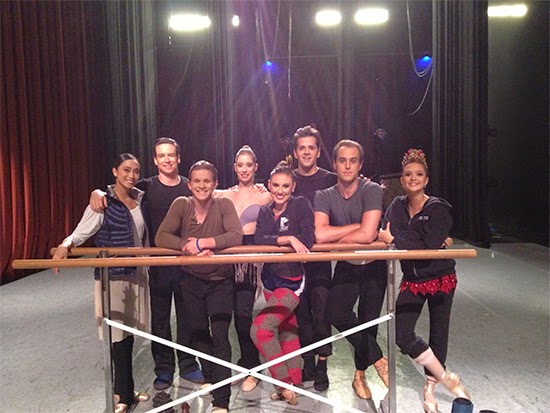 It's only been a half-dozen years since Daniel Ulbricht, principal dancer of the New York City Ballet, founded a small touring company comprising predominantly principals and soloists from NYCB.  This impressive company was brought to Santa Fe by Performance Santa Fe for two performances.  Last night's program was filled with artistry and athleticism and tonight's program promises to be equivalent or maybe even better.  If you are fortunate enough to snag tickets you are in for a treat.

We will not tell you which dancers are principals, which are soloists and which belong to the corps de ballet because each one was superb in his or her own way.  We have enjoyed these fine dancers in New York City but we enjoyed them even more in the relatively small Lensic Theater.  There is nothing like being up close and personal; thus we were quite willing to sacrifice the presence of a live orchestra.

Because of our predilection for the classical in all things, let us begin with the sensational Odette/Prince Siegfried adagio duet from Act II of Tchaikovsky's Swan Lake, choreographed by Balanchine, after Ivanov. Teresa Reichlen has the perfect body for classical ballet with beautiful long legs, arched feet, long slender neck, flexible back and a soft porte de bras.  We loved the way she fell back into the waiting arms of her Prince, Ask la Cour, always a fine partner.

The Black Swan Pas de Deux from Act III was performed in the Petipa choreography by Tiler Peck and Robert Fairchild.  Ms. Peck has a more athletic body and was perfectly centered for the famous fouettes.  (Thirty-two but who's counting?)  While Odette is gentle and sad, Odile is conniving and seductive.  It is challenging to let the audience in on this while convincing Siegfried that she is Odette, calling to mind Odette's avian qualities. Mr. Fairchild also makes a fine partner and excelled in his variation.  There was a rather confusing mix and match of dancers for the variations but no one seemed to mind.

Another classical piece we loved was Opus 19. Andante which the talented young choreographer Emery LeCrone created to music by Rachmaninoff.  The work was classical, very evocative and was perfectly danced by Emily Kitka and Russell Janzen.  It is admirable that the company is giving a chance to young choreographers.  We are always delighted to see a piece by Ms. LeCrone, a fine dancer in her own right.

Along different lines, Mr. Ulbricht himself performed the world premiere of an unnamed work choreographed by Justin Allen to music by Rodrigo y Gabriela.  His remarkable athleticism evoked some wildly enthusiastic applause by thrilled members of the audience and we were among them. The work fit him so well it appeared that he himself had choreographed it.

Balanchine's Who Cares? to music by Gershwin, adapted and orchestrated by Hershey Kay, gave everyone a chance to show off Balanchine's quirky and jazzy additions to the classical vocabulary.  We always enjoy the adorable Megan Fairchild who performed a lovely solo to "My One and Only".  The entire cast dazzled in the final number "I Got Rhythm".

After the performance, the audience was invited to come down to the stage for a "meet and greet" with the artists.  Now THAT'S something that doesn't happen in the Big Apple!