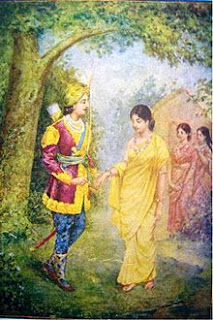 It is likely that few of us have ever heard Franco Alfano's 1921 Sakùntala, although there are a couple recordings extant.  Likewise, you will probably not get an opportunity in the future.  But thanks to Duane D. Printz, Founding Executive and Artistic Director of Teatro Grattacielo, a significant number of us opera fanatics got the chance to hear it last night in concert version at the Skirball Center of NYU.  And concert version was definitely the way to go, since Mr. Alfano's libretto, based on a 4th c. Sanskrit play, is rather silly by 21st c. standards, and lacking in dramatic action.  A King, while on a hunt, runs into the beautiful protectress of a hermitage, the eponymous heroine.  He falls in love with her, woos her, marries her, impregnates her and then abandons her.  She is too depressed to fulfill her duties and is cursed by an old priest, so that when she takes herself to court her husband fails to recognize her and she drowns herself.  Those early 20th c. heroines lacked our 21st c. self-preservation skills that has us gals just writing off the bums and moving on!

OK, the plot is scanty but oh, the music!  Gorgeous shimmering textures are used to convey the exoticism of the locale and Maestro Israel Gursky conducted the massive orchestral forces at his disposal with great aplomb.  But these massive orchestral forces tended occasionally to overwhelm the singers who at times struggled to be heard; this lead to an occasional forced sound, especially in the upper registers, particularly at moments of maximum emotionalism.  Tenor Raul Melo did his best to rise above the huge waves of sound but sometimes sank below the waves.  The high tessitura likewise offered challenges to soprano Michelle Johnson in the titular role, leaving scant room for the subtlety and variety of color of which she is capable.

Sakùntala's friends were sung by soprano Asako Tamura and mezzo-soprano Shirin Eskandani whose rich voice provided the biggest thrills of the evening, not to mention applause that sounded as loud as the orchestra.  It appeared that the lower voices succeeded better in every case.  Three basses handled their vocal duties well: Ashraf Sewailam in the role of the priest Durvasas , Damian Savarino as Harita, one of the ascetics and Young Bok Kim as Sakùntala's father.  Baritone Peter Kendall Clark distinguished himself as the King's Equerry.  Tenor Kirk Dougherty sang the role of the young hermit who seemed to be the sidekick of Harita.

We overheard a few members of the audience saying that they refused to follow the libretto, which had been beautifully translated by Ms. Printz herself, and just closed their eyes and listened to the glorious music. One audience member has both recordings of the opera and counts it as a masterpiece of realismo. That the opera was produced on the radio comes as no surprise.  We were grateful to have an opportunity to hear this rarity.