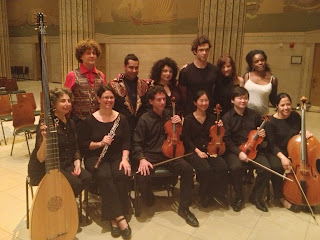 We wonder what to call an original event synthesizing mythology, music and history;  we will just call it "wonderful".  When the multi-talented Gould Gals come up with an idea for one of their Salon/Sanctuary Concerts we just know it will be thoroughly researched, well-cast, effectively produced, enlightening and always entertaining.  Last night's event at the Broad Street Ballroom was all of the above.

The premise for The Heirs of Tantalus was that some of the more lurid events of Ancient Roman history bore interesting parallels with Greek mythology (leading one to wonder whether our own culture re-enacts the myths of our own past.)  Specifically Nero's murder of Agrippina paralleled Orestes' murder of his mother Clytemnestra in The Oresteia.  There are still parts of the world where revenge and retaliation take precedence over rationality; the work is highly relevant.

Musical research by Jessica Gould was responsible for some fine selections from works by baroque composers--mostly from Handel's Agrippina and Monteverdi's  L'Incoronazione di Poppea.  Ms. Gould herself employed her generous soprano in  solos and in some fine duets with countertenor José Lemos.  We particularly enjoyed the stunning harmonies in the duet "Pur ti miro" from L'Incoronazione di Poppea.

Narration and dramatic readings from Suetonius, Aeschylus and Euripides were adapted by Erica Gould and spoken by fine actors Steven Rattazzi and Ethan Peck, both of whom hit exactly the right tone.  Female roles were portrayed by Rosalyn Coleman Williams who seemed to overact to some extent.  The wonderful resonance of the performing space made the amplification of the actors seem unnecessary and unwelcome.

Stage direction by Erica Gould was interesting but also led to much swiveling around in the chairs to see who was speaking at the rear of the audience space.  Fortunately, the singing took place on an elevated stage which also held the ravishingly talented musicians--The Sebastians Chamber Players, conducted from the harpsichord by Jory Vinikour.  We enjoyed the fine playing of Deborah Fox on the theorbo.

Costumes by Lara de Bruijn were effective, as was lighting by Alexis Caldwell.  It was a stimulating evening and sent us out into the night with many thoughts about the mythology of our own cultural past (The Wild West, the gunslinger, the resourceful pioneer) and how that influences our present day politics.  Many thanks to the Gould Gals!