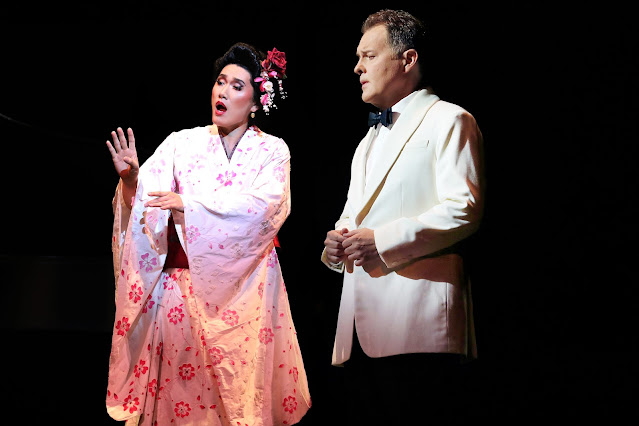 Kangmin Justin Kim and Mark Stone
(photo by Curtis Brown)
With our eyes closed, we might have thought the scintillating voice was that of a soprano; but no, it was the scintillating voice of counter-tenor Kangmin Justin Kim whose expressive instrument and superb control of the upper register was absolutely perfect for the role of Chinese opera star Song Liling. The opera M. Butterfly, commisioned by the Santa Fe Opera, is about deception, among other things. We humans are inclined to deceive ourselves based upon our wishes, our experience, and our preconceived notions. M. Butterfly tells the story of a minor French diplomat who falls in love with a male Chinese opera star who portrays female roles. Until confronted with the "naked evidence" the diplomat never accepts the fact that he has fallen in love with a man--not even after a years-long relationship.
The story originated as a play by David Henry Hwang whose tales of China have entertained us going back to his play The Dance and the Railroad. The play M. Butterfly upon which the opera is based, was a huge success at its Broadway premiere and once again at its revival and then again as a film. We have enjoyed every iteration and was looking forward to the opera ever since it was announced.
So, we are wondering why, in spite of some dazzling performances, we were somewhat disappointed in the opera. To cut to the chase, the story worked just fine as a play.  The play did not yearn for music, not even the fine music of Huang Ruo. The references to Puccini's Madama Butterfly, scattered throughout the score, only served to point out the superiority of Puccini's vocal lines. Mr. Ruo's instrumental writing is eclectic and interesting, but the vocal lines were not. This complaint of ours is not unique to Mr. Ruo. Most contemporary operas seem to have the same deficiency.
Although Mr. Hwang and Mr. Ruo have worked together before, we did not feel the union of libretto and music that we hoped for. The "recitative" (95% of the opera) was declamatory, prosy, and repetitive. The nail was hammered so hard it went right through the wood! Is it not taught to dramatists to "show, don't tell"? There were a couple arias in Act III that allowed the artists to show their stuff but were not at all melodic.
Perhaps we were alone in our assessment because there was a standing ovation at the conclusion; however we believe the thunderous applause was meant for the performances. Baritone Mark Stone sang the role of the duped accountant/diplomat René Gallimard with fine rich tone whilst creating a sympathetic and believable portrayal.
Mr. Kim's lustrous counter-tenor added to his consummate acting skills. We can see how Mr. Gallimard was fooled! All of the gestures and movements were as feminine as one could imagine and, at the end, when he appeared as a man (in full frontal glory) it came as a shock, even though we knew the artist was male.
This kind of gender fluidity is far less shocking than it was some decades ago and we do admire Mr. Hwang and Mr. Ruo for tackling issues of racial, cultural, and gender stereotypes, along with the issue of cultural misunderstanding.  The references to Puccini's opera serve to remind us how many changes have occurred in the past century.
Let us return to the quality of the performances and the production. We particularly enjoyed hearing mezzo-soprano Hongni Wu as Song Liling's communist "handler" who set the espionage in motion. We always feel great to see Asian artists cast in Asian roles, although there are other opera lovers who think it doesn't matter.
Tenor Joshua Dennis (a former apprentice) livened things up as Mr. Gallimard's tennis-playing childhood friend, appearing as a memory. Bass Kevin Burdette was fine as the somewhat arrogant French ambassador to China who promotes Mr. Gallimard, seems to admire his acquisition of a Chinese mistress, and then sends him back to France.
Adding greatly to the production was the choreography of Seán Curran who managed to combine communist tropes with the movements we have seen in Chinese opera, an art form we particularly enjoy.
Maestro Carolyn Kuan led the orchestra with a firm hand; our only regret was that more Chinese instruments were not employed. We liked the way she brought out the references to Puccini's Madama Butterfly.
Once more, we admired Chorus Master Susanne Sheston for creating a behind the scenes choral rendition of Mr Ruo's very own "Humming Chorus". The apprentices sounded great there and also as they portrayed members of French society in several scenes--as bored expats living in China, and as French citizens laughing at Mr. Gallimard's benightedness.
Director James Robinson kept the action moving along and Allen Moyer's set design was superb, especially Ms. Liling's sexy red boudoir. Christopher Akerlind's lighting made an impressive addition. James Schuette's costumes were right on point. Even the projections of Greg Emetaz were fine since they contributed location information instead of the distractions produced by other projection designers that we have found annoying.
In sum, Santa Fe Opera can be commended for commissioning a provocative and original work and for giving it a first-rate production. It is just our personal taste that wanted a more memorable vocal line and a more poetic libretto. Still, it was an interesting evening in term of getting us to think about the issues mentioned earlier. But for sheer auditory pleasure and a climax that leaves us shaken, we will choose Puccini.
© meche kroop
meche at 6:30 AM
Share