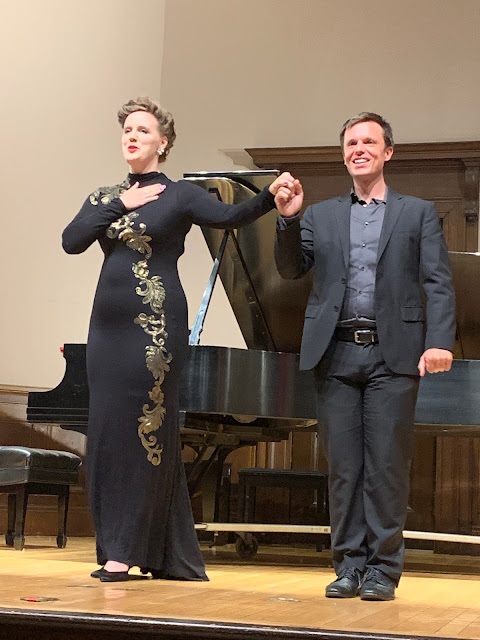 Rebecca Ringle Kamarei and Bryan Wagorn
The fascinating evening presented last night at the Italian Academy by Aspect Chamber Music examined the life and art song output of Alma Mahler, wife of composer and conductor Gustav Mahler. The worthwhile approach of Aspect Chamber Music is to include not only performance but also  information and imagery, making the evening stimulating as well as interesting.
We were not unaware of the "scandalous" exploits of this captivating woman but brief illustrated talks by musicologist Nicholas Chong contributed a great deal to our understanding and appreciation. We are familiar with sapiosexuality but we don't know the term for someone attracted to artistic gifts. Alma had a constant stream of lovers and husbands, all of whom were famous in their fields and considerably older than she. Both she and Gustav had acquaintance with Sigmund Freud who no doubt pointed out that the early loss of her gifted father just might have been responsible.
The saddest part of her story is that Gustav insisted she abandon her musical gifts and so we were left with just a small output, all of which deserves a wider hearing. How fortunate we are that we got to hear four of the five songs from her Fünf Lieder. Her settings of texts by Richard Dehmel, Otto Julius Bierbaum,  and Heinrich Heine were filled with invention and eroticism. Raised on rhyme and scan, we related best to the Heine text "Ich wandle unter Blumen".
The songs were brought to life by the elegant mezzo-soprano Rebecca Ringle Kamarei whose precision with German was that of un eingeboren. Consonants were crisp and every word was given meaning.  Add to that her rich timbre, meaningful phrasing, and elegant stature. It was not lost on us that her hairstyle and gown suggested the turn of the 20th century.
Her fine performance was accompanied by pianist Bryan Wagorn who was an equal partner throughout. We were impressed by Alma's writing of the piano part which shuttled between commenting on the text and contrasting with it. Mr. Wagorn's sensitivity mirrored Ms. Kamarei's.  These songs definitely merit further hearing.
We cannot recall whether we liked Gustav's songs as much upon first hearing as we do now.  Perhaps they seemed strange at first but the familiarity we acquired makes us respond more instantly than we did to Alma's songs.  We never tire of his settings of folk songs with their likable melodies and danceable rhythms.  "Rheinlegendchen" is just plain fun whereas "Ich atmet' einen linden Duft" makes the most of Rückert's sensual text. Both artists gave a nuanced performance.
The evening was rounded out by other interesting works.  There was a surprise introduction when pianist Adam Golka captivated our ear with a deeply felt performance of Chopin's familiar "Nocturne in E-flat Major". This had absolutely nothing to do with the rest of the program but Chopin is always welcome and Mr. Golka's sensitive touch and depth of feeling set him apart and  elevated this familiar work to a higher status.  We loved the expressive rubato, the dynamic variety, and the clearly articulated runs.
Three Pieces for cello and piano by Alexander Zemlinsky (who taught Alma when she was a young woman) were delightful in their variety and contrast. Mr. Golka was joined by cellist Brook Speltz and the two bounced melodies off one another.  The first piece was lyrical and melodic but incorporated a fiery section. The second piece was tender and melancholic and at times suggested gypsy music.  The third piece was a spirited tarantella during which it was difficult to sit still.
We were not nearly as enchanted by the final work on the program, Erich Wolfgang Korngold's Piano Trio, Op.1 in which Mr. Golka and Mr. Speltz were joined by violinist Adam Barnett-Hart. It is indeed astonishing that this child prodigy, so admired by all the musical figures of that period, could produce such an accomplished work, but it was not to our taste. It was filled with 20th c. angst and scarcely seems to have come from the pen of a 13-year-old. The motifs were fragmented and angular and we were unable to find a structure to latch onto.
We find the opera he wrote when he was 20 years old,  Die tote Stadt, more accessible and the film scores he wrote in Hollywood after fleeing the Nazis even more so.
In sum it was a fine evening and we left feeling entertained and enlightened, having been transported to the early 20th c. world of music.
© meche kroop
meche at 6:22 AM
Share